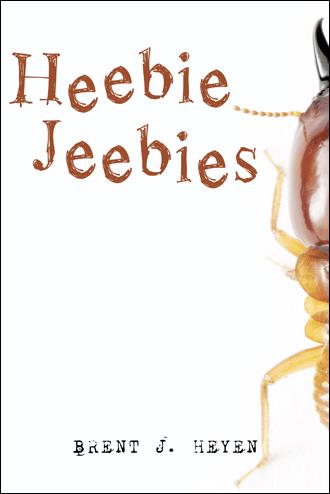 Em stands there a few minutes, letting her eyes get accustomed to the low light. She sets her keys on the kitchen counter, and then walks back to her room. Upon shutting her door, she disrobes, changes into her P.J.’s, and then crawls into bed. Grabbing a stuffed animal that she had on the bed, Em quickly drifts off to sleep.

Several minutes later, as if knowing that Em is sound asleep, a lone termite crawls out of a crack in her wall, and over to her. It climbs up her arm, and makes its way towards her face. Then slowly makes its way up her neck, and climbs up her chin. Em, as if sensing the intruder, stirs a little and rolls over on her side. The termite holds on for dear life, and once Em settles, makes its way for Em’s nose. It crawls in and starts slicing and dicing. Em wakes up with a start and feels something within her nose. Blood is streaming all over her. She instinctively presses her finger up against the opposite side of her nose and blows.

A stream of blood, as well as the termite, jet across her bedroom. With her nose gushing blood, Em pinches it shut and makes her way to the bathroom. She grabs a wash cloth and runs cold water over it; then pinches her nose shut with it. Flinging open the door, she is blinded; her eyes having adjusted to the light. As a result she doesn’t see the termites flowing out of the various cracks in the walls. The one that was in her nose also is crawling towards her; the blood clotting on its surface. As they begin crawling on her feet she begins shaking them one at a time, and stomping them as she switches to the other. Despite her efforts, swarms of termites begin crawling up her legs. Em can feel every move they make, as well as every bite they take. By this point she is screaming and swatting frantically. As the swarm envelopes her head she gets off one last scream, but the termites rush in her mouth, and down her throat, choking it off.

A pounding noise from Em’s front door is heard throughout Em’s trailer. Em quickly sits up in her bed in a cold sweat; her heart is racing, and she is breathing heavily. The pounding noise is heard again, and Em, having started calming down, gradually gets out of bed. As she does so, she hears a crawling noise in her walls. Once she realizes what it is, she makes her way to her bedroom door and opens it. Her hallway walls and ceiling are crawling with termites. Terrified, she flips on the light, and the hallway is completely clear. “My mind must be playing tricks on me,” she thinks to herself.

The pounding noise on her door gets even more desperate. Then Em hears a voice saying, “Em, Are you okay?” and she races for her front door. Upon opening the front door, she sees Mrs. Migill standing there. “Hey Em,” Mrs. Migill says, “are you all right? I heard screaming so I though maybe something was wrong.”

“Are you sure? Look at you, you’re shaking.”

“That must have been some nightmare.” As Mrs. Migill finishes her comment a termite crawls out of her left nostril and makes its way toward her ear. Em stands there in horror as Mrs. Migill begins to say, “What’s wrong dear?” but halfway through she bunches over as if she is punched in the gut. Em asks with a concerned voice, “Are you all right?” Mrs. Migill stands up and Em sees several moving bulges in her face. Then Mrs. Migill winces, as her belly bursts open. Thousands of termites spill out with her entrails, and she stands there with her belly hollowed out for a few seconds before falling over dead at Em’s feet. The termites seem uninterested in Em as they feast upon Mrs. Migill. All Em can do is stand there staring at her neighbor and scream.

Sitting up in bed, Em is drenched in sweat. She even notices that her sheets and blankets are drenched as well. “I hope this is all from sweat,” she says to herself. Suddenly, she gets the urge to call Mrs. Migill. She reaches for her phone, and dials Mrs. Migill’s number. Placing the receiver into position, she hears it ring a couple of times and then, “Hello … hello.” Em hangs up the phone.

Relieved, she allows herself to exhale. It was just a dream, a terrible, terrible dream. Em was glad that Mrs. Migill was all right. She may have been a little to nosey, but she was more like a mother figure to Em. Just then, as her heartbeat and breathing normalized, she starts hearing that noise in her wall, the same crawling noise. “No! … No! … I’m dreaming again,” she tells herself. Getting up, she makes her way to her bedroom door. Upon opening it, a view from her nightmare is waiting for her. The walls, ceiling, and even floor are crawling with termites. She reaches for the light switch and flips it; the hallway remains in darkness. Growing in panic, Em begins flipping the light switch over and over. Believing that her only hope is to reach the front door, Em sprints for it, squishing termites as she goes. About halfway down the hallway, she slips on the mush beneath her bare feet. As if her fall sends a signal, it immediately starts raining termites. Em rolls over and immediately opens her mouth to let out a scream, but a termite falls right down her throat and prevents it. Before long there is nothing but darkness.

It all starts with a bloodcurdling scream in the night. Just a short time earlier, teenagers Frank and Joe were discussing their upcoming double date with the Litzner twins. Now Frank is dead and Joe has no idea why. Even worse yet, Joe is now a suspect in Frank’s mysterious death. What Sheriff Jon Bigs doesn’t realize at first is that the scream is the start of an onslaught of attacks that will take several people in his town before it’s over, including a few who are dear to him. As he begins digging into the cause of the assaults, Sheriff Bigs must summon help from Dr. Simon Holloway, a specialist from a nearby university and Elliot Radcliffe, the local exterminator he has hated for years. But will the sheriff and his men be able to stop the attacks before the horror spreads and it is too late for more innocent victims? Heebie Jeebies shares a skin-crawling tale of terror as screams resonate throughout neighborhoods while a local sheriff desperately attempts to stop a series of shocking attacks.

Brent J. Heyen is a longtime lover of a good story. He grew up in rural Nebraska where he developed an interest in science and a passion for writing. Today the former science teacher enjoys writing believable tales that prompt a good case of the heebie jeebies. Heyen currently resides in Lincoln, Nebraska. This is his first book.