A Case for Unicorns 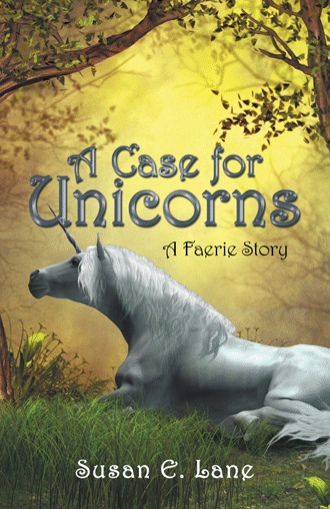 "A fairy? You're a fairy?" Erin exclaimed. "I thought fairies had tiny wings and were, well, a bit prettier."

"Ahh..yes, but those would be your lady faires," he replied.

"So why can't you give us your name?" I asked. He sighed and shook his head at my ignorance and said, "If I tell you my name, then I have to tell you my story, and well, you know what happens then..."

We all looked at each other, puzzled. "What does happen then?" Savannah asked.

He looked very solemnly at the four of us and said, "Then I can't set you free until you help me." We looked at each other and I laughed nervously and said, "What do you mean 'help you?' Are you in some kind of danger?"

help me save a unicorn or two."

"Unicorns?!" the children exclaimed."Now I've heard everything!" Erin quipped, putting her hands atop her head.

"Unicorns? There are unicorns?" Kellen inquired.

"Well sure! At least there were unicorns at the beginning of the world."

"Well, what happened to them?"  Savannah inquired with great interest.

"Well, I'd be happy to share the story with ya for a little bit more of that fairy food, and of course, ya must give me your solemn word."

"Our solemn word?" Erin asked. "What do you mean?"

"Your solemn word that once ya hear my story ya will do whatever it takes to help me," he replied.

The children replied in unison, "Yes, of course we will!" but my face was in my hands at this point trying to grasp everything I was hearing. I quickly countered, "Whoa, wait a minute! Before we make any promises, what's involved?"

"All ya have to do is help me to plead my case before the judge. That is all," he said, avoiding my gaze and thereby making it evident that he was hiding something. I narrowed my eyes and crossed my arms, looking at him intently. "Where is this judge, Mr. Fairy?"

"Why he's not very far at all! A day's journey ought to cover it."

"A DAY?!! An ENTIRE DAY?!! I sputtered indignantly. "You expect me to tell their parents that I'm going to take the children on a day trip with a leprechaun that showed up out of the blue and asked for help? And how exactly are we supposed to get there? I suppose you have some pixie dust under that cap of yours to help us fly there?"

"The fairy looked smug. "Pixie dust is not my preferred method of transportation, I'll have ya know, and ya wouldn't begrudge me a day's journey if ya knew how important the matter at hand was!"

"It's out of the question," I commanded. "There's no way we're going anywhere with a little man that shows up out of nowhere with a wild story about unicorns that need to be saved. We don't know anything about you! How do we even know we can trust you?"

"Because I gave ya my WORD!" he fumed.

"That's it? Like your word is some magical thing that we're just supposed to believe because you say so?" I felt myself sneering.

"That's right. Every fairy must uphold their word with the highest honor, otherwise the unspeakable happens!"

"I dare not say," he stated matter-of-factly, and bit his pipe stubbornly.

"Ugh! You are the most difficult little man! Either you tell me what happens if you don't keep your word or I'm going to throw all this fairy food into the garbage!"

"Oh, ya wouldn't! Alright, alright! I'll tell ya! If a fairy fails to keep his word he loses that which makes him a fairy."

"Let me guess. By that you mean your magical powers, right?"

"Well you are an unusual little man Mr. Fairy but we have yet to see you do anything magical," I said. "Now if you'll excuse us I think we need to get inside," and with that I made a quick motion to the children with a look that left no room for discussion.

The fairy put his pipe back in his mouth, crossed his arms and winked, looking straight at me. Suddenly, I felt something pick me up and drop me right at the top of the slide.

"Whoa!" the kids said, gaping. "Do it to me!" Kellen pleaded, and in another wink the fairy plopped him right on top of the jungle gym.

"OK, so you've got a little magic in you," I said nervously, and with hesitation I added, "Alright. What is it you want us to do?"

"First ya must hear my story, and then I'll tell ya how ya can help me," he said.

"So you're giving me your word?" the fairy asked intently.

"Tell us your story and we'll do what we can to help," I said resignedly, not knowing what other tricks this leprechaun had up his sleeve. Best to keep him happy.

"That's mighty hospitable of ya! Thank you! Now let's start from the beginning," and with that, he kicked the twig out from under the fairy castle, resumed his perch, lit his pipe and began.

Unicorns exist only in books, on television, and in movies. But what if they were real? And what if we could help them return to earth?

In author Susan E. Lane’s book, A Case for Unicorns: A Faerie Story, what starts as an ordinary day turns into much more when a leprechaun is found in a backyard. He wants to ask God to bring back the unicorns, which were lost during the great flood of Noah’s time, and needs their help. He and the four unsuspecting humans embark on the dangerous road to heaven to bring their case before God for a return of these mystical creatures.

A Case for Unicorns: A Faerie Story combines popular characteristics of fairy tales with elements of Christianity. Young children will enjoy it as a fairy tale as well as a reminder of Noah and the ark.

Susan E. Lane’s debut publication, A Case for Unicorns: A Faerie Story, is her personal triumph. She struggled with health issues that prevented her from writing, but doctors now call her recovery a miracle. When asked the secret to her recovery, she says, “Jesus. All the way.” She currently resides in Brookline, Massachusetts.