I am a Child of God, and I Am Woman 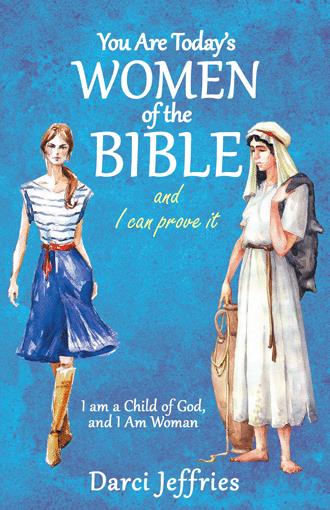 I AM A CHILD OF GOD AND I AM WOMAN
This is not a woman's lib book for women of the bible.
So, why write this book about women of the Bible which does not always make men look the best? The reason God has led me to write this book is to help both men and women to recognize the important roles women played in the Bible. Because of those women and the roles they played in biblical history, we women, no matter what age, what level of education, what financial status or whatever we use to measure ourselves against other women, still have an important role to play in influencing people for God's Kingdom.
We are today’s women of the Bible!!! (and I can prove it)
The goal of this book is not necessarily to get more women in the board room but to get more women working with others for God's Kingdom. “The harvest is plentiful but the workers are few.” Matt 9:37
We should not compare ourselves to one another. God has made each one of us our own person with our own calling or destiny. When we start to compare ourselves to others, jealousy can become a byproduct of that comparison. But, we do compare.
Marvin Williams, one of the authors who contributes to Our Daily Bread wrote an article titled Comparison Obsession. He wrote:
“Comparison obsession isn’t new. The Scriptures warn us of the dangers of comparing ourselves to others. When we do so, we become proud and look down on them (Luke 18:9-14) Or we become jealous and want to be like them or have what they have (James 4:1) We fail to focus on what God has given us to do. Jesus intimated that comparison obsession comes from believing that God is unfair and that He doesn’t have a right to be more generous to others than He is to us. (Mt 20:1-16)”
He continues: “By God’s grace we can learn to overcome comparison obsession by focusing on the life God has given to us. As we take moments to thank God for everyday blessings, we change our thinking and begin to believe deep down that God is good.”
You need to be you. Like teenagers, sometimes as adults, we want to blend in instead of standing out. If God wanted us to be the same, He would have created us as so. But He didn’t do that. There is a job for each of us to do. A reason He put us here.
When speaking about people who work for God's Kingdom, I also include, and laud, those women who feel the Lord wants their ministry to be their husband, children and maybe a neighbor or relative or two. Not all of us are to be a Joyce Meyer. If we go outside of our assigned field, we will not be successful. Some mother had to raise Mother Theresa. Some wife is standing strong behind her pastor husband who is positively affecting those 30 parishioners who make up that small church. And out of those thirty parishioners will come 10 missionaries who bring in hundreds of workers for God's Kingdom.
I would love to outlaw the statement--'I am just a housewife.' When you are obeying God's direction in your life, you will be blessed while here on earth. When you get before God in heaven and need to account for your days on earth, He will honor you for your obedience. Never, never allow yourself or anyone else to put you down as 'just a housewife.' You are an obedient servant of God and as such deserve respect!! I AM A HOUSEWIFE!!
Here are examples of what “JUST” housewives can do.
Eunice and Lois-Mother and grandmother to Timothy
Paul felt he could trust Timothy with the responsibility of other Christians because of what Timothy was taught as a child. (2 Tim 1:5) His grandmother Lois and mother Eunice instilled faith of God in Timothy as a child and that faith was still in Timothy's spirit when he became part of Paul's group of disciples. Timothy was instrumental for the growth of God's Kingdom.
Hurray for grandmothers!!!! As my grands are heading out into the world, the best thing I can do is pray, pray, pray. I want to keep them physically close but am so proud of the adults they have become working for our Lord's Kingdom. While my heart hurts to not be able to 'cuddle' them anymore, my spirit rejoices with pride to be able to share them with the world. Tears of mixed emotions are a cathartic helping me to release them to their calling and to God. For some reason I am finding it harder to let go of my grands than my sons??
I like to think we influence or at least set in place things which help our grandchildren to become who they are in Christ. I know for sure that a grandmother’s prayers work!!
As Ps 71:18 says, “Now that I am old and gray, do not abandon me, O God. Let me proclaim your power to this new generation, your mighty miracles to all who come after me.”
Jochebed- The mother of Moses, Aaron and Miriam.
These siblings were chosen to lead the Israelites out of bondage. (Ex 6: 26, 15:20) Plus Aaron later became the high priest and his family continued to perform the duties of the priesthood. Miriam was also known as a poetess, musician and as involved in the Israelites escape from Egypt as her brothers.
As a mother myself, one must stand amazed at what Jochebed must have instilled in her children to have all three become who they were. All honored God. She could have been angry with God that Moses was taken from her as a baby. But she honored the fact that Moses appeared to her to be a gift from God. Jochebed is also known as one of the heroines of faith. (Heb 11:23)

When Jesus was on earth, he did nothing to indicate women were second-class citizens. For example, he asked Mary Magdalene, at one of the most critical times in his life, to be the disciple to announce his resurrection. Yet somewhere in history, women have been made to feel like they shouldn’t be pastors or leaders of the church because of their gender.

In You Are Today’s Women of the Bible and I can prove it, author Darci Jeffries shows women are just as much a child of God as anyone, no better than men and no worse than men. Through a variety of Biblical entries and scriptures, she recognizes the important roles women played in the Bible and how today’s women still have significant impact influencing people for God’s kingdom. Jeffries notes the influential female of the Bible such as Jochebed (Moses’ mother), Esther, and Rebekah, and shares how it’s because of those women and the roles they played in Biblical history, that today’s women have the same level of influence.

Inspiring today’s women to achieve all they can, You Are Today’s Women of the Bible and I can prove it seeks to get more women working with others for God’s kingdom and to help them understand how important they are in God’s workplace.

Darci Jeffries is a retired registered nurse, a lay Christian counselor, God’s ambassador, and women’s advocate. Jeffries lives in Lancaster, Pennsylvania. She has has two sons and daughter’s-in-law, six grandchildren.