The Curse of the Fallen:

Battle at The Crossroads 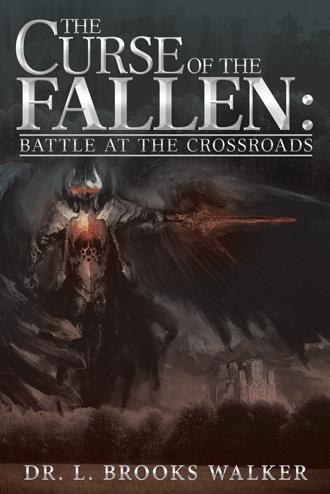 Hebrews 12 says there is a great cloud of witnesses around us, but there is another cloud, one less spoken of, but just as real. It is a cloud of evil and terror that follows and watches every move we make, not for the sake of faith but for destruction.

How do I tell what I have learned and experienced for even as I sit here I can sense their presence all around? It's like a sick feeling in the pit of my stomach to which I have grown accustomed. It is my troubling constant companion that I can never be rid of.  I am not sure when it started or where but as I look back on life it seems that this feeling which I have come to know as a presence has been with me since my childhood. My grandmother used to say that some have the "whitchy way" and she would look at me with a muted smile and a look of concern. My mother had it and I suppose I share that ability to sense and hear the invisible and often inaudible sounds that most people just ignore.

I can only assume that this ability is what has brought me to this point. The greater mystery is why they have decided to open themselves up to me. I assume it was with the intention of swaying me to their cause, or simply have someone in human form with which to converse and experience life. I have never felt close to being overcome by their spirit and yet I have been seduced by their presence. Their methods are complex and deeply deceptive and I realize that I should ignore any thought of them but they persist in offering their unholy contract. I have made an ally in one who was once in their grasp completely, but has now come to his mind, and has rejected their presence in his life and for his help and information I am eternally grateful. He often says I saved him from them, but from my perspective the rescue has been mutual as he has kept me focused and centered on the task that we have had thrust upon us. Just what that task is not yet completely clear. As I look back on life I see that no matter what occupation I was involved in, the fallen ones were always present and reaching out to me.  Even now I sense their presence.

I understand now why many who have had similar experiences don't like to discuss it openly, and yet long to scream it out so that others will know, but that would only list me among the oddities of humanity like those who see bigfoot or are abducted by aliens. I must tell this story somewhere and so writing it down is my outlet. Will anyone ever read my thoughts? I do not know, but it is therapeutic just putting them on paper. I know that when someone thinks of the word demon they immediately have visions of Hollywood special effects and hideous monsters inhabiting the closets. I have come to understand what it means to be perfectly possessed and partially possessed or demonically influenced. These beings are evil spirits with a knowledge base that is naive in some ways, but in other ways is much deeper than our understanding. They have seen things and experienced things that we will never understand until we move from this life to the next, yet they lack understanding of what we see as some of the simplest of emotions like love, faith and grace. They are frustrated to the point of rage at the concept of grace and forgiveness and this more than anything fuels their actions. These actions take the form of so many plots and methods of subterfuge that it is near impossible to keep an accurate and comprehensive record. Theirs is an evil so complex that we mere mortals cannot stand against their wiles. We flatter ourselves for our knowledge and courage as warriors of God fighting evil on earth, and yet that is the first step towards our destruction for it is the path of pride. Pride is the very pathway they wish for us to take as they lead us deeper into their deception. There is only one sprit that can overcome the demonic spirit of the Fallen ones and that is the Holy Spirit. We can have that spirit, but we must never allow ourselves to trust our own power.

And so, it begins. What have I learned so far? Fist; there are no such things as ghost there are only demons impersonating the dead. Second these demons seem to have a limit to their power, they can influence, coerce and deceive people into actions and manifest themselves into visual, but metaphysical forms. Third they communicate with one another across vast spaces so that what is heard in one place can be conveyed to another in a split second which explains how mediums can seem to know details of actions and conversations that may have occurred between two people when they thought they were alone. The fact is we are never alone. The fallen ones are always around us, watching… waiting for an opportunity to influence us into some action that fits their plan. And last, their plan. Their goals are destruction and lies, they will tell nine truths in order to gain trust for the moment they can tell the one lie that will lead to our destruction. Sadly, many are duped into thinking they have a friendship with a dead relative or ancient mystic and it strokes their ego into becoming a willing accomplice.

I will continue to chronicle my involvement with the Fallen Ones through various episodes and events in my life. I am beginning here with the realization I experienced at a battleground memorial outside Lancaster, South Carolina called Buford’s crossroads.

It is 1780 in the Buford battlefield. After British soldiers find a boy wounded and dying, they do not provide him with peace. Urged on by the malevolent spirit, the British torture the boy, leaving him to lie unnoticed and unburied for years. His only monument will be the barn that is erected one day over his bones—the future haunt of the demon known as Lerajie.

Over two hundred years later, Karen Hedrick finds her young daughter lying in shock on her barn floor and a strange, green-clad figure seemingly standing in the corner. After she scoops her daughter up and flees, the sheriff’s department begins investigating. As a complex puzzle unfolds without a clue in sight, Karen’s husband suddenly turns up dead in a parking lot with a pair of binoculars around his neck and a deceased dog in the trunk of his car. After the investigation leads to nowhere, a university research team eventually begins investigating supernatural occurrences in the area. But what no one knows is that a determined demon has claimed the former battlefield as his home and is using the innocent to perpetuate evil.

In this riveting tale, a demon brought to life during the Revolutionary War reigns terror on a modern community some two hundred years later.

Dr. L. Brooks Walker draws from personal experiences as a minister and teacher to offer a study on the supernatural and demonstrate how people become engaged with evil behavior either purposefully or without awareness. He holds masters degrees in music and in divinity as well as a doctorate in ministry and resides in Heath Springs, South Carolina. This is his first book.