The Abbey of the Holy Ghost

Margaret of York, Charles the Bold, and the Politics of Devotion 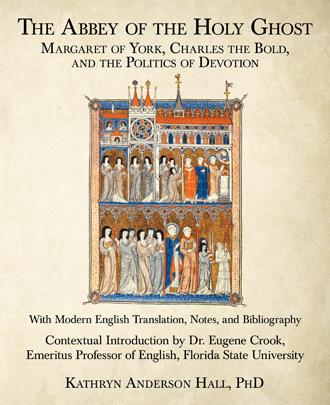 On June 14, 1468, Margaret of York departed from London aboard the New Ellen bound for Flanders and her forthcoming marriage to Charles the Bold, Duke of Burgundy.  Behind this marriage lay economic and political concerns that were rooted in the turmoil of the Hundred Years’ War between France and England that ended in 1453, and the Wars of the Roses still underway in England.  During this period, English merchants amassed wealth in providing wool for export, particularly to Burgundy where merchants oversaw the creation of textiles that were subsequently imported into England for sale.  Previously, according to M.-R. Theilemans, Chef de Travaux aux Archives Généraux du Royaume de Belgique, England had enriched her coffers at the expense of the Netherlands by an unequal trade exchange of silver and gold, and had banned the importation of Burgundian merchandise in England.  The Duke of Burgundy responded to this imbalance with a prohibition against English cloth. The marriage of Margaret of York and Charles the Bold sought to restore a balance in trade, and in 1469, a treaty between the two countries assured more financial parity in the market place.

In addition to the economic and political instability surrounding these conflicts, there existed Charles the Bold’s determination to connect his scattered lands into one powerful state and to be crowned Vicar of the Empire or King of the Romans.   With his marriage to Margaret of York, Charles the Bold sought to renew an Anglo-Burgundian alliance that might thwart the ambitions of Louis XI of France who hoped to expand his kingdom to include lands under Burgundian control.   In addition, because both Edward IV of England and Charles the Bold relied heavily upon loans from wool merchants in order to finance their military campaigns, they attached great importance to the upcoming Anglo-Burgundian marriage alliance  which would affect the economic and political ambitions of both countries.

Predictably, Louis XI, recognizing the benefits inherent in an Anglo-French alliance, sought to disrupt the wedding negotiations by proposing four possible candidates for Margaret’s hand, one of which was Philip, Count of Bresse (Louis XI’s brother-in-law).   At a conference near Rouen in 1467, the French king offered to provide the bride’s dowry, pay all costs of the wedding, give Edward IV a substantial pension, give trade concessions to English merchants, and consider a treaty dealing with economic and political concerns.   When Louis’ offers were rejected, he persevered in his efforts by seeking to obstruct dowry loans, by trying to block the necessary papal dispensation, and by spreading unfounded rumors concerning Margaret’s chastity.

Against this backdrop of political intrigue, Margaret of York entered into a marriage with the Duke of Burgundy that strengthened Charles the Bold’s position politically, at least in the short term.  The marriage began with a lavish display of Burgundian wealth amid newsworthy festivities  and became the impetus for the creation of the Bodleian Library Douce 365 manuscript commissioned by Margaret of York.  With this union, the personally devout Margaret would undertake the religious education of Charles’s eleven-year-old daughter, Mary, a duty that Margaret took seriously as evidenced by her generous actions on behalf of the convents and by the closeness the two women shared later, after the untimely death of the child’s father. This duty would include the inculcation of Christian virtues, a task that would be significantly supported by reading the spiritual advice of the allegorical figures in the Douce 365 L’Abbaye du saint esprit.

The Douce 365 manuscript contains several devotional works as well as a lengthy version of L’Abbaye du saint esprit addressed to both males and females that encourages spiritual formation in those who “want very much to be in religion but cannot….”   The Douce 365 treatise also contains significant additions over previous French versions of the text that, when viewed within their political and social context, render clear the intention of this redaction’s scribe, David Aubert, to impart not only a spiritual message to the influential duchess but a political one as well.

L’Abbaye du saint esprit is a medieval devotional treatise written for those who “would like to enter into religion but may not” for various reasons. The treatise seeks to aid the uncloistered reader in living a spiritual life by creating, within the reader’s conscience, a metaphorical abbey in which each room represents a Christian virtue or a charitable act. After meditating on the metaphorical abbey, a devout person could symbolically carry its spiritual lessons out into the secular world.

The Abbey of the Holy Ghost: Margaret of York, Charles the Bold, and the Politics of Devotion uses original French and English manuscripts to investigate this medieval devotional treatise, which was popular in both France and England and reflects the political and devotional movements of the period—especially those observed in Margaret of York’s life after she married Charles the Bold, Duke of Burgundy. Special consideration is given to additional material in the Douce 365 L’Abbaye du saint espirit commissioned by Margaret of York upon her marriage.

In addition to offering discussions of matters pertaining to the original audience of the devotions, its Victorine influence, the English lay devotion, the devotio moderna movement, and medieval women’s studies generally, author Kathryn Anderson Hall also provides a new modern English translation of the Douce 365 L’Abbaye.

This edition of L’Abbaye du saint esprit offers an authoritative survey of the text’s manuscripts and readership. Moreover, by setting the Douce 365 manuscript in its specific historical and political contexts and through detailed analysis, Kathryn A. Hall’s meticulous study argues convincingly that this manuscript sought to influence Margaret of York and her husband Charles the Bold to soften the harsh treatment imposed on Charles’s territories. In so doing, Hall reminds us that despite mysticism’s professed separation from the world, it is and always has been a practice with deeply significant effects in its historical and political worlds.

Dr. Kathryn Anderson Hall is a Medievalist who currently writes, lectures, and gives workshops on aspects of medieval literature, especially that literature concerning the medieval mystics and saints of the Church. She holds a Ph.D. in Medieval Literature from Florida State University as well as Master’s and Bachelor’s degrees from Virginia Tech. While working with variations of The Abbey of the Holy Ghost in Old and Middle French as well as in Middle English manuscripts, she became interested in the medieval mystics, especially the women of that era who experienced their spirituality through bodily and emotional experiences.

She has served as an Instructor and as an Adjunct Professor of English at Florida State University, taught as a Medievalist in the English Department at Valdosta State University in Georgia, and currently teaches Medieval Literature classes, contractually, for Florida State University’s Osher Lifelong Learning Institute (OLLI). In addition, Dr. Hall gives lectures and leads workshops on the medieval Christian mystics for private groups, upon request.