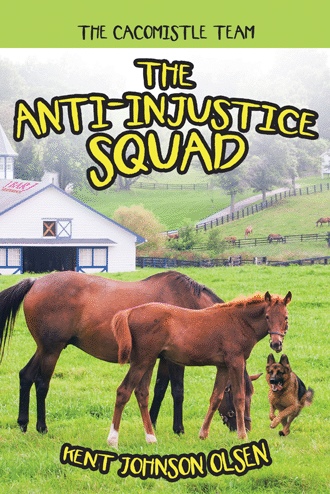 Corky and Jinx reached the cliffs overlooking the long valley. They laid down.
Lila and Riley ran up, panting, and joined them.
“Now we wait,” said Lila, taking deep breaths.
A tall young man reached out of the bushes and grabbed Riley by his left hand.
“Hey, quit it,” screamed Riley.
Corky leaped and clamped his teeth on the man’s arm.
“Ouch,” yelled the young man, hitting the dog’s nose with his right fist. Corky let go and stood between Riley and the man in the bushes.
“Riley, pet Corky,” said Lila, concerned
Riley reached over and stoked the dog’s head. “Good Corky.”
“Looks like he got away,” Lila said.
Zeke ran u and joined them. “What happened/”
“Somebody grabbed me,” said Riley.
“John,” said Zeke into his walkie-talkie.
“Go ahead, Zeke,’ said John.
“A man attacked Lila and Riley. Corky drove him off. The trail ends at the cliffs at Lookout Point,” said Zeke.
“Who was the attacker?”
“It was Chip,” said Lila.
“Zeke, Lila and Riley. Search the cliff area. John out.”
Zeke glanced at Riley. “You wear the airplane pack instead of the mountain pack? Why?”
Lila laughed. “You picked up the wrong pack.”
“Oh,” said Riley, turning red with embarrassment.
Zeke and Jinx moved right along the cliff.
“Corky, come. Let’s go left,” said Lila.
The two girls moved along a dim path which circled the iom of the canyon. They heard a faint voice.
“I don’t want to,” said a child.
“Oh, come on. It’ll be fun,” whispered a male voice.
Riley and Lila stepped into an open area. A man stood with a hang glider strapped to his back. A young girl slapped the man’s hands, screamed, and pulled back. She fell against Riley. Looking up at Riley, the girl jumped, wrapped her arms around her neck, and clamped her legs around a slim waist.
Surprised, Riley held the girl. “I’m Riley. I’m your friend. You are safe.”
Corky growled and moved between Riley and the man.
The man spun around. His glider wing knocked Lila down to the ground. Corky jumped out of the way. Stepping forward, the man spun the glider, hitting Riley in the back, pushing her and the little girl off the 200-foot cliff.
Corky raced to the cliff edge and barked.
“Oh no, John!” Lisa called on her shoulder comm unit.
“John here.”
“Riley and little girl were pushed off the cliff by a min in a hang glider,” said Lila.
“Do you see them?” asked John.
“No. They’ve disappeared.”

EVERY PERSON BORN ON THIS EARTH
HAS THE RIGHT TO WALK THROUGH LIFE,
UNMOLESTED, UNAFRAID.
—SENSI J.R. JENSEN, 1981

Roommates, Riley and Lila searched mountain cliffs for a missing five-year old girl.
They see a man with a hang-glider on his back.
“I don’t want to go” said the little girl.
The roommates rushed forward.
The little girl jumped on Riley, arms around her neck, and legs around a slim waist.
The man dipped his wing, knocked Lila down, and pushed Riley and the little girl off the 200-foot cliff, as he leaped into the air and flew away.


Today, young people face many challenges. They often feel helpless amid turmoil, including violence. It seems as though there is nothing they can do to change things. But what if that wasn’t the case.

In his novel The Anti-Injustice Squad, author Kent Johnson Olsen tells the story of a group of young people making a difference. Gathered at a ranch, they work together to help others. The group is composed of admirable characters, including Riley. She does not let her physical scarring hinder her from taking risks and helping others. Although the situations confronted in The Anti-Injustice Squad probably will not be familiar to your life, the relationship between Riley and the other members of the squad shows how even young people can change things for others, including standing together against bullies. You, too, can make a difference.

Kent Johnson Olsen took a martial arts class with his four daughters in 1981. It lasted eighteen months. The theme was to use the lowest level of force to get out of a dangerous situation. He promised Sensei J. R. Jensen to write a martial arts novel, and Sensei gave him permission to use low-level moves in the story. The author uses imagination and fiction to help others.

Kathleen Olsen studied martial arts as a teen. At the University Mall, an unknown six-foot teen boy wrapped his arms around her in a BEAR HUG. Kathy grabbed his elbow, leaned forward, and threw him on the floor on his back in front of her.
“I’m sorry. You’re NOT…” The embarrassed young fellow jumped up and disappeared into the mall crowd.