by Carol March McLernon, With David Schupbach & With James McLernon 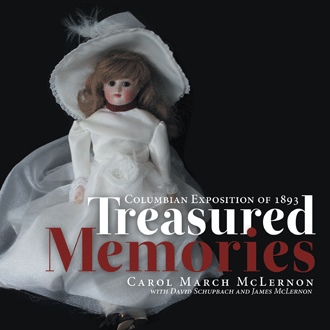 In 1893, a world’s fair was held in Chicago to celebrate the four hundredth anniversary of Christopher Columbus’s discovery of America. To say it was big would be a huge understatement. It was so big it spilled into Lake Michigan, and the Ferris wheel was six stories taller than Chicago’s tallest skyscraper. Thousands of fair visitors took home wonderful treasures, including tickets from the four gates, ribbons, flags, coins, stamps, and a certificate to verify the bearer rode the world’s first Ferris wheel.

In her book Treasured Memories, author Carol March McLernon takes you on an exploration of the Columbian Exposition, which marked an explosion is science, mechanics, and industry. It paved the way for women’s rights and African-American rights as well as city beautification and sanitation.

Treasured Memories shares the long-lasting reminders of the Columbian Exposition, including the Museum of Science and Industry, the Art Institute of Chicago, the Yerkes telescope, and the Norway Building. Reading this book would make history fun.

Carol March McLernon earned a master’s degree in reading education and taught reading in Lake Geneva, Wisconsin, schools. She is inspired by history, especially of her native Wisconsin. She is the author of several books, including Katie Down the Pike, Adventures with Jack, and String of Hope. She and her husband, Bob, adopted a Siamese cat, who became the protagonist in her bilingual book, Naming the Tiger/Llamamos el Tigre.