The Calamity of Israel’s First Crown 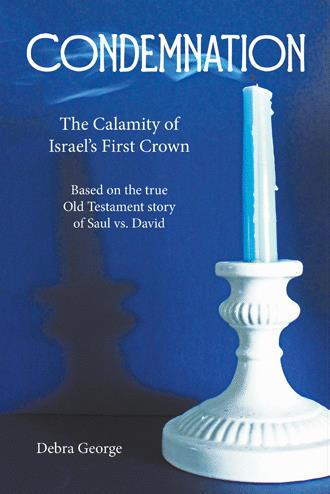 The ghost of the late King Agag looked like he had just stepped out of a nightmare, reflecting a living corpse that had patches of rot strewn about a dehydrated skin so white it resembled a shaved goat. He even lacked eyelids, which theatrically added to his frightful grimace.
The room was entirely black except for the glow of the dead monarch, but the spillover from his glare made visible Saul’s spear that was perched next to the bed. The spirit tried to reach for it but his mist of a hand floated through it. Despite the failed attempt, he gave Saul a snakelike smile and said, “You didn’t think that you could get rid of me forever, did you?” The specter lost his reptilian grin as he stared directly at Saul’s bed. “I have been denied the privilege of resting in peace.” His eyes popped back to Saul. “Just as your own peace is now denied you as you live. You’ll never be rid of me!”
As Saul tried to crawl on convulsing hands and knees across the floor to get away from the ghost, each trembling hand took a turn to blindly sweep in front of him for anything that could aid his rescue. But both empty hands repeatedly encountered nothingness.
“I warned you that you should give up your crown,” Agag went on, walking around the spear as he continued to eye it, “and that God had already replaced you. Yet you chose to disbelieve me.”
He cast a look at Saul. “But you can’t ignore it anymore because by now you’ve figured out the identity of the one who is taking your place.”
Saul’s frantic shaking continued to make speaking difficult. But he succeeded in producing a raspy voice that said, “There is no one taking my place! You have lied! Now leave me!”
Agag shook his head condescendingly. The movement produced a slippery sound as gooey juices seeped out of decay sores in his neck. “And all this time, right in front of your face.” He leaned toward Saul and hissed, “Surely you have guessed by now that your replacement is your own son-in-law, David!”
All of Saul’s motions, even his trembling, ceased. His face lost color, making him as pale as Agag.
Agag incited, “Come now! You’ve heard how your troops flock to him, and you’ve seen how your people, even close members of your own family, love him more than they love you.”
“David…” Saul breathed, his jealousy now overpowering any fear as he remembered how much more joyously his son had greeted David than Jonathan had his own father. Agag laughed, slithering closer to the spear.
“David…” Saul muttered again, thinking about how David’s fame had now spread throughout the region with foreigners themselves now singing that insulting song about his killing more Philistines than Saul.
Agag’s taunting laughter grew louder with both arms spasming for either hand to grab the spear.
Overcome by responding hysteria, Saul covered his ears, jammed his eyes shut and screamed, “David!!”

“…As God as my witness, I will be back for you!”
She tightly squeezed her sealed eyelids to ensure they stayed that way as she tried hard to picture the moment when all would return to the way it was supposed to be and David would safely come back to her. But Michal now knew the depths of her father’s temper; this horrid tribulation was clearly rooted in wicked envious spite—King Saul’s need to prove to all of Israel that he alone was the ultimate authority who could deliver a death sentence to anyone, including famed nobility in his own family.
Deep in her soul, Michal knew she would never again lay eyes on the man she loved. But when her husband’s hug started to loosen, she forced an encouraging smile for him to see, which was underscored by a nod. With the smile proving to be too difficult to retain, she turned away to let it fall as her hand once again hooked into David’s to drag him over to the dark window.
They looked out it into a shadowy world chiseled from the moonlight.
Michal gestured to a skeletal arm of the tree that grew within reach. “Climb out onto the branches and escape. Remember what I said: you need to keep running. Don’t look back, as it will only slow you up...,” she interrupted herself to hold back a sob.
As if dragging weights, David hoisted up onto the sill and bent himself to enter the window’s mouth. He slid one leg outside it, then froze to look back at her. They stared at each other for one last moment, each mouth opening to say something of reassurance, but words escaped them both.
He leaned back inward, grabbed hold of her head in the refusal to let go as he almost suffocated her with a passionate kiss. With her desperately returning the romantic gesture, they bypassed the need for any verbalization.
David unwillingly pulled his lips off her, took in a deep breath as if he was about to go underwater, then swung his other leg over to be fully swallowed by the window as he grabbed onto the tree. He swung his body about as he glided downward.
Watching the love of her life drop almost noiselessly to the ground, Michal began to heave. She covered her mouth at once to prevent uncontrollable sobbing.
Both stood frozen at their different levels, staring hard at the other in the moonbeams. Michal removed her hands and quietly moved her lips to convey, “I love you.”
She did not know if David saw the visually expressed words, as no sooner was she done moving her mouth to them when cloud cover shrouded the moonlight and all became darkness.
(1 SAMUEL 19:12)

As if in prayer, Michal recited, “I curse you, Father. May your tormenting continue. May your reward be condemnation for this. May you fall in disgrace, and my David rise in glory!”

MICHAL—She was supposed to be the official tie that bound Israel’s greatest warrior to its first king. But as no one can escape a clash of survival that pits the towering figures of her father, King Saul, against her husband, David, it is Michal who must come to grips with the fatal threat to her and her family as their nation edges toward civil war.

DAVID—As a keeper of sheep and slayer of Goliath, David was always at his happiest when serving the God he loved. He wins monumental battles to become Israel’s most celebrated military hero, but struggles with losing those who matter most to him in order to fulfill his destiny. Despair and emptiness are answered with God’s power to become one of the most famous Old Testament stories of all times.

SAUL—He had been given the historic highest honor as the Lord’s own selection to become the first king to lead the godly nation of Israel. King Saul was determined to bring Israel even greater glory while immortalizing his own name. But as self-preservation overcomes his judgment, Saul’s story becomes “Condemnation”—where deepening ego can only invite increasing torment from the God he had dedicated his life to serving.

Condemnation: The Calamity of Israel’s First Crown speaks to the world of today, one of political corruption, strange alliances, wars, passion, and betrayal—all of which are attached to the tremendous spiritual forces of good and evil. This epic Old Testament story prefigures biblical stories that were to follow while it mirrors the challenges of our present day.

As an American descendant of a Nazarene from the Holy Land, Debra George was born and raised in the Orthodox Christian faith. Throughout her life, history in the making has moved her pen around as a freelance journalist to record changes going on across the globe along with the subsequent reactions from those most passionately affected here in America. In 1988, she worked on an African-American news magazine, The Heritage, during Jesse Jackson’s climactic but unsuccessful bid to become the first African-American major party candidate for president. That same year, the Palestinian “Intifada” (Uprising) made headlines and she obtained reaction through countless interviews with Palestinian-Americans and people from all walks of life for her local television show Evening Arabesque, which she produced and wrote for five years. In 1989, when the Berlin Wall fell, she interviewed German-American reaction for a local radio station. During 1990-91’s Desert Storm, she broke down barriers to share Arab-American reaction on Evening Arabesque. Her interviews earned her an award from the Syracuse Chapter of the American-Arab Anti-Discrimination Committee (ADC) in 1994. Debra was the publicist for her parish’s Middle Eastern Festival for 30 years. She also worked public relations for PBS Celebrity Chef Julie Taboulie, America’s first TV Culinary Star with a lifestyle series about the Lebanese/Middle Eastern cuisine.