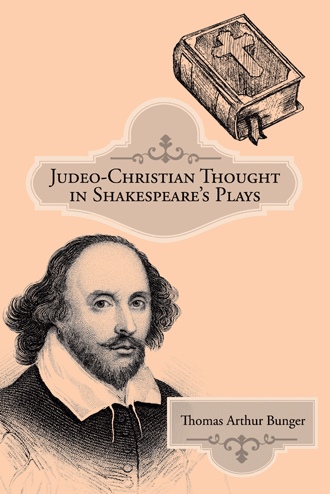 Shakespeare’s works contain some of the most time-honored truths in Western civilization, and Shakespeare himself was a forward-thinking, enlightened man who wanted us to explore the way things were during his life, suggesting that we could all be better than what we are by human nature. Yet these now-revered Shakespearean truths were not created in a vacuum, and though Shakespeare was a product of the Renaissance, the England in which he lived was heavily influenced by Judeo-Christian thought.

In Judeo-Christian Thought in Shakespeare’s Plays, author Thomas Arthur Bunger explores the continuing thread of Judeo-Christian thought that can be traced through the playwright’s work. He offers an in-depth look at ten of Shakespeare’s plays as they relate to morality in the King James Bible, with Hamlet, Macbeth, Othello, King Lear, The Merchant of Venice, Henry V, Richard III, The Tempest, Julius Caesar, and Romeo and Juliet forming the basis for finding this thread.

Shakespeare is not just a treasure of Western civilization; he is a treasure for the whole world, and his characters and their motives speak to humanity in general. There must, therefore, be something more to his insights than simply Western thought, and perhaps the inherent truth of living the godly life is what draws so many, everywhere, to Shakespeare.

Thomas Arthur Bunger has taught Shakespeare for forty-two years, including elective semester courses on Shakespeare for senior students. He has always had a passion for Shakespeare and his plays, and he is keenly interested in the relationship between Shakespeare and Judeo-Christian thought. Thomas lives in Arizona and is now retired, spending time with his grandchildren and keeping God and family first in his life. He accepted Jesus Christ as his Lord and Savior in March 1969 when he was sixteen, and he hopes Judeo-Christian Thought in Shakespeare’s Plays will influence people to live godly lives.