Don’t Put Water in the Hole! 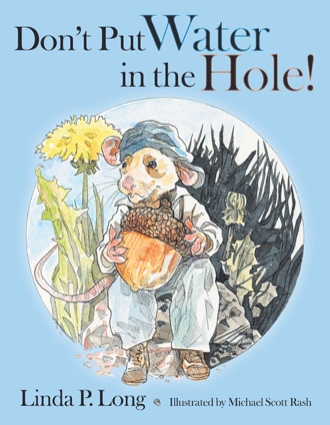 Mr. Bird had come back from the woods. He had warned all of the birds, and they were flying about all over the area telling other families. Mr. Bird told the Rat family that he had set up an emergency call to warn everybody in case there was danger. He also told them that he could watch from high in the trees and that he could see the whole farmhouse and area around it from the treetops. Then, if he were to give the emergency call, all of the other birds were to fly all over the farm and woods to warn the families to hide or to get indoors until the "all clear" sound came.
Pat Rat thought that this was a wonderful idea. This made her feel that with a warning signal, the children would also be out of danger. She had Mr. Bird to call out a message for an emergency council meeting to be in one hour just outside the honeymoon tree house cabin.
Everyone heard the message and hurried out to head for the woods and the little tree house. All of the families were asking questions like,
"What's wrong?" and "Is there a fire?"
Pat Rat told them to stay quiet and to hurry. After they all reached the honeymoon tree house cabin, the crowd gathered around Mac and Pat Rat.
Mac Rat told everyone his horrible story. Then he told them all to go home immediately to their children and to tell all of their friends and folks as they saw them on their way home.
The men told the ladies to keep alert and to stay close to their homes, as they all went back outside. They started to leave for different areas to tell their friends and families the terrible news about the old lady who just moved into the farmhouse.
Then, Pat Rat spoke up and stopped everyone who was leaving. She said,
"I must say a few things to you all before you leave.”
As she began, she got very shaky. She nervously said,
"You know, Mac Rat only saw a few jars that were from the old
wooden box the old lady had. I mean…”
She began to cry,
"Who knows what is in the other jars she was putting upon the
shelf!”
Suddenly, Mac Rat put his arm around his wife and said,
"Yes, this is true. I had to leave so fast to tell everyone. So, I am
sure that she not only had frogs, spiders, and bats, but no telling
what else she may have or might do!"

Sometimes the simplest of things can bring the most fun. If we know the right way to approach them. Have you ever wanted to pour water down a hole in the ground to see what critters might bubble out? Did you ever stop and think whose lives might be affected when you do?

Author Linda P. Long’s Don’t Put Water in the Hole! tells the story of the Rat family, who lives beneath us in the earth. This big family goes through lots of turmoil but shows love to each other through it all.

With Long’s words and Michael Scott Rash’s illustrations, you’ll learn more about their adventures both good and bad, funny and sad, and occasionally just a bit scary.

Linda P. Long is a self-proclaimed “hillbilly” from the Ozarks. Her humor and wit combine to tell a folksy story about critters. She is a mother of six children and grandmother of eight.