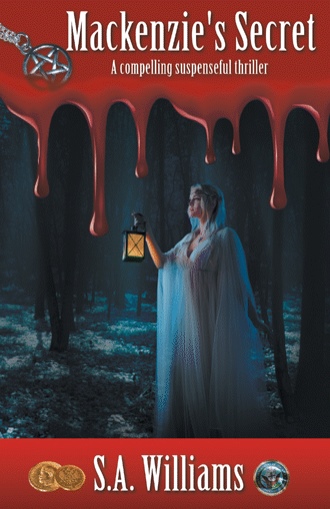 Mackenzie’s Paris was the Paris of 1969.

Sent to an all-girls boarding school, feeling abandoned, and leaving the boyfriend she loved behind, she confronted her new world with little trust. Her home became a French château fabled to have been a haven for the French Resistance. The Paris she knew was conflicted by its past and by its future. Mackenzie betrayed her own belief falling in love with a man she could never have. This Paris was a Paris full of secrets. The discovery of a hidden passageway and the legacy of a gold coin set off an adventure she would live with the rest of her life. What she found in Paris uncovered a forgotten mystery that haunted the foundation of all humanity. Now she has a dangerous secret—one that could change the world or destroy it. This is Mackenzie’s secret.

Having been educated in Brussels, Rome, Madrid, Paris and London afforded Williams the opportunity to earn her Bronze, Silver, and Gold medals from The London Academy of Dramatic Arts. A member of the Screen Actors Guild Williams worked on the sets of such notable films as The Age of Innocence, Philadelphia, The Sixth Sense, Unbreakable, How Do You Know, Rocky Balboa, Silver Linings Playbook and others. Her credentials in global marketing and management from The Wharton School-University of Pennsylvania and from Harvard Business School. After working in radio & network TV, she founded a media-buying company out of the Philadelphia region, noted for the production of radio and TV commercials. Anna’s Secret Legacy is the prequel to Mackenzie’s Secret.