Winner Of The Breeders' Cup 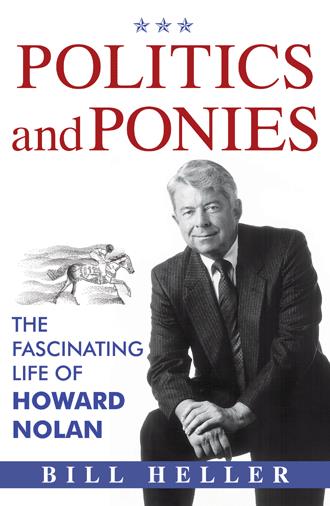 Make a wish and puff . . . It comes true. . . If you believe. . . In yourself. That's what happened to a young lawyer who wanted to make a difference. He took on a powerful political machine by standing up for the little guy. He made promoting better race relations in our society a priority in his life. Think Gregory Peck in To Kill A Mockingbird. The book takes an unusual twist as the subject's passion-- breeding and racing horses-- leads the reader on a global adventure culminating in the greatest thrill of his lifetime-- winning the most prestigious horse race in the world-- the Breeders' Cup Classic-- with a 133-1 long shot. (Remember Seabiscuit?) This story reveals a rare glimpse into the inner workings of the planet's two most exclusive clubs: international politics and horse racing. So. . . Fasten your seatbelt and get ready for a wild ride.

Politics and Ponies is an engaging and compelling biography and memoir of Howard Nolan, a man who was born to love his two passions at an early age and let them lead him on a lifelong journey filled with opportunities and amazing success.

The reader is invited to experience his fascinating lifestyle as he shares his globetrotting adventures in the politics of state governance and the world of Thoroughbred breeding and racing.

With stunning consistency, Howard won election after election serving as a New York state senator from 1974 through 1994. The record shows that he had more votes on a major party line than any other senator. One of his more memorable elections was in 1983 when he won a surprising victory in the Republican dominated town of Bethlehem, which hadn’t elected a local Democrat in it’s 188 year history.

Howard was always pushing for positive change and challenging the status quo, which is why his relationship with Albany mayor Erastus Corning, backed by the powerful Democratic machine, was often tumultuous. He was called Albany’s Man of La Mancha, because he dared to take on the unbeatable foe in Corning, which helped to bring Albany into the modern era.

So, get ready to be impressed by an American original who built a lasting legacy around Politics and Ponies.