Along for the Ride

Scenes Through a Moving Window 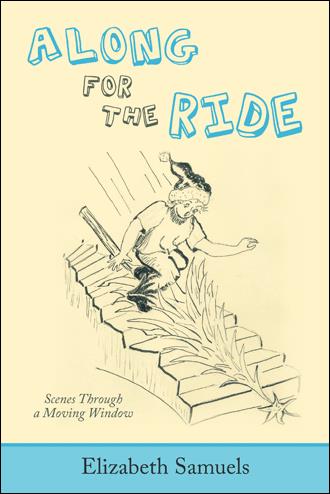 If there was ever a better place to be a kid, I don’t know where. Sister Skits and I would put on our white pinafores and sandals on warm summer evenings and take a basket of gardenias from our yard to sell to the tourists on the Boardwalk, and later spend our earnings on the wonderful Carousel or the Ferris wheel, or maybe the miniature train.

The Gang of Summer changed slightly from time to time, but the regular players were:

My very best bud Helen Degen, who lived a block back of us on 17th street, the main road into town at the time. There was a Texaco station next to her house so we could keep our bikes “aired up” at all times en route from one house to the other. More to follow on the Degens…

Jerry McClanan was my next door neighbor, and with Helen & I, the third member of the summer gang. She was tall, pretty, & really good at jumping rope.

…but to have a proper gang in town, same as a game of bridge, you need a Fourth. It takes four to be able to jump Double Dutch, two to turn, two to jump.

# Four was a “snowbird” who spent winters in Norfolk, (19 miles away, but light years in urbanization) but moved to a cottage a couple of doors down in summer. Her name was Brenda. I was with her when I was of the age to think that if I believed hard enough I could fly, & I launched myself off her shed roof. Guess what?! Shaken faith and a split lip, a step up from the chronically skinned knees I sported so often that my mother would paint big mercurochrome flowers on my knees to make them more attractive… City-wise Brenda and her family introduced me to the urban phenomenon of the drive-in, where the waitresses wore roller skates, and you could try exotic things, like cheeseburgers or the new French-fried onion rings.

That foursome was the framework of the Summer Gang, often added to or subtracted from as families came and went. It was a group rich in heritage… one Roman Catholic who attended parochial school; one Jewish youngster, whose family was still coming to grips with the news coming back from Europe; one Methodist & one Episcopalian. We rode bikes on the smooth cement of 16th street til we nearly wore ruts. We chased the iceman’s truck til he’d ice-pick off a sliver & hand it to us. We walked for miles with nothing but a foil bag of ice for sustenance, sometimes walking the circle where the Catholic church was located… often we’d meet the good Father P. P. Brennan, looking the picture of the sainted Irish clergyman. Though he was deaf as a post he invariably had a kind word and a dime for each of us (a change from my Uncle Jim… Father P. P. always crossed himself when he met Uncle Jim).

My family lived three blocks back from the ocean in summers in the lovely brick home my grandfather had built. My great-grandfather, a “master carpenter” who had been instrumental in building the first boardwalk at the Beach, was working on the original Princess Anne Hotel at the time our house was built, and put some of the “overage” in our house, including a lovely stained glass window at the stair landing. The landing was large enough for building blanket tents or for doll tea parties, and a nice rest between flights if you were bumping on your bottom on the waxed hardwood all the way downstairs.

On the second floor once a year my grandmother would pull all the mattresses off the beds and move them into the hall which ran the length of the house, and encourage us to bounce from one end to the other of this wonderful tumbling run. We may have been helping to get the old winter mustiness out, but I think it was more that she was the sort of grandmother who told people her flower beds were beautiful because of all the children’s feet running thru them; and she appreciated what a fine day’s fun it would be to bounce down that hall.

The rise-to-run on the beautiful hall staircase was such that as a preteen (only a preteen would do it) I liked to lie upside down on the stair rail when it was too hot to be outdoors & read my current Nancy Drew or Hardy Boys. There was always a cool breeze in the hall.

I linger on that hall because it was the site of major gang activity in the summer season.

It seemed an unlikely spot at first glance, but if you looked at it from a theatrical point of view, it had fine places to enter from the kitchen (stage right), or pop out of the under-stair closet; or you could sweep theatrically down the stairs and be between the two fancy wood columns (we elegantly labeled these “first base” and “second base”) at the living room entrance, where there was ample seating for a good sized audience. And what do you know… we took in summer boarders, and nearly always had a family or two vacationing in our upstairs winter bedrooms… and if they happened to noticed our pre-production flyers, or chanced to come downstairs into the hall at the right moment in early evening there was no way they could escape our latest production.

Our version of Summer Theater rose from combined auspicious circumstances:

1. We had the Hall, a natural theatre; and

a captive audience of boarders and family.

“Along for the Ride” is an anthology gleaned over the years from a collection of assorted kinfolk, friends and critters.

Part One of the book features Bipeds I Have Known and Loved, most of whom are part of the collection of Siblings, Cousins, Moms and Grandmas, Aunts, (that’s not Ants, it’s Aunts), Uncles and their significant (or perhaps not so significant ) others that comprise our talented, happily zany Family. It is drawn from the lore surrounding kith and kin that persists and is sometimes even (gasp) embroidered upon… especially when cousins are gathered in the family circle, “tellin’ tales and swappin’ lies”, well-lubricated by Sister Skits’ mint julep recipe.

Part the Second has to do with my years as young Wife and Mom, and my very rocky evolution into Housewife. Sprinkled through Parts One and Two are an assortment of Friends and Neighbors, some fascinating of themselves, some having a couple of endearingly loose screws that make them fine grist for this mill.

Part the Third is about Quadrupeds I Have Known and Loved, with an occasional nod to the Avian Set and even to a No-Ped I have become attached to, aka Big Jim, the Esther Williams of the herpetological set.

Hope you’ll join me and come Along for the Ride.

Elizabeth “Betsy” Samuels grew up in Virginia Beach when it was a mere hamlet in winter and a family resort in summer.

An avid reader even as a youngster, Betsy became acquainted early on with the gentle irreverence of James Thurber, Mark Twain, Erma Bombeck, and Betty MacDonald. It is her hope that her own writing brings the same “laugh at our foibles and love us anyway” sort of wit and wisdom that those wonderful authors have brought to the Buffet Table of Life.

Betsy now owns and operates Foxfire Christmas Tree Farm in Buckingham County, Virginia, where she continues collecting tales of the Off-the-Wall and the Downright Peculiar.