Gone to Rock and Ruin 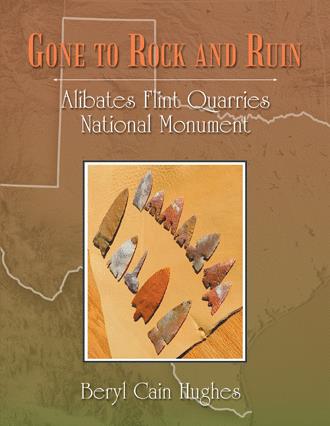 The people at the Alibates Flint Quarries developed a civilization that included dozens (some say hundreds) of villages in the Canadian Breaks and nearby. Floyd Studer, and others, pointed out that Alibates was the center, the point of origin. As you move farther out and away from the initial site, changes gradually appear.

They made some real advances in domestic engineering. They built the first masonry houses in Texas, heated and ventilated. They constructed slab-and-rubble foundations, which allowed the earth to shift slightly without causing the walls to crack, and provided drainage so water didn’t collect under the houses.

Their Borger Cordmarked pottery was a remarkable engineering feat, allowing for cooking with considerably less fuel. It was often decorated with punctate rims, but they never made smooth-sided, painted pots.

Although they continued to hunt, they established fields of corn, beans, and squash. They planted the dock they had brought across two continents, Asia and North America, from its origins in North Africa.

They established a wide trading network, and from their site on a high bluff, they controlled the commerce east and west along the river.

They had a seemingly inexhaustible supply of salt, a substance more valuable than gold, for which cities from Salzburg to Salt Lake City have been named. During the American Revolution, the British tried to intercept the Americans’ salt supplies to prevent them from being able to preserve their food. In the War of 1812, being short of money, the soldiers were paid with salt brine. People in our own time work day after day for salary.

Above all, they had the source of some of the most desirable flint in the Western Hemisphere. The questions arise:

WHY? We ask the same question about the Maya, but the answer is different. The Maya stopped building their huge buildings, but the people didn’t actually go anywhere. They are still there. The Alibates people really left the area. Not in one huge migration, but a family here, a clan there, a few at a time. In some cases, later groups probably inhabited some of their homes and workshops for a while. But over time, the whole complex was vacated.

Alibates Flint Quarries National Monument thirty-five miles northeast of Amarillo, Texas, celebrated its fiftieth anniversary as a federal entity in 2015, but until now, there has not been a single comprehensive book written about the site.

Beryl Cain Hughes, who has long been fascinated by the site, celebrates the history and natural beauty of what had been the one and only national monument in Texas for several decades in this collection of essays.

She answers questions such as the following:

Who were the people who lived near the quarries?

Why was the flint more valuable than gold?

What did these people eat, wear, and do?

What were their most significant accomplishments?

The author also celebrates the accomplishments of Floyd V. Studer, who was the first person to recognize the importance of a hill pockmarked with the pits that people dug in their search for good flint. He would spend his life dedicated to the site and its preservation.

Explore the history of some of the earliest people to venture into the Western hemisphere who dug flint, set up trade exchanges, established villages, and fought to survive with Gone to Rock and Ruin.

Beryl Cain Hughes has lived in the Texas Panhandle for more than thirty years and is well acquainted with Alibates Flint Quarries National Monument. She has degrees in history and anthropology, and a master of arts in library science. She has presented a number of papers on various aspects of the Flint Quarries, parts of which are included in this book, to professional societies.