The Waning of the West: An Inconvenient Truism

The Political Philosophy of a Conscientious Dissenter 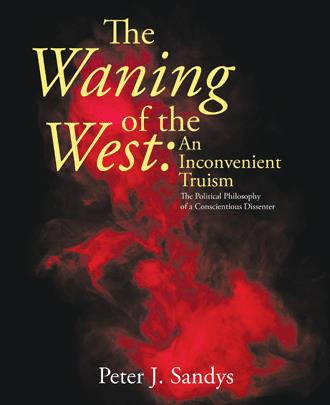 It has been a commonly held and eagerly disseminated opinion of the Western liberal media that the Left is somehow “good” and the Right is “bad.” This thread does not allow enough characters to expose the folly of this opinion.

But the sad legacy of two world wars, fascist and communist dictatorships, socialist revolutions, and antirevolutionary uprisings, followed by a left-liberal final assault, is that the Western bourgeoisie has massively weakened and the middle class has practically disintegrated.

The cultural vacuum was filled with mediocre, flighty, and preconceived ideas that pointed almost categorically to the Left in the 1960s. These partly antidemocratic and totalitarian ideologies led to political radicalism. It was not surprising when Oskar Lafontaine, at the time in the leadership of the West German Social Democratic Party (SDP), was against German reunification, arguably less because of the cost than out of sympathy for the former socialist system.

It cannot simply be that every leftist provocation is considered fair and just but any hint of mildly critical centrist ideas is branded “extremist.” No one with a modicum of historical consciousness can remain unmoved when cultural cities like Berlin, London, Paris, Athens, Stockholm, Hamburg, or Vienna are ignited, burned, and looted by black-clad thugs today. And this happens in the great cities of the European Union pretending to be the flag bearers of Western civilization.

While cars burn day and night during the demonstrations, there is massive violence against police officers, who are regarded as attempted murderers. Meanwhile, violent leftist criminals do not hesitate to attack police stations. This state of affairs is already close to the sort of civil war that is known only in Afghanistan or Iraq—and some still rant about the extreme danger to the democratic state coming from the right’s corner.

The supposedly right-wing and purportedly nationalistic and conservative perpetrators calling themselves skinheads are the work of a handful of bewildered, confused, sad, and disoriented creatures whose violent acts can be counted on the fingers of one hand in comparison with the massive acts of terrorism by the Left.

The leftists, however, with their consistent and successful marching through and taking over the Western state institutions since 1968, have changed the entire political and cultural landscape of the Western world. They made the United States a shadow of its previous self and reduced Europe from a postwar international success story to a sick and socialist “EUtopia.” Lo and behold, their helpers and supporters even warn that, by the old cry “Stop, thief!” the danger is coming from the right.

Whoever orchestrated this absurd theater did it at the expense of Western society, which has already lost to a large extent.

I worry about the breakdown of civil society in the West caused by individual rights not being paired with personal responsibility. The growing culture of entitlements has convinced Westerners that failure is not their fault but is rather the fault of the political-economic system. Once charity becomes an entitlement, the stigma of living on charity disappears. As a result, entitlement costs outpace government resources, resulting in enormous debts for future generations. In the meantime, the political leaders of the West kick the can down the road to win elections. Westerners have abandoned an ethical basis for society, believing that all problems are solvable by “good government.”

I could not decide for a long time if I should write down some events occurring in my lifetime, the underlying concepts behind them explained with a few of my thoughts. There were many reasons for this hesitation; the main one for going ahead was my ever-strengthening notion that after Europe lost its thousand-year hegemony over the world, the entirety of Western civilization began following in its path.

The “Age of the West” is ever so slowly but inexorably coming to close, and the new world will need new people to replace the enervated ones of the old. Even if a “United States of Europe” would ever come into being (although I see no danger of it ever happening), its role would still be similar to that of Spain’s within Europe: old brilliance, past power, and honorary glory, but without any real authority, strength, or influence.

It is like when a senile old man is revered for his age.

Any dissenter today who insists on upholding the prevailing law is a natural enemy in the eyes of the rulers. With all the energy at the rulers’ command, he will be denounced and defamed, charged and sued. Thoughts are not free in the West today but are dangerous. Words could become actions; therefore, any arguing is to be avoided. The characteristic signs of a totalitarian state are the persecution of certain tendencies, the harassment of certain attitudes, and the relentless assault on certain philosophies of life. The dehumanization of the opponents appears to be the highest concern; the rivals’ motives are represented as illegitimate. The intentions of the antagonist are outrageous, disgraceful, and infamous; the official causes are sacrosanct, perfect, and inviolable. The purpose does not sanctify the means, but the utilized means desecrate the purpose. As soon as any form of inimical act is contemplated, the affair immediately exposes itself as “fascist”—and thus automatically worth the fight. And then ideological ditches will rapidly become genuine graves.

Such is the Western world today.

The Waning of the West: An Inconvenient Truism offers a comprehensive, geopolitical and philosophical commentary on global politics following the Cold War. Author Peter J. Sandys presents a series of extensive analyses on social and political movements and what kinds of challenges face the West in the twenty-first century.

Sandys gives what he describes as a politically incorrect examination of political philosophy and the socialist transformation of the West. He’s critical of the present Western political arrangement and, after analyzing the different systems, offers recommendations as to the methods of solving the readily apparent impasse. Topics include:

The Waning of the West: An Inconvenient Truism delivers Sandys’ thoughts on the rejection of liberal democracy and the condemnation of the Western elite. It goes on to outline a new system termed “the essential option” that has the manners, values, and qualities associated with meritorious aristocracy and is intended to gently steer Western culture and politics onto a more sustainable course.

Peter J. Sandys earned a master’s degree in mechanical engineering from the Technical University of Budapest and completed the Army Reserve Officers’ Training Program. Sandys arrived in the United States in 1973, earned an MBA from Loyola Marymount University and a doctoral degree in international business from the University of California. He held various engineering and project management positions mostly in the US aerospace industry. Retired, Sandys has one daughter and lives in Germany.