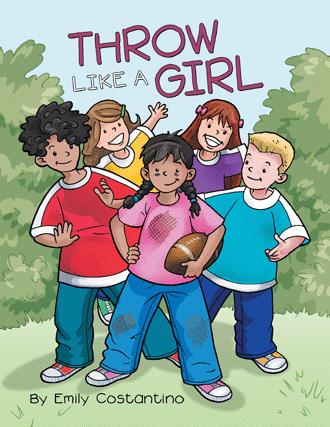 Recess came and Lauren was finally free of equations, she sprinted outside and as usual sat alone on the swings in the playground beside the football field. “There’s LAURENCE!!!” The girls would cackle as they walked by. Lauren hated the way they could turn her beautiful name into a boy’s name just to poke fun at her, she knew one day she could prove them wrong. She would show them that it didn’t matter what she wore, she would earn respect her own way and teach those girls better. In the meantime, she sat on the swings alone, twisting up the chains and spinning wildly as they released. She felt a rush watching the world spin by, the same rush she had felt earlier that day when she pictured herself throwing the winning touchdown. She longed to be on the field picking teams for flag football with the boys in her class but they would never take her seriously on the field.

Lauren Loretti is a young girl who loves football. On Sundays in the fall, she spends the afternoon with her dad and her brother, Dave, yelling at the games on television.

But school is a different story. There, she struggles to make friends and the other children tease her because she’s not like the other girls in her class. They don’t understand why she likes football so much and why she won’t wear dresses, and the boys won’t let her play flag football with them. Then one day at recess, a football lands at her feet, and Lauren gets the chance to show that gender does not define the interests and talents a person possesses. By staying true to herself and to what makes her happy, Lauren shows everyone the true power of throwing like a girl.

In this children’s story, a girl in third grade who loves football teaches her classmates that there are no limits to what girls can do.

Emily Costantino is an elementary school special education teacher. She has a bachelor’s degree in elementary education from Bucknell University and a master’s degree in intellectual disability/autism from Teachers College, Columbia University. She was a collegiate athlete and grew up playing sports and watching football with her family. She currently resides in New York, New York.