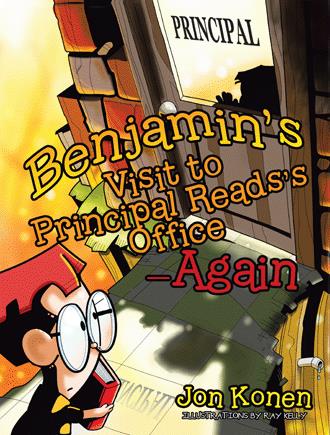 As soon as Mr. Reads said that, he turned around and starting working on his computer. He then pulled out a green list with student’s names on it. Benjamin wondered if all those students on the green list were in trouble.

Mr. Reads picked up the phone and dialed a phone number. Benjamin hoped it was not his parent’s number. While it was ringing, Benjamin asked, “Who are you calling?”

Before anyone could answer the call, Mr. Reads replied, “I’m making some positive phone calls.”

Benjamin thought…positive phone calls, why would Principal Reads call parents for positives? He thought he only called when kids were in trouble.

“Hello, is this Mr. Skimmer? This is Mr. Reads from Booking Elementary. How are you doing today? I am calling to give you a positive about Billy. Yes, yes, I get to call on positives, too! Mrs. McChapter, your son’s teacher, said he has been a model student. He gets along with everyone in the classroom, and he has made great growth on his last reading test. He went from scoring a 74% to scoring a 90%! I will pass on the praise back to Mrs. McChapter, too! Have a great afternoon.”

“Mr. Reads, I didn’t know you called parents to give them positive praise,” said Benjamin.

A trip to the principal’s office is something students do not necessarily look forward to. After all, it usually means someone did something wrong. But does it have to?

Author Jon Konen’s Benjamin’s Visit to Principal Reads’s Office—Again starts like all his other visits to the principal’s office. Benjamin misbehaves in class, and his teacher send him to the principal’s office for a “discussion.” But this time, it’s different. They just sit there. Benjamin hears the principal make phone calls to students’ parents about their children’s positive behaviors and achievements. And they exercise! Maybe these visits aren’t as scary as you might think.

Benjamin’s Visit to Principal Reads’s Office is an entertaining children’s story, but its lessons go beyond children. Parents and educators will learn about alternatives to punishment that can help students who have behavior issues. And they work. When something works, everyone benefits.

Jon Konen has taught in Alaska and Montana. Currently, he is an elementary principal in Great Falls, Montana. In 2011, he won the Presidential Award in Elementary Science Teaching. His current K–6 elementary school is the awardee of the 2012 National Blue Ribbon Award. The author has written two guides for educators published by Teacher.org: An Educator’s Guide to Combat Bullying & Bully Prevention and Teacher Evaluation: A Transition Guide to Exemplary Performance.

Ray Grew up in Great Falls, Montana and graduated from Montana State University with a B.A. in Commercial Design, Graphic emphasis.

For the past 27 years he has run Kelly’s Signs in Great Falls with his family. He illustrates, paints and maintains his original cartoon blog Spitewall.com in his spare time.