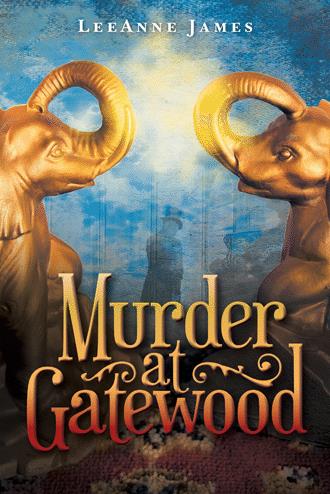 A week later, Herbert Woodford, Duke of Brazelton was dead. One of the maids found him after she knocked on the door of the study, and when no one answered, she went in. She saw his body lying next to the desk with a large, bloody gash on his head and a pool of blood on the carpet. Next to him on the floor was a brass bookend in the shape of an elephant, its trunk pointing upward in the traditional show of good luck.

She let out a bloodcurdling scream that brought everyone in the house scurrying toward the study. Flanders was the first one to reach her as she stood locked in place, making a whimpering

sound and staring at the grisly scene. When he saw the body and the blood, he grabbed the maid's shoulders, gently turning her away. He was careful to shut the door to the study behind him and led the maid into the hall where other members of the staff had started to gather.

All seemed to be talking at once.

Flanders pushed through the growing crowd to lead the frightened and shaking maid toward Rose, who had only just arrived.

In the late 1800s, the English countryside is rife with secret scandals, and nobody knows that better than Amelia. She had only recently made her debut into society when she met Sir Herbert Woodford, duke of Brazelton. She thought she'd found the love of her life, but the duke turns out to have a hidden, abusive, dark side.

Herbert is well-known throughout the land as being a mean, miserable man with a hair-trigger temper fueled by excessive alcohol consumption. When he is found murdered in his own home, hit over the head by a brass bookend, the list of suspects is endless. It turns out Amelia was not the only person Herbert was pushing around.

The duke is not mourned. Because he often lashed out at those around him, he'd managed to alienate almost everyone he knew, both friends and family alike. Still, a killer must be caught, but the investigation appears to have gone cold--until Senior Inspector Patrick Duffy realizes they overlooked one detail that could lead right to the murderer.

LeeAnne James lives in central New York with her husband, their son, and the family dog. By day, she works as an administrative clerk to the chief of police in a local police department. In her spare time, she is an avid reader but also enjoys cooking, baking, and spending time with her family. Murder at Gatewood is her first novel.