Florence through the eyes of Dante 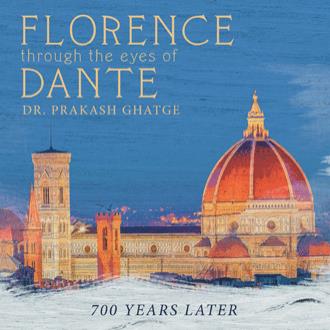 This book attempts to fill the void felt by the tourist visiting Florence and is overwhelmed by the many magnificent attractions. After taking in the major attractions, after David, the Duomo, the Baptistery, the returning visitor starts noting the influence of Dante on the city. You notice the plaques put all over the city - at the Ponte Vecchio, opposite the Duomo, in the floor across the Baptistery, on the walls of the Palazzo Signoria. You see the streets named after characters who lived in the age of Dante, the Guelphs and the Ghibellines. As you dig deeper - you are led into the masterpiece of poetry that Dante left us - the Divine Comedy, called the
Divine Commedia in Italian. This book in its most simplistic form is a travel guide to help the visitor locate these plaques. These are all passages from the Divine Commedia. They are all explained with the help of Henry Longfellow’s translation.
This book then goes into more detailed explanation of the characters that the passage is related to for example Beatrice and occasionally some that are unrelated like Ugolino.

Above all this is an attempt to draw you, the reader, into the magic of Dante, into Florence and the masterpiece that he left us - the Divine Commedia. . .
The plaques were put up 118 years ago. Since then an American scholar, Ida Riedesser, studying in Toronto made a list of these plaques in 1906. Subsequently in 1913, A Parrini wrote the book “With Dante in Florence”
- a source of great inspiration to this writer. Since Parrini wrote this book much water has flown down the Arno. Two world wars, devastating floods, earthquakes and the ravages of time have changed
the face of Florence. Hence the need for this book.

I hope the book will stimulate, titillate and pull you into Florence, Dante and the Divine Comedy for
a lot longer and far more fruitfully than two hours
spent watching the movie “The Inferno”!

If you want to jump in the ocean that is Dante and discover his presence in Florence, Italy, you’ve come to the right place.

Let Dr. Prakash Ghatge be your guide through the city’s cobbled streets as he locates the thirty-one plaques from The Divine Comedy, unearthing plenty of history and interesting facts along the way.

You’ll see where Dante lived and worked, the empty tomb in Santa Croce, and visit Ravenna where the poet lies. Read about the Inquisition, the Guelph and the Ghibellines, the vicious politics of the Middle Ages, Beatrice, Virgil, David and Cellini, the architecture then and now, and much more.

Whether you’ve already read Dante or are gearing up to do so, you’ll find that learning more about him will help you appreciate his work even more—especially his masterpieces.

Join the author as he reveals more about the man who gave us some of the most daring and controversial literary works of all time with Florence through the Eyes of Dante.

The author is a physician who retired after fifteen years as a surgeon and 35 years as an Emergency Room physician in Somerset Pennsylvania. Fascination for Italy, the Renaissance and Florence ( every tourist's dream ) inevitably led to Dante. Obsession with Dante and the Divine Comedy led to this book, initially a travel guide to locate the 31 plaques from the Divine Comedy plastered on the walls of Florence some 110 years back.
Dante and Florence are the jewels of Italy. The book is not a scholarly treatise but an exploration of the city of Florence and its connection to Dante and the Divine Comedy