Rome and America: The Great Republics 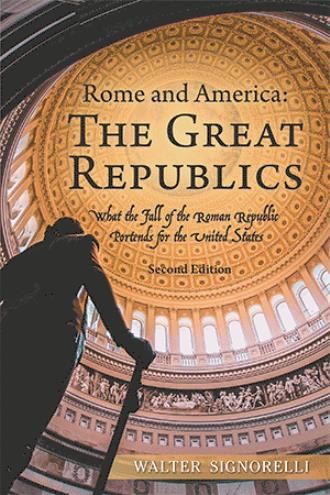 Though they took place two millennia apart, the assassination of Marcus Livius Drusus the Younger in 90 B.C. and the assassination of John Fitzgerald Kennedy in 1963 turned the course of their nations in remarkably similar ways. Both men were energetic, brilliant, appealing leaders; both inspired groundswells of positive and expansive feelings. Both were persuasive speakers who connected with their audiences. They followed a tradition of noblesse oblige, elites advocating on behalf of the common classes for the betterment of society. Both advocated civil rights and equality: Drusus for the Italians; Kennedy for American minorities. Both proposed major civil rights legislation, but both were killed before their legislation could be enacted.
Drusus was of noble of mixed plebeian and patrician heritage. His father, Marcus Livius Drusus the Elder, of plebeian ancestry, had won a political victory for the Senate against Gaius Gracchus in 122 B.C., and later became a censor. On his mother’s side, Drusus was impeccably patrician, and it would have been expected for him to identify with the conservative faction. However, at the Battle of Arausio against Germanic tribes, he saw his Italian allies fight bravely before they were annihilated because of poor generalship. From that experience, he developed a strong affinity for the Italian allies, and he determined to become an advocate on their behalf. Like the Gracchi, he chose to become a tribune of the plebs rather than a praetor or consul. His aim was to enact reforms, and as a tribune with a respected military record and the support of the common people, he had a better chance to succeed. He was in a unique position as the oligarchic class was more likely to accept his proposals because of his background, his extensive clientele, and his outstanding reputation as a paterfamilias. Most important, his record as a dependable conservative who stayed within the traditional legal processes rather than circumventing or violating the rules, distinguished him from the Gracchi. His objective was to persuade the oligarchy that his reforms, even at some immediate sacrifice, would be better for them and the nation in the long run. At the same time, he attempted to dissuade the Italians from outright rebellion, promising them that if they were patient, he would pass legislation for their full citizenship and equality.
Kennedy, an Irish-Catholic, could be compared to a new man of the Roman plebeian nobility. His father Joseph Kennedy was a self-made multi-millionaire who had married Rose Fitzgerald, a woman from a prominent Boston family, the daughter of the city’s mayor. The senior Kennedy served in the Franklin Roosevelt administration as the first chairman of the Securities and Exchange Commission. He had further political aspirations but was stymied. Thus, he passed his aspirations to his sons, Joseph, Jr. and John Fitzgerald. The oldest, Joseph, Jr., was expected to carry the political mantle, but was killed in the Second World War when his plane was shot down over the Atlantic. With Joseph’s death, the father redirected his efforts to steering John to the presidency. John also served in the war and was injured when his torpedo boat was rammed and sunk in the Pacific.
Although John Kennedy was the wealthy recipient of a ten million dollar trust fund, he became president as a Democrat and as an advocate for the lower and middle classes. His advocacy was not singularly attached to specific reforms but was rather a broad call to arms for freedom and equality, support for American labor, civil rights for African-Americans, freedom for people enclosed by the Iron Curtain of the Soviet Union, and democracy for people not yet under the Soviet dome. In his inaugural speech, he said that his generation had been given the responsibility to defend freedom everywhere. “I do not shrink from the responsibility. I welcome it.” He made a commitment that America would “pay any price, bear any burden, meet any hardship, support any friend, oppose any foe, to ensure the survival and success of liberty.” He inspired a generation with his famous call to arms, “Ask not what your country and do for you, but ask what you can do for your country.”
Drusus and Kennedy each emerged as perfect antidotes for the factional conflicts that plagued their times. Both had the capacity to resolve issues, and if they had lived, they assuredly would have implemented positive solutions. Without them, the conflicts exploded: in Rome, the Italian Social War; in America, the social upheaval and civil violence of the 1960s and 70s.

In innumerable ways, the United States of America is the political and social descendant of the Roman Republic, and the influences of Rome reverberate throughout our world. Yet while America reflects the heights of Roman structures, ideas, and principles, we also now face a host of problems similar to those that the Romans faced—immigration and citizenship, the consequences of slavery, the growing divide between classes, the conflict between conservatives and progressives, and the challenges of being a superpower.

In Rome and America: The Great Republics, author Walter Signorelli chronicles and compares these two greatest and enduring republics of history, explaining how they formed, grew, and prospered. He evaluates their strengths and weaknesses, the environments from which they emerged, and the values and practices they had in common. Signorelli also explores parallels between American and Roman military history, similarities between their constitutional governments, and the legacy of Roman law in America. Last, he questions whether our democratic-republican government will disintegrate as the Roman Republic disintegrated, whether it will grow stronger despite its similarities to the Roman experience, or whether it will transform itself into another form of government akin to Rome’s imperial dictatorship.

More than an historical narrative or a collection of biographies, Rome and America: The Great Republics examines the political, social, economic, and moral factors that affected both nations, considering the successes and mistakes of the Romans and their implications for American society today.

Walter Signorelli is a practicing attorney and an adjunct professor of law and police science at John Jay College of Criminal Justice in New York City. He was previously a member of the New York City Police Department for thirty-one years, and today he is a criminal defense attorney and a police practices and procedures expert. Signorelli graduated cum laude from St. John’s University School of Law before later graduating from the Columbia University Police Management Institute. He has written three books related to law and police science: The Crisis of Police Liability Lawsuits (2006), Criminal Law, Procedure, and Evidence (2011), and The Constable Has Blundered (2012), which received a recommended rating by the Choice Review for Academic Libraries.