Terror at the Cathedral 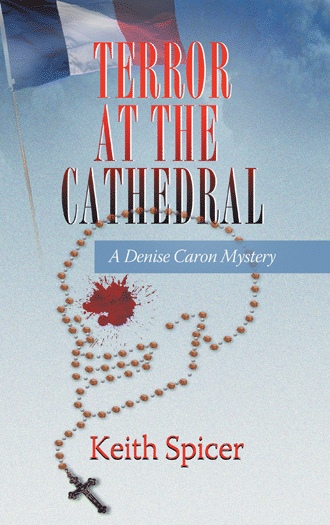 REIMS. Auguste-Delaune Football Stadium, 33 Chaussée Bocquaine:
Two young soccer fans in the bleachers, just ordinary guys you’d pass in the street or hoist a beer with at the billiards bar. Scruffy shaves, blue jeans, the Reims Stadium team’s red-and-white T-shirts and baseball caps. The rosy-faced blond guy with cap on backward might be in his early twenties, the coffee-skinned one maybe twenty-six.
They’re here to cheer the hometown team in the Reims-Nantes semi-final. And to plot how to blow up the eight-hundred-year-old western façade of the UNESCO-celebrated Reims Cathedral, revered as a monument to France’s ancient monarchy and Christian tradition. Twenty-nine kings received their crowns here and 2,303 statues of saints cover the church’s dramatic façade.
Behind and in front of the two fans sit four other guys. Faking a boisterous inattention, they’re undercover cops from the DGSI anti-terrorist police and their crime-busting cousins from the regional Police judiciaire (PJ). They’re seated to eavesdrop on and record everything the twin suspects are saying.
The cops have been tracking these “soccer fans” for several months. Both are objects of an “S” file identifying them as possible threats to state security. Between 12,000 and 20,000 residents of France own that distinction, including several thousand potential Islamic radicals. Some of these are deep-cover ideologues. Others are young online converts or brainwashed Islamic State returnees from Syria.
The S files show that the dark-haired fan was born in Algeria from poor but pious Muslim parents. After jail-terms for petty crime and non-lethal violence he became a Salafist radical bent on restoring seventh-century “desert” Islam.
The blond came from a devout Catholic family from nearby Troie. Radicalized online at eighteen by a French-speaking jihadist in northern Iraq, he trained and fought in Syria for a year, then returned to France last year. For DGSI this made him a serious suspect for lone-wolf mayhem in his homeland – stabbing, shooting or running over innocents by truck or car on his own initiative.
National and local media have long alerted the public to such profiles. Almost everyone half-expects attacks on major monuments, or on infrastructure such as train stations and airports.
As autumn leaves fall, Reims’s population of 187,000 (including maybe 35,000 Muslims) is already on edge about risks of Islamic violence. They only wonder when and where it will occur.
Then three weeks later…
Day One: Sacrilege

Sprawled naked beside her lover, Denise watches out the window as a thin orange horizon creeps up on the night. She yawns, then lounges in a long cat-stretch, taking forever. She smiles at her lover’s gradual awakening behind her. After their night of slow sweet passion she glows in a peace of animal satisfaction. She and visiting Marseille Opera conductor Mario are both at their peak, her young woman's need rising to lose itself in his gray-haired maleness. The ancient rituals need no words. They infuse everything.
She reaches a hand back to welcome Mario’s familiar solicitation. She gently holds him, then squeezes him.
Suddenly she freezes. She screams, her eardrums bursting. The whole world shakes in a deafening roar. She throws herself back on Mario and meets his instinctive hug. Struck dumb, the lovers turn to hold each other for a few seconds, trying to guess what’s happening.
“Stay here, I’ll protect you,” says Mario.
“No,” she snaps. “I have to see.”
“Me too.” Jumping up, the lovers stare wide-eyed out the window to the right of her inherited penthouse on the long Place Drouet-d’Erlon, the city’s central esplanade.
“Look at that pillar of black smoke darkening the sky in front of the steeple,” she gasps. “It’s the Cathedral!” The bastards have finally come!’’
“Mother of God! Yes, that’s what it looks like – sons of bitches!”
Mario puts his arms around her as they watch the smoke rise and spread.
“Che peccato! How awful,” blurts Mario. I know you have to go, my darling, but I’ll come with you.”
“No, you would just be in the way. Stay here. You can’t do anything. This is my job.”
After her spectacular breakthrough in the Hubert Repentigny champagne-cave murder case, Commissaire Denise Caron had been promoted from Chief of Investigations to Regional PJ Director. But she’s a hands-on director. She likes to run complex investigations herself, often on the ground with her teams.
“Let me help you get ready.”
“No, Mario. Just get out of my way. I know how to get away fast.”
Caron yanks her cell phone out of its recharger and dials the Commissariat’s duty officer, l’officier de quart:
“Hello, Laurent? Denise. It’s the Cathedral, plainly a terrorist attack. Listen to these orders. For starters: warn the hospitals and firemen and send a dozen ambulances to the parvis in front of the church, plus all available cops. Patch me into our Sécurité intérieure cousins across the courtyard. Make sure, for God’s sake, that this time they and we both share the same frequencies.
Heading for the door, Denise flings her POLICE JUDICIAIRE jacket over her shoulders, snatches up her keys, then waves to her alpiniste imaginaire:
“I’m out of here. Bye!”
Racing to the elevator, she takes it down to her unmarked cop car. Then, siren screaming, she roars off to take command at the Cathedral.
Within two minutes, ugly hee-haw klaxons swell to a ghastly chorus throughout center town.

Hurling seven workmen to their deaths, a massive bomb blows off the facade of the eight hundred-year-old Cathedral of Reims, France’s most revered monument to its national and Christian traditions. Public opinion blames radical Islamists, and hysterical mobs attack Muslims in streets, stores, and mosques.

Fear of civil war brings President Emmanuel Macron and even Pope Francis to the scene to plead for peace.

Commissaire Denise Caron, though losing a loved one in the blast and under pitiless media fire, leads a daring, sophisticated investigation. Its astonishing conclusion cuts to the core of France itself and offers lessons to a Europe facing ultranationalist tensions.

Caron’s lover, Mario, an opera conductor, comforts her all the way from despair to doubt and finally to stunning success.

“A bracing pursuit of terrorists with French police to a surprising conclusion right out of today’s headlines . . . enlivened with politics, eroticism, and champagne . . . a great read . . . best with a flute of Roederer Cristal” (Russell Mills, editor, publisher, and newspaper executive).

“This mysterious sequel zooms in on challenges inherent in intercommunal tensions in France and elsewhere. What a twist! What a thriller!” (Dr. Ratna Ray).

“A frightening picture of the chaotic violence that may engulf France—and other European countries—if narrow nationalisms continue to fight ‘the other’ in a fast-growing and changing world. Supercop Denise Caron tackles the problem with style” (Paddy Sherman, editor and publisher).

Journalist, editor, TV host, professor, businessman and public official, Keith Spicer is known in Canada as a passionate defender of national unity and minority rights. After an Honours B.A. in modern languages and literatures and a Ph.D. in political science from the University of Toronto, he taught at several Canadian and American universities, including Univ. of Toronto, Univ. of Ottawa, Dartmouth College and UCLA. His articles have appeared widely in the Canadian press, and in the New York Times and France’s Le Monde diplomatique. He became editor of the daily Ottawa Citizen and later its European columnist.
He was Canada’s first federal commissioner of official languages, chairman of the national broadcasting and telecom regulator (CRTC) and chairman of the Citizens’ Forum on Canada’s Future. He founded the Media and Peace Institute of the UN-linked University for Peace, Costa Rica.
Since 1996 he has lived in Paris, where he taught at the Sorbonne, served on government new-media committees, and worked as an associate of Ernst & Young. He is a member of the editorial board of Paris-based Ilissos, a centre-right political and economic newsletter.
Father of three adult children, grandfather of three girls, and maître d’hôtel of a cat named after French prime minister Pierre Mendès France, Spicer divides his time between Paris and Ottawa.