The Secular vs. the Sacred 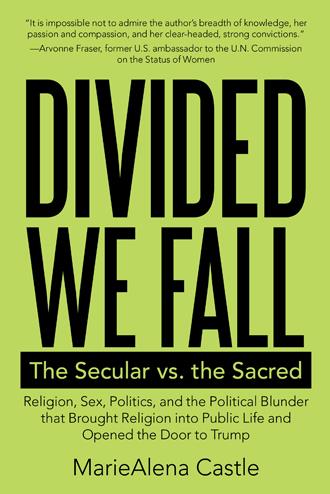 This is an updated edition of Culture Wars: The Threat to Your Family and Your Freedom (2013). That book described our social-political problems; this one shows how to resolve them. There have been a few negative comments. None have shown my arguments to be wrong, only that I am not polite, as if those who support inhumane laws have a point and I should respect it. This taboo against openly discussing the harm done in the name of religion is at the heart of our culture war.

To readers who don’t want that discussion, this book is not for you. You remind me of that part of Donald Trump’s base that doesn’t seem to care who gets hurt as long as the religious ideology or social fantasy that pushes some primal button in their psyche is validated. Apparently, I should kick the victim to the curb and coddle the aggressor.

Evil is as evil does and the evil in authoritarian religions is reflected in their doctrines, proclamations and especially their legislative agenda. The evil is expressed in their own arrogant words, and I quote them. It’s a mindless kind of evil generated by an ideology that itself is empty of rational content. I have seen its destructive effects and I call it out for what it is. There is a quotation for this circulating on the Internet, provenance unknown, that says: "We all place ourselves in danger to one extent or another when we stand up. But we place our children and grandchildren in even greater danger when we don’t.”

If some readers prefer not to stand up and that the religious right assaults on our freedom and civil liberties be politely ignored, excused, respected or, worse yet, welcomes, there are books that support that view. This isn’t one of them.

A lifelong political activist gives an insider’s view of how the political system works so opponents of President Donald Trump can use their knowledge to end the culture war and set a progressive agenda in Divided We Fall.

In the book – an updated edition of Culture Wars: The Threat to Your Family and Your Freedom – Marie Alena Castle openly challenges the harm done in the name of religion, which she says is at the heart of our culture war.

The book examines how religious extremists elected Trump and takes them to task for not caring who gets hurt as long as their religious ideology or social fantasy that pushes some primal button in their psyche is validated.

Unlike other books critical of the role religion plays in politics, this one reveals how to counter the danger based on the author’s long history of political activism. She has a been-there, done-that perspective and knows what works – and what doesn’t.

Whether you’re a believer, atheist, or fall somewhere else on the spiritual spectrum, you’ll want to learn how religion is changing the political landscape.

This is an engaging, compelling and important book. The public is so unaware how fragile our constitutional rights are. The book reminds me of our military men and women who return to the states as amputees and then speak strongly against intolerance because they understand that’s what the fight was all about.

The author’s grasp of theology and understanding of its irrelevance to how we live are impressive. This is rare in books about religion, making this a valuable contribution to discussions of the role of religion in public life.

We have to stop Marie

— Panic attack by “Roll over and play dead” advocate, reacting to

MarieAlena Castle earned a degree in journalism at age forty-five while working as a full-time factory assembly worker. A lifelong social/political activist and writer, she earned the Minnesota Democratic Party’s “Woman of Distinction” award in 2008. An award-winning writer and editor (now retired) for business, human relations, entertainment, political, and technical publications, she is the communications director for Atheists for Human Rights, a nonprofit charity in Minneapolis, Minnesota.