An Embers of Eden Novel

by Compiled by A.S. Williams 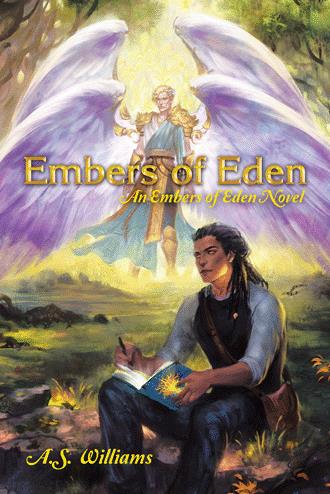 "Please. . . "
Kail gestured towards the sofa.
"Wait here, he will arrive shortly."
He left then, leaving Zai to examine the room more intently. His eyes had been drawn to the weapons and drew there now again. He moved towards the mantle, his eyes tracing the sword blades. It was true, death had its own beauty and Zai was not unaccustomed to it. In this instance he was particularly drawn to it.
His eyes settled on the blade at the center. For reasons unknown that odd sense of familiarity that had been riding his back for a day began to fill him. It was starting to creep him out a little bit. He couldn't look away. His eyes traced the scythe-like shape of the Middle Eastern scimitar all the way up to its gold, ruby and sapphire encrusted hilt. Somehow, he knew exactly how that blade would feel in his hand, knew the exact chords the metal would sing as he brought down an enemy.
Zai felt his pulse speed. He was missing something. He was oblivious to something important and he knew it. He'd had the same feeling this morning when he'd woken from that dream he still couldn't completely remember, but now wished with a vengeance he could. There was a small plaque beneath this weapon at the hilt, and his eyes flew to it. It read
-Shehemazai Ladain, Son of Zarek Ladain
-Loving father
-Dutiful Husband
-Treasured Son
-Beloved King of Ausaria Kish
Shehemazai, Zai, Shehemazai, Zai. His mind struggled to put two and two together and kept coming up against a solid concrete wall. Shit! What was he missing? What the fuck was he . . . .?
"I would not have pegged you as one who felt a kinship with war Zai Winston."
Just like that all the thoughts he'd nearly pieced together were gone. That voice curled over his senses, with a lick of darkness that sent goosebumps dancing down his spine, deep sensuous baritone/bass, resonant, like a long-lost memory, a long-lost dream. It momentarily stilled him. He was losing his mind!
Slowly Zai turned and got his first honest to god up front look at Solomay Au Vain. He was taller than Zai had imagined and seeing as he himself stood at a solid six-three that was saying something. He was almost a complete head taller, and broader than Zai was through the shoulders. A big fucking dude.
In the muted light of the fire he reminded Zai of an ancient Viking with his classic features, pale coloring, white gold hair, and storm cloud eyes. No, the video hadn't done him justice. In person Solomay was simply more. Power radiated even from his relaxed stance. Zai had never felt small in his entire life, not even when the chemo had taken him down to half his size.
This guy made him feel downright puny. God, now he wanted to paint him even more so than before. The way the firelight turned his pale hair to flame, and his eyes to wicked gems was making Zai's fingers itch to touch him, just to see if all the power he was throwing was real, and not just some artist’s fantasy he’d conjured. Finally, he managed to unglue his tongue from the roof of his mouth.
"I. . .uh, ahem. Yeah, I was just admiring the craftmanship."
And how lame did he sound just now? Pretty damn lame. Zai watched that sculpted mouth curve faintly in amusement, and noticed absently that the lower curve was fuller, more shapely, a born lover's mouth. Wait. . . .WTF! Where the hell had that thought come from?! He mentally smacked himself and shoved that thought away as Solomay stepped fully into the room and offered a hand, the other in the pocket of his black slacks. He wore all black Zai noted, and if his buddy Kail had been the picture of piety then this male was the antithesis, black slacks, black loafers, black crew-neck fisherman’s sweater, all impeccably tailored of course. Making Zai once again feel like the spotted horse.
"I am Solomay Au Vain. It is a pleasure to meet you. I'm a fan of your work. My associate Kail tells me you have need of me. If there is any way I can help I'd be glad to oblige."
Zai felt his body hesitate to take that hand, but pushed it back and smiled, accepting the friendly offer. An instant wave of heat raced up his arm, washed over him, and shook Zai to the core. The touch was laden with something so eerily familiar that it damn near toasted his bones and wiped that smile right off his face.
For a moment it had felt like someone had taken a swath of sleek velvet and rubbed it all along the inside of his skin. The feeling had been sensual, sexual, almost and set his creep-o-meter at an all-time high. He barely managed not to jerk back and break the connection. But in that same second Zai made the mistake of his life, he glanced up, gaze slamming directly into the man before him.
Oh Christ his eyes. . . . . No person he'd ever met had eyes like that. Indigo, deep and dark like thunderheads took up the majority of his iris, giving the look of dark stars. Amethyst in all its brilliance ringed his pupil and the outer edge of his iris, and sandwiched within the center of that indigo was silver that shimmered almost molten. The color shot from the center and ran along delicate veins to thread throughout his eyes like lightning. Storm cloud eyes.
Zai could still feel the strong warmth of Solomay's work calloused fingers within his own rough hands. The silence had gone on between them for at least a good minute, and it actually wasn't Zai who broke it. Solomay smiled faintly, dropped his gaze, breaking the spell and the handshake.
"Please sit. Tell me why you have come."

Zai Winston is a budding young artist whose life has been consumed by a terminal illness that seems to be determined to break him. Ironically it is only because of his illness that he is able to explore his passion as a successful painter. Resigned to his fate Zai’s world is violently upended as it is revealed that the truth of his existence may not be quite what it seems. Time and circumstance places him in the direct path of a past he’s never known . . . On a collision course with an entity his soul could never forget, and as the curtain rises and the truth is revealed the reality Zai has always known becomes a place of uncertainty; a place where the past is present, his life is a chess piece and the only thing that stands between him and oblivion is a love that will transcend the sands of time and a war that could shatter the world.

A.S. Williams is new to the publishing world but has been penning paranormal romance novels for almost two decades. An avid lover of all things anime and otherworldly Embers of Eden is the first book in her Embers of Eden series with many more to come. Her second novel Ties of Devotion is already in the works. She currently resides in South Carolina and can usually be found with her face glued to her computer screen working on her next project with the support of her loving husband and her dogs and cat Vader, Arya and Yuno.
Visit A.S Williams official authors page at
https://www.facebook.com/sirenofinkandpen