A Chronological and Poetic Look at: Addiction Depression Endurance Death 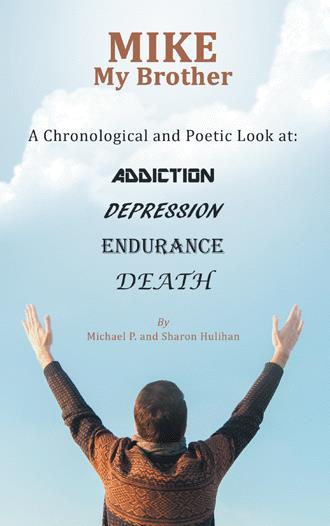 MIKE ... my brother takes the reader on a journey, a departure from a non-addicts reality to the reality of an addicts life, love and circumstances. The book is meant to hopefully help non-addicts understand the emotional and psychological pain an addict endures. I have never known addiction or depression; but reading Mike's poetic words from his teenage years up to his death left me frozen and in deep thought. I know his words could benefit so many individuals. Both addict and non-addict can benefit by taking a jaunt through the pages MIKE ... my brother. A chronological, poetic look at: ADDICTION, DEPRESSION, ENDURANCE & DEATH.

One man’s journey though his reality of life which is mirrored in millions of Americans. Both addict and non-addict will benefit from Mike’s inspiring words. His poetry was found by his sister ten years after his death. The words were moving, compelling and inspired his sister, Sharon, to put his collection of thoughts into a manuscript.

Many subjects Mike covered were life experiences: love lost and found, addiction, depression, relationships, mother and fatherhood, ageing and his own personal demons that led him to the extreme.

The book portrays the other side of an addict. The saying “don’t judge a book by its cover,” has one meaning … to go beyond what you see.

For the non-addict look past the addiction. Look into the eyes of an addict, which will reveal the pain in their soul. Give yourself an opportunity to get to know the person. Do not judge him/her because you have no idea the roads they’ve travelled.

For the addict, don’t sell yourself short. Believe in yourself! Give yourself permission to fulfill your dreams. You too can have an exciting future. If you don’t re-evaluate your future today, you may find yourself mimicking Mike.

Any journey begins and ends with you.

Sharon Hulihan graduated from UNLV with a degree in Communications. She began her career at an ABC news affiliate. Working independently, she wrote and produced award-winning TV commercials and high-end marketing films for local, national and international clients before moving to Hollywood to develop programing such as AMERICA WAKE UP The Untold Stories, working on movie trailers and other projects. She lives in Las Vegas and has recently focused on writing this book about her late brother, Michael P. Hulihan.