Doors Are Made for Walking Through Not Just Once . . . but Once and Again 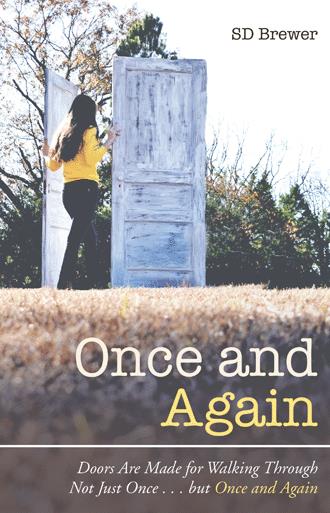 Problem. Here was another thing I didn’t do. I didn’t go to the dances. It seemed our relationship was forever doomed with roadblocks where we would need to figure out how his ideas and mine were going to merge. However, I did understand how heavily our differences could weigh on something so new and fragile… sooooo without much ado (exhale with me please…) I tossed it all to the wind. It seemed I was forever creating or giving our love another opportunity to fail.

In that moment I suggested he go ahead and go to the dance… without me.

He looked stunned for a minute and then questioning like maybe I was trying to make a joke or maybe it was some sort of test. I just sat. Loving him quietly. At peace with what must eventually come. Maybe it was a test. We both deserved the right to know where his affections lay. He had always said one of his passions was dancing sooooo if that was something that was integrated into his heart then we both needed to see how that would play out for these two opposites. It was a statement. A suggestion. He leaned back gauging my eyes, puzzled.

Then he said, “You’d trust me? You KNOW of course when I dance I will be dancing with ANOTHER girl? You are okay with that?”

And I said without anger and with all the unspoken love I felt but could not voice, “If I can’t trust you then you aren’t mine already. Soooo I guess we should be finding it out.” I didn’t say it sarcastically or mean-spirited. I wasn’t judging, hating or even afraid. It REALLY was more important to me that he be happy than I be his.

And that’s how that Friday night was planned out. Four weeks in and we were going to have another test. My friends were concerned for me. My family was quiet. I was strangely content.

Above all the chatter that continuously revolved around his character I knew that sooner would be better than later if he was going to break my heart. I was already too far in and though he hadn’t asked for it my heart was not beating to its own rhythm any more. Before I lost myself completely I needed to know where his heart lay and if I was the only one fighting to keep from whispering in the stillness of our times together, ‘I love you.’

We make plans. We dream dreams. We think we have understanding. We forget we are limited. We forget we are prone to sin. The simple truth is that we all have the potential to be slaves. Slaves of our past, our dreams, our flesh. Yet even in our wanderings all is not lost, for when the winds of adversity and our own wretchedness take us to our knees we can find power in surrender and repentance which will lead us straight back into His arms of grace. From there we can rise, restored and empowered to embrace life and whatever God allows to come through the doors of our heart.

It is the author’s hope that Once and Again will help you understand a concept that is so difficult to grasp in our day to day lives. For when you arrive with the world before you and God doesn’t allow you to step forward but instead asks you to stand still and bear ‘it’ while He works wonders... it is hard. Resisting Him only makes it harder.

Sometimes we learn that lesson early, but sadly some of us are slow learners...

SD Brewer was born in Kentucky and grew up in Arkansas. From her childhood, her life has always been a bit of a mess. She has found, however, that God has persistently followed behind her messes and used the clutter and chaos—and even the dirt—to create works of art. Throughout her life, SD has seen God’s hand anchoring her and leading her to take the next step on her lifelong journey of faith.