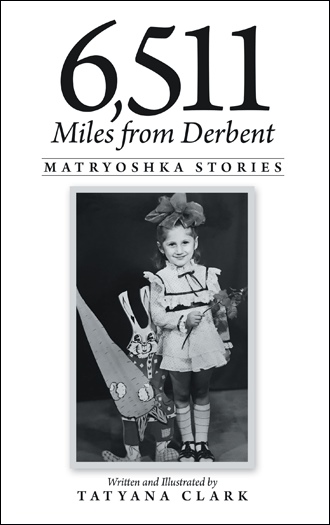 I love life because of its pleasant and not so pleasant surprises.

As I thought about the title and how it relates to the book, I am reminded of the distance I traveled from childhood to adulthood.  6,511 miles is the exact distance between Derbent, Russia where I was born and raised, and Logan, UT, USA where I ended up graduating from college. I sometimes think that life is similar to a Matryoshka doll, which is a set of wooden dolls of decreasing size that are placed one inside another.  These dolls are also known as Russian nesting dolls. I feel like this book is like a Matryoshka doll set, only the kind of set that would be of increasing size, at least this is how I see it. These dolls were my favorite toy growing up and I still love them.
I would play with the dolls by opening them one after another and placing them back in the stack for many hours. Each doll had a hand painted face that looked more, or less the same. I used to analyze each painted doll. As I opened them, I would always hope that an artist would purposely, or accidentally not make them perfect. I looked for their facial expressions or face features to be different. I am hoping you will feel the same while reading this book. These are true events that happened in my life that are very different from one another, but at the same time, they have the same purpose and meaning, the purpose to strive and to do great, regardless of the situation. Never give up hope and always believe in the best.
After opening my dolls and placing them back hundreds of times, I would leave them on a book shelf, and would not touch them for a couple of days. Every time I returned to my dolls, I would hold the doll set in my hand for some time, turning the doll to the left and to the right, looking in its eyes, as if I was looking to find some hidden message behind well painted facial expressions. I am hoping that my stories will bring you those hidden messages and clues on how to never give up regardless of your age, nationality, religion, race or life circumstance.
The doll sets that I had were painted with traditional Russian folk style. All dolls had a long and shapeless dress called a Sarafan, which was designed with all sorts of colors. These colors under a smooth lacquer finish gave the dolls such a glow.  In my mind they radiated with an element of precious and untouchable royal status. I often thought of the last baby doll as its heart, and no matter how many pieces I lost or misplaced throughout the years, I always made sure that I knew where the heart was and treasured it. I believe that we all need to find that heart within us and treasure it no matter what. These stories will forever be with me and I have decided that it is time to share them with you.
I wrote this book to show survival and perseverance, which ended up serving me as a natural instinct. These elements were present in each individual I grew up with, sometimes without regard and knowledge of the individuals themselves. As if they themselves, could not believe in the acts or motives which moved them forward to greatness and success.
This book is about a child that was not afraid to dream from early childhood, and who believed that dreams do come true!

Tanya was a very clever independent child. She was only 6 years of age when she attended a Russian Public School # 1115. Tanya lived in a town called Derbent, Russia with her Mom and Dad and her little brother. Derbent is a small city located on the edge of the Caspian Sea, north of Azerbaijani border. It is part the republic of Dagestan, which is located in the North Caucasus Mountains region of Russia. Derbent is the southernmost city in Russia. This town was a city full of mystery. It was considered by many archeologists to be the oldest city in Russia and in the World.
During the Soviet regime, Derbent’s age was accepted to be 5000 years. Recently, there has been a lot of controversy regarding the age of this city. Moscow, Russia claimed it to be 2000 years of age. Everyone in Derbent believed it to be 5000 years old and continued to celebrate its age. As a child Tanya loved Derbent because it had an ancient fortress called Naryn-Kala, which was located in the Caucus Mountains and which dominated this town. It was seen from every angle of this city. Tanya saw it every day walking up to her school. Naryn-Kala was only 4 kilometers away from where she lived. On rainy or foggy days, the fortress was covered with heavy clouds making it impossible to see the mountain and this mysterious structure.
In the evenings, Tanya studied music and arts at a music conservatory, which was located 2 blocks east of her parents’ apartment. Every morning she walked to school with her Mother, who was a history teacher at the same school. Her Mother’s classroom was on the second floor of the school where she taught 6th-10th grade. Children in the 1st-5th grade were taught on the main level of the school. Tanya was in the 1st grade. She used to love sprinting to her Mother’s classroom from time to time, making it a game and competing with herself on how fast she can get to her Mother’s classroom and back during a very short 5-minute recess.  Her Mother dropped Tanya’s baby brother, whose name was Andrey at day care every morning. She then dropped Tanya off at school.
They always dropped off Andrey at daycare first, and then continued their walk to school. Tanya could not stand Andrey’s daycare, because it was similar to a daycare where she herself used to attend. She was so relieved to finally be attending regular school! Every time they dropped off her brother, she felt bad for him. She knew that he did not like it either. She would look at her brother and say to herself, you only have a couple more years, as soon as you go to regular school you will be free! Even though her brother Andrey was enrolled in a completely different day care, every time Tanya walked in to her brother’s day care, she could smell something that reminded her of her daycare. It was a smell of over-boiled or burned milk. Local farmers would deliver fresh raw milk to all schools and daycares. Lunch ladies had to boil the milk in order to pasteurize it before serving it to the children so that they would not get salmonella or other dangerous diseases. This was served to Tanya for an afternoon snack after a nap, or a quiet hour, as they called it. On a good day she remembered having hot coco for a snack, but that smell was present no matter what was mixed in with that milk. Tanya was very happy about first grade. School did not have naps and drinking stinky hot milk was optional!
Every morning Tanya’s Mom Marina would instruct the kids to be on their best behavior at school. She told them she hears and knows everything that goes on during their school time.  She even said that she had her own spy that would tell her everything! Tanya was a very determined child, with a mind of her own, that always referred to herself as the future English interpreter. Her Mother called her The Wunderkind (A German Word, pronounced in Russian Vunderkeend).

The exact distance between Derbent, Russia, and Logan, Utah, is 6,511 miles.
That may be hard for a child to comprehend, but Tanya would always joke with her parents that if they made her mad, she was going to pick up and move to the United States of America. No one paid attention to her.
In fact, as Tanya grew older, everyone discouraged her from setting her sights on the U.S.A.—and they even claimed that it was not possible.
But the girl from a remote town by the Caspian Sea in the Caucus Mountains region of the Russian Federation would overcome everyone’s doubts and earn a full athletic scholarship to Utah State University.
In this memoir, she tells the dramatic story of how big ambitions led her from being a girl with limited opportunities in the U.S.S.R. and post-communist Russia to a successful woman with a loving family in the United States.
If you’re interested in the social history of the Soviet Union and Russia, enjoy reading memoirs of immigrants, or simply love inspirational stories, then you need to read 6,511 Miles from Derbent.

I would especially like to thank my friend, Jon P, for his help in Proof-Reading my story. Vasiliy Kuznetsov of Moscow, Russia for advising and interviewing me through the process. My husband and my children for their support and love.

Tatyana Clark grew up in Russia with limited opportunities, but she was never afraid to dream big. She worked hard to achieve her athletic and life goals and made the Armenian national track and field team at age sixteen. She competed in world championships, European championships, and youth Olympics, and ended up triple-jumping all the way to America. She lives in the United States of America with her husband and three children.