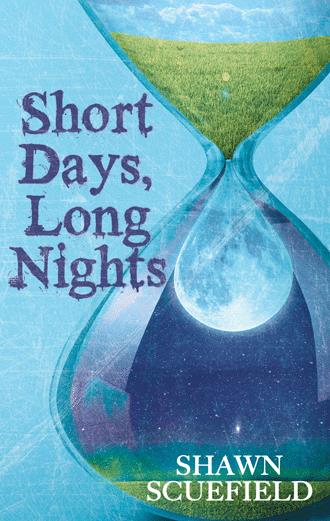 The wind picked up again, continuing to drive the rain down from the sky. Puddles were forming everywhere as the water fell faster than the ground could soak it up. Claps of thunder would temporarily drown out the screaming of the alarm, but once the rumbling subsided, the ear-piercing ringing again broke the silence of the night.
Cain took only a few moments to drive from Red’s place to his shop. He exited the vehicle and, for a moment, thought about turning off the ignition.
He quickly decided against that idea. Given all that had happened that night, he figured it best to leave the pickup idling instead of taking a chance on it not starting up again like in some cheap horror movie.
The headlights from the truck cut through the sheets of rain, allowing Cain to see that the glass entrance to the front of his shop, which had borne the name “Ross’s Auto Repair,” had been shattered. He cautiously stepped inside, glass crunching beneath each step and water dripping from him as if he’d just climbed out of a swimming pool. His clothes stuck to him like a second skin, and water ran from his hair down his face and into his eyes. He wiped feverishly at his face to clear his vision.
“Hello?” He pulled the pistol Red had given him out of his pocket and cocked the revolver’s hammer back. The illumination provided by the headlights allowed him to see that the rear door to the shop was open as well.
“Gone.”
He let out a sigh of relief and reached for the light switch. He flicked the switch. But before he could pull his hand away, his wrist was grabbed. In an instant, it reminded him of his childhood—his early childhood when he was afraid of the dark. Not really the dark, but what was in the dark, to be more accurate.
He had always imagined, as a child, especially on nights when his father left him home alone after his mom died, that if he got out of bed to turn on the lights, something—a monster, of course—would reach out and grab his hands just as he completed his mission, and he’d be able to see the vile beast that would be eating him alive that evening. Starting with the guts. That’s how all monsters ate children, after all. They started with the guts.
And in this moment, his monster had just reached out and grabbed him with a wet, cold, clammy hand that had that almost slime-like feel of a fish freshly pulled from a pond. The lights in the shop flickered on and off, then on again, illuminating the shop in pockets until they settled, and solid light fell upon the shop revealing the late-night visitor—the monster—to Ross’s Auto Repair.
It was Robert Marshall.
He was soaked from the rain, his milky-white pallor now looking an ashen gray, like remnants in an ashtray. Cain yanked away from the monster’s grasp. He could see large bits of skin—dead corpse skin—had sloughed off onto his sleeve. He shook his arm frantically.
Off! Off! Get the fuck off!
But then his mind snapped back into the moment. The rotting corpse was advancing on him.

What happens when the ordinary clashes with the extraordinary? Or when fear and wonder intersect with the eeriness of the inexplicable?

In The Resurrection Man: A stranger’s visit to a small town turns the lives of its residents upside down as dark days from the past are revisited and suddenly dead no longer really means dead…In Nameless, Faceless: After nightmares begin plaguing Eric Meecham, ruining his relationships and leaving him questioning his sanity, he turns to a beautiful psychiatrist to lead him to the truth behind the dreams, but is he ready to face it? In The Driver: The rocky marriage of Howard and Mora Mitchell has been hanging by a thread for years. Now, after a night of bad decisions it is barreling full speed towards a tragic ending.

In The Welcomers: Mia Shaw and David Payne embark upon what was to be an uneventful road trip, until they stop in an obscure town inhabited only by the elderly and an ancient evil that doesn’t want them to leave…In Love thy Neighbor, Or in the Very Least, Pretend: Conman Royal Gaines finds these are words to live by when he discovers the dark secret owned by his latest mark…In One Step Forwards, Two Steps Back: Down on his luck Jake McCabe grapples with the revelation that the choices he’s made to better his own future, seem to have doomed the future of all mankind.

Short Days, Long Nights takes you on a journey through the dark and unknown.

Shawn Scuefield is an avid reader and writer. He lives with his family in Chicago, Illinois, where he is currently working on his next series, The Retired Detectives Club.