My Life through My Dresses 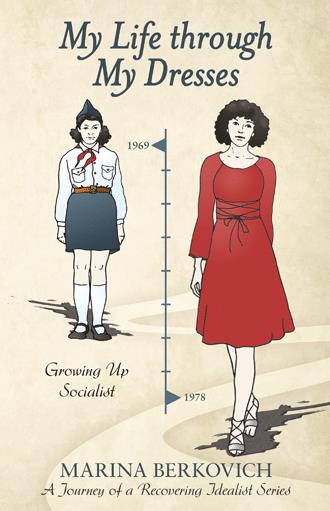 The departing-forever crowd was everywhere inside the Chop train station on October 31, 1979. It was a challenge to find a spot to set down a suitcase or sit. Spread out through the five or six halls that were open to the public at this border station were the departing Jewish families. Small, large, very Jewish, and really Gentile looking. Old, middle-aged, young, childless, and with children of all ages. Finely, neatly, so-so, sloppily, expensively, and poorly dressed. The ailing, the pregnant, the toothless, the gold-toothed. Handsome, ugly, average looking. Fat, skinny, smart, dumb. Well behaved, rude, polite, obnoxious, angry, neurotic, calm. Russian, Ukrainian, and Moldovan. Jews of all kinds were here to cut out of the Soviet Union after months or years of deliberations, preparations, refusals, and humiliation. Here, at the station in Chop, which as I later discovered means “cut” in English, we were gathered together, I thought, like the Jews of Babiy Yar were in September 1941, as if to the slaughter. Chop, chop, chop!
Everyone was dressed in many layers of everything. I had on my revolutionary turtleneck and Monsieur jeans, with the Riga twin dress over them, and over that a sweater of many colors that I knitted myself. Over it all was my Polish coat, the same one that had shielded me against sleet, rain, and snow for the past three years. My brown rabbit-fur hat was on my head, and on my neck, twisted and tucked into my sweater, was my white Orenburg down shawl, like those the heroic Russian women wore during the Great Patriotic War and like those of the Decembrist exiles. I do not remember what I wore on my feet. I just know it was something equally as uncomfortable as all the combined layers of my clothing. I felt like stuffed cabbage, barely able to turn. I was suffocating, itching from the down and wool—completely miserable. But not as they were, I kept reminding myself, not as when they stood naked, waiting to die. I am so much luckier. It will soon end and end well for me. That quickly became my lifeline mantra at Chop.
The station buzzed in a not-too-happy beehive sort of way. It was as if carnage was actually expected. The sound of it was not yet distinct, but every time a large, dirty, industrial gray door swung open, all heads turned to the boarded-off part of the station, the carnage room. All voices quieted, and a look of fear crossed the adults’ faces. This repeated hundreds of times each hour. The fear was also apparent in the children’s eyes. It was acute and contagious. It was most probably in mine. I was a scared child who was pretending to be a brave adult.
It was soon the departure-control time for the people of the October 31 morning train. Men in boots from Hungarian, Czechoslovakian, and Soviet customs; border servicemen and servicewomen; medics; and border policemen were everywhere. Cleaning crews with stinky brooms washed the floors with grimy rags out of filthy buckets of dirty floor water. Pretending as if they were doing so by chance, they would deliberately settle their rags among the sandwiches and fried chicken that waiting Jews spread over their suitcases. Sneaking around these makeshift tables and large families, the cleaners were probably spying on the departing. Nobody cared about anyone in Chop. As always in the Soviet culture, a person’s problems were that person’s problems. Consideration, kindness, comfort, and care are never the attitudes of the oppressed. We were only taught that, never shown that.
To me this grotesque scene was straight out of Goya’s Los Caprichos etchings. In them he condemned the society in which he lived. I was silently condemning mine. I engraved onto my brain’s visual canvas my farewell to the USSR. I wish I could scroll you down the memory in my brain dated October 31, 1979. Maybe technology will allow us someday in the not-too-distant future to exchange our visual brain records as easily as we can now AirDrop between our iPhones or swap pictures through Facebook with relatives all over the world.
I recall this day as a day of anxiety and fear, and at the same time it was a day of anticipation. I was on the brink of freedom. It was real. It peeked through the filthy doors and made the sweaty-itchy discomfort somehow tolerable. Dust, dirt, despair, and darkness were on our side; light, hope, and promise were on the other. The only thing that separated us from freedom was a few people into whose hands our destiny had entrusted our final moments in the USSR.

In My Life through My Dresses, the first book in A Journey of a Recovering Idealist series, Marina Berkovich describes her life under the yoke of Soviet Union, and shares what she learned about the totalitarian government that raised humans as dysfunctional beings. Berkovich weaves her miniature epics of personal survival into a wise and compassionate story of historical value, adding a new dimension to the understanding of Russian history. The story will soon continue with In the Land of the Freed, detailing Marina’s many adventures in her early days in USA, and My Life through Their Dresses, a heartbreaking account of tribulations Marina’s family members underwent during revolutions, wars, Perestroika and immigration.

Marina Berkovich was born in Kiev, USSR and spent the first part of her life there. In 1979, she and her mother became stateless refugees on the road to the United States. This is her first book in prose. Her book of Russian poetry, “One-Way Correspondence,” was published in 2001.