The Time Travels of Annie Sesstry

Book One: Sly as a Fox 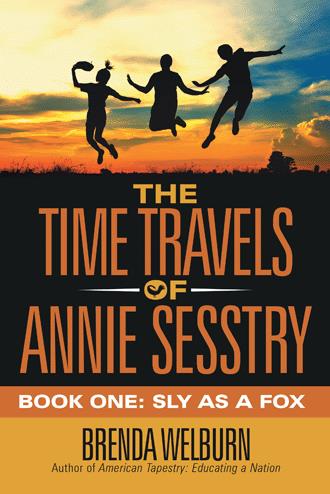 Squeezing their eyes shut the trio of youngsters yelled “Sankofa!”

A gust of wind yanked them off their feet as they passed through an invisible vortex, leaving them on the periphery of a bustling nineteenth-century town. Throngs of people – Black, white, young and old - crowded together or moved along the red dusty street attending to their daily routines. To their amazement, Annie, Josh and Emma discovered their clothing transformed to the times of their surroundings. Their backpacks had changed and were now simple knapsacks. Annie thought about the missing water bottles and wondered if there was a connection between the bottles’ disappearance and the travel through time. She wondered if whatever bewitchment guiding their travels prevented things so out of place as plastic bottles and cell phones from going back in time.

Annie was unsure how much time had passed. They had not eaten anything since breakfast and time had lost its meaning.

Emma was the first to speak. “I’m hungry”.

Josh who was as hungry as Emma sulked.

“Even if we had money, I don’t think we could just walk up there with a twenty-first century Abe Lincoln five-dollar bill and buy lunch. Remember what Mamie said”.

Mamie’s warning rang in their ears as they scanned clusters of men and women divided by race. Be careful who y’all talk to. Try not to talk to any white folks at all and don’t look em in the eye if you must speak to them. Drag out your words and try not to sound so proper.

“I wonder what the connection is between Sankofa and our ancestors”. Annie said. “It’s no accident that the first portal took us to Mamie. This is about our ancestors. We locate another ancestor, ask the right questions to conjure the Sankofa magic and enter a portal that takes us home. I may sound like Gramby, but we’re here for the teachable moment. We learned somethings from Mamie. One of us, or all of us must learn a lesson from an ancestor here”.

“It was easier in 1912 where Mamie was, it was only her. There’s more than just one person here and Mamie told us to be careful who we talk to” said Josh.

“True,” replied Annie, “but I refuse to accept we are at this specific location at this specific time by accident. I trust that extensive brain of yours to help me figure this out. What were you and Mamie talking about when you observed the portal”?

“We were talking about my name. Mamie said it was important that I learn about the original Joshua in our family. Of course, I didn’t know then we were talking about her father. She said I should tell my children about him so they could relay the story to their children. Future generations should remember and appreciate where they, or we came from. She repeated a version of the Sankofa legend similar to what Uncle John taught us. ‘You have to look back to understand where you came from before you can move forward’. I said, that it was the same as the story of the Sankofa, although there are lots of versions, the point is pretty much the same. As soon as I mentioned the word Sankofa, I saw the light”.

“I think our purpose here is to learn about the family members who came before us, so we can honor our forefathers and mothers, our history and our culture,” stated Annie. “That meshes with the idea of finding another ancestor. Mom made us help her with all that census research for her books, so we know a bunch of names. Our predicament is how to identify a random ancestor among all these people”.

They gazed around considering their situation. They looked in the direction of the court house where a cluster of Black men were in serious conversation. One man appeared to be leading the discussion as the others listened intently. He was well dressed and commanded the attention and respect of the other men surrounding him.

“Maybe we could ask him,” offered Emma, pointing to the man.

“That there is Jefferson Franklin Long” interjected a voice from behind them. “He’s a tailor here in Crawford County, but he’s studying politics. Folks say he will be the first colored man from Georgia to go to the US Congress”.

The three turned to see a woman smiling at them. She balanced a large basket on top of the turban that adorned her head. Emma could smell the aroma of food seeping from the linen-covered hamper. She closed her eyes taking in the wonderful scents. Unconsciously she groaned at the sweet smells as her stomach growled. Annie jabbed at her with her elbow.

“Afternoon,” she said. “I’m Mary MacElmurry and who might you be”?

“I’m Annie Sesstry and this is my sister Emma and my cousin Josh”.

“How do you do”? said Emma and Josh in unison.

“Are you headed anywhere in particular”?

They didn’t know how to respond so the three of them remained silent.

“Well, its fine to meet you Annie Sesstry and you too Josh and Emma. You young’uns look like you been traveling awhile. Me and my family was fixin to have lunch over in the grove. There’s a plenty food and y’all welcome to join us if you like”.

Cutting her eyes at Josh for his boldness, Annie bobbed her head. “Thank you, that’s very kind of you, lunch would be great”.

Mary scanned the group of men and catching the eye of one and gave a short wave. He said something to the others and walked toward Mary and the trio of visitors. “That be my husband, Laverne ‘Fox’ MacElmurry” Mary pronounced with pride.

Astonishingly Annie counted on her fingers as she thought, and if that’s the Laverne MacElmurry I think he is, that be our great-great-great-great grandfather

Annie Sesstry's family roots trace back to Laverne Fox MacElmurry, a man born in slavery in 1829, and freed after the Civil War. Annie, his twenty-first descendant, is a smart and sassy thirteen-year-old from an upper-middle-class family, anxious to spread her wings.

Annie's mother, a writer, and her father, a history professor and curator at the Smithsonian Institution spend weekends with their children exploring historical and cultural points of interest. Though Annie hates everything about bygone times, her parents insist understanding history is essential to the children understanding who they are and from where they came. One summer day, Annie, her sister Emma, and her cousin Joshua slip through a portal and travel back in time to post-Civil War Georgia. They meet Fox and discover a secret about family time travelers through the generations, learning that history isn't so dull after all.

"Using time travel as a crafty device, Brenda Welburn gifts the reader with a mélange of family history, creative artistry and historical facts that educates and entertains. The eventful journey from contemporary metropolitan D.C. back to post civil-war Georgia where sassy teenage protagonist Annie encounters her ancestral family is riddled with intrigue. While exposing with accuracy some of the terror and darkest moments of the era, the poignant journey illuminates the values, determination, and courage of a people forging a new life of freedom. The window on conditions experienced by our collective ancestors not only underscores how far we have come but reminds as well that the struggle continues".

Brenda Welburn spent thirty years in the field of education, specializing in cultural diversity and its impact on student learning. A graduate of Howard University and former Executive Director of the National Association of State Boards of Education, Welburn is one of the country’s foremost experts on state education policy. She is author of American Tapestry: Educating a Nation.