The Treasure of Bayou Reeve 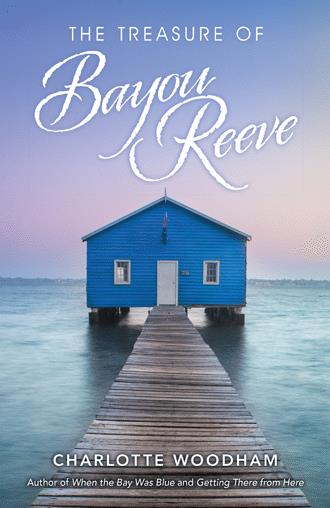 “I’m hurrying as fast as I can.” Eight-year-old Trevor Junior was almost running as it was. “My legs are shorter than yours, Reeve.”

The 12-year-old stopped and turned to grin. “I forget about that sometimes,” she said. “But you know the good thing?”

“They won’t always be. Some day your legs will be even longer’n mine.”

“Come on. Let’s cut through the woods. It’ll be faster.” Reeve motioned toward a patch of scrub oaks and Black Jacks. “Thing is, you probably won’t be still trying to keep up with me by then.”

Suddenly Reeve stopped so quickly that Trey’s chin jammed into one of her shoulder blades. “Oh, my Gosh! Don’t look, Trey.” All the while she was pointing straight ahead.

“Where? What is it?” He jumped in front and craned his neck, expecting a snake or a dead animal.

“What is it, Reeve?” Trey could see it now—what appeared to be a pile of clothes or rubbish lying in some low brush up ahead.

“It’s a body, that’s what it is. Now don’t come any closer.” Reeve spoke over her shoulder as she charged ahead of him.

Trey stopped, all the time fighting an urge to turn and run. He watched as Reeve peered down at the corpse. Then, while he stared incredulously, she reached toward the body and touched it.

“My Gosh,” she said as she stood looking at something she had picked up. Then she turned and darted back to Trey. “Let’s get the heck out of here.”

But when Trey turned to run, she held him back. “Somebody’s coming,” she whispered, as she pulled Trey into a clump of bushes.

From their hiding place, they watched as a man, previously hidden by underbrush, sat up and looked around. After a few seconds, he got up, stumbled and almost fell back to the ground. At that point, Trey realized the man was Russell Copeland, Reeve’s father. They watched silently as Russ staggered past them to the road, apparently oblivious of the corpse.

“Come on,” Reeve whispered. “He’s too drunk to notice.”

Trey scurried behind Reeve through the brush to the road and down the dock to the boathouse.

“Know who it was?” she asked a few minutes later as they crouched on the floor. “Melvin Purdy, that’s who,” she continued, not waiting for an answer. Her eyes widened. “Laying on his back with a knife as big as this,” she held her hands a good two feet a part. “Sticking right out of his innards.”

Reeve shook her head. “No way. Daddy was too drunk. Probably passed out through the whole thing. Been laying there for hours. Didn’t you see the dirt and leaves all over him?”

Trey had been too scared to notice, but he nodded anyway.

“Somebody else did ole Melvin in. That’s for sure.”

“Had to. To get his.” Reeve reached for the canvass bag she had hidden in her shirt. She loosened the string and struggled with the weight as she turned it upside down. Trey caught his breath as gold coins and jewelry spilled into her lap.

“Are we gonna give it back?”

“Heck, no. Who would we give it to? Melvin’s dead, isn’t he?” Reeve tilted her head and thought for a moment. “Still, we can’t let anybody know we found it, either. Else they’ll take it back. Think we killed Melvin, too—or my daddy did. What we have to do is hide it till all this dies down. Then we’ll come back and get it.”

“Well, I should take more cause I found it and nearly broke my back running with the weight of it. Besides that, my family needs it worse than yours.” She fingered a palm-sized broach with red and yellowish stones that glittered so that Trey squinted to look at it.

“Where are we going to hide it?”

“How will I know where it is?”

“Look, Trey. It’s like this. They might come asking you about it. If you know where the treasure is, you’d have to lie and I don’t want you to have to do that. I don’t mind lying myself—I've done it enough already, but you shouldn’t have to. Now you go on home and act like nothing happened. I’ll find a good hiding place and we’ll come back when it’s safe and split it up.”

“Sure, it’s OK. But remember now, don’t say a word about this to anybody. When you hear Melvin’s been murdered, act like it’s a big surprise. Don’t tell anybody we was even down here. Say we came home the long way—no, don’t even tell them we was together. Say you didn’t see me all morning.”

“Yeah. But we don’t have any choice about that one. So don’t forget, OK?”

“Good boy. Now scoot home, hear? I’ll find a hiding place and maybe we can talk tomorrow. I have to hurry home, too. Mother goes to work at 10 and she doesn't even know I'm gone.”

Childhood is supposed to be a time of carefree days and fun memories. But for some children, it also contains mystery, which they can spend a lifetime trying to solve.

Author Charlotte Woodham’s The Treasure of Bayou Reeve is the story of childhood friends Trey and Reeve. While playing in the woods around their childhood homes, eight-year-old Trey and twelve-year-old friend Reeve discover a murder and robbery—and a bag of jewels, which Reeve hides. More than thirty years later, Trey returns home to care for his aging father, with hopes of mending their damaged relationship. He brings with him a failed marriage, diminished self-worth, and bittersweet memories of a lonely childhood and lost friendship. His one fragile hope is that he might find the treasure. Meanwhile, as his relationship with his father worsens rather than improves, a mysterious dark-haired beauty arrives, and both men begin to change.

Sometimes what seems to be a treasure when we are children does not quite seem so important as adults. Follow the twist and turns of The Treasure of Bayou Reeve and discover Trey’s real treasure.

Charlotte Woodham grew up in the scenic bayou country of Florida’s panhandle. She has written award-winning short stories and worked as a staff writer at The Florida Times-Union newspaper in Jacksonville. The Treasure of Bayou Reeve is her second novel. Her first, When the Bay Was Blue was published in 2002. Her memoir, Getting There from Here, was published in 2011. Retired, she lives in Lake Asbury, Florida.