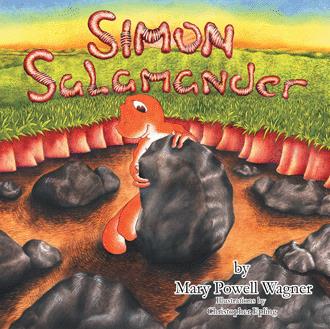 Take a journey with 'Simon Salamander' a story that comes to life with every beautifully illustrated page.

Simon the salamander has a problem. He’s often mistaken for a lizard; he’s most definitely an amphibian and becomes upset when others call him a lizard. With that said, Simon feels it’s better to live by himself and avoid all the other animals, especially lizards. One day while hunting for worms, Simon discovers a lost and lonely chameleon who needs his help.

A picture book for children, Simon Salamander tells a timeless story about acceptance and friendship. Through the compassion for another, Simon faces some of his biggest struggles—most importantly, overcoming being considered a lizard. It’s a big step for the little salamander as he decides to place another’s well-being above his own.

Mary Powell Wagner is originally from Elkhorn City, KY and grew up in a house about a hundred feet from the Big Sandy River. A self described “river rat,” she enjoyed more than anything exploring the mountainsides, creeks, and riverbanks surrounding her home, which was the inspiration for her first book, Simon Salamander. As a child, Mary was fascinated with the world of the river critters and brings them to life delightfully in her story of unlikely friendship and adventure. Mary lives in Lexington, Kentucky.

Christopher Epling is a graduate of both the University of Kentucky and the University of Pikeville. In 2008, he returned to civilian life after serving four years with the 101st Airborne Division (Fort Campbell, KY). His published comic strips and cartoons have been syndicated in various newspapers across Kentucky, Ohio and West Virginia. Epling’s published works (14 in total) has received various awards, including the ‘Reader’s Favorite Children’s Book of the Year Award for 4th to 6th Grade’ (for “Erby’s Turn to Rake”). He received the ‘Kentucky Press Association Mark of Excellence Award for Collegiate Editorial Cartooning for his work in the University of Kentucky newspaper titled the ‘Kentucky Kernel’ and for his work in ‘North of Center’ (Lexington, Ky). Epling was named ‘Artist to Watch’ by comicrelated.com. He received the Young Professionals of East Kentucky’s “Young Professional of the Year”, and Lee & Eleanor Rose Ambassador Award from “Forward in the Fifth”. He hosts and assists with producing “The Art Workshop with Christopher Epling”: a local access television show airing on ‘PikeTV’ (Pikeville, KY). Currently, Epling resides at Regina-KY where he serves as Art Director for the St. Francis School of Assisi in Pikeville KY, the Challenger Learning Center of Hazard-KY, the Kentucky Valley Educational Co-Op of Hazard, KY, and the agricultural based company ‘AppHarvest’ in Pikeville, KY. Find out more about Christopher Epling by visiting his website at www.ChristopherEpling.com.