Visions of a Swimmer 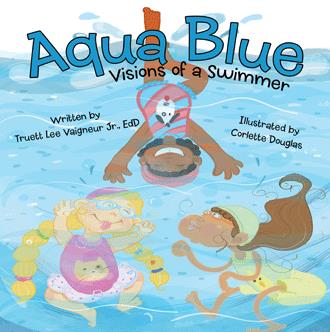 It was a year after I entered the family, Visions was feeling a lot of pain in her back so her parents took her to the medical center. Later that night, Visions and her parents came into the bedroom. Visions hugged me very tight as we sat on the bed with her parents looking at us. The doctor told her and her parents she needed an operation on her back so she would have to go into the hospital for a few weeks. And she was very scared! She was scared because she had also been told that when she came home she probably would not be able to walk or swim again.

But she did continue to swim after the operation and the story of Visions ends very happily. So let's start from the beginning.

Vivian is a young girl whom everyone calls Visions, because when she swims, she is a vision, creating beautiful splashes of blue water. She learns to swim at age two and quickly becomes a star, winning contests and joining the swim team. Then, when she turns six, she receives a cat as a birthday present. She names it Aqua Blue, and the cat becomes her friend for life and the one who sees her story unfold.

A year later, when she is seven, Visions begins feeling a lot of pain in her back. Her parents take her to the doctor, who tells them that she must have an operation. She goes to the hospital for a few weeks, and when she returns, she is in a wheelchair. Visions is sad at first, but she is determined to swim again. She won’t let anything stop her! Can her hard work and determination help her to swim again?

Narrated by the family cat, this children’s story tells the tale of a young swimmer who must learn to swim again after an operation leaves her partially paralyzed.

Truett Lee Vaigneur Jr., EdD, is the host of the Manhattan television show Disabilities Redefined with Dr. Vaigneur. He is a LEADS (Linking Employment Academics and Disability Services) Specialist and an adjunct professor at York College of The City University of New York. He lives in New York City.

Corlette Douglas is a graduate of the Fashion Institute of Technology, where she majored in illustration. Her preferred medium is watercolor, and she loves bringing characters and animals to life. This the first children’s book for which she has served as principal artist. Visit her online at www.corcorart.squarespace.com.