The Keeper of Fire

Book One of the Dolphin Code Trilogy 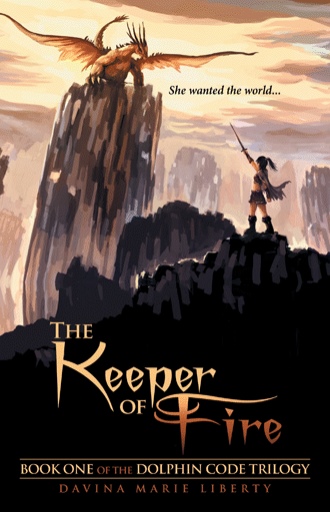 “…Your world is divided, Deiji. It must be reunited, for man and mystic must face each other at last and join together to fight. But not all can make the sacrifice to join the world together. Not all can make such amends. That is why you have been chosen to mediate through all Elements. Relant has instituted a fever, a spell cast on the Four Elements of Nigh. I believe you are familiar with it.” He eyed her heavily.

“Relant takes the greatest pleasure in his killing, holding the souls of his victims within him. It is important that this fever be quelled, for the good of the whole world. If there was even the slightest chance… Well, I put my assurances in you.”

“Well,” she said carefully, crossing her arms, “what’s in it for you?”

Mowat smiled an age-old smile. His eyes shone with the glow of the sun on the Ocean, and the ancient, migrating whales.

“I must protect what is innocent and good, both humans and magical creatures alike. I am bound to pure goodness. If they are destroyed, so shall my spirit be. Relant is a rebel of all things good. He aims to upset a careful balance I put in place long ago. I seek help because I am bound to certain ‘rules,’ if you will, and it was in you, in your goodness that I saw that which could save us all.”

Mowat laughed. A ray of sunlight burst from behind him, turning all the stars around them into millions of crystals. A million tiny rainbows shivered across her face.

“Aside from what it will teach you personally, for I say you have much to learn and space to grow, if you break each spell by facing Relant’s guardians then the world and everyone in it will be rid of this fever. If you face what the rest of us cannot, then the world can be reunited. A new era will begin.”

Deiji drew her eyebrows together in consternation. “Are you saying this plague is because of this Relant creature?”

“That is what I said,” he nodded gravely. “If you do this, and succeed, all those affected by this illness will be restored to full health, as well as those who have lost their lives to it.”

There was a long silence. Her jaw dropped.

“My… My mother. My father!” she gasped. She could not say it aloud. She thought of her beloved father in his grave, of her ailing mother and she was filled with a vengeance towards that which could now be in her control.

“On top of these things,” he continued, “I will grant you your personal freedom, free of all social obligation. Once you have seen the world, and understand your place in it, you may choose any life you please, and I will send you there. And no one, nay, not a single soul will judge you harshly for your decisions.”

Deiji nodded, fighting tears again. This was it! Biggeriones Omino. The Way. She felt a swell of pride and fear as she realized what her life might be, and with what purpose. Many innocent people were relying on her choices.

“What must I do?” she asked with seriousness.

“You will reunite the world. I will move you to four specific locations around the world of Nigh where you must face four of Relant’s creatures, the Guardians of that Element’s spell. With each passing day you will encounter hardships, defeat pending trials and accept new concepts that will further mold your genuine character. You now know Arill?”

“Arill will come see you towards the end of each Element to give you further instruction. Just focus on the task at hand once you have spoken to him. There will be many difficulties and hardships ahead of you if you do this. It is quite likely that you may die. This is not some fantasy I have conjured up, it is quite real. You must remember that, it’s important.” His expression was curious, questioning. Was it doubt? Deiji couldn’t be sure.

She shook it from her head and nodded, taking it all in.

“Do you see the medallion?”

Deiji looked down at her hand where she still clutched the silver bit that she had pried from the rocks, so tightly that it dug into her flesh. Drops of blood spilled into space, dissolving into nothingness.

It was a silver amulet set into a large, circular bit with four stones on the edges, and a larger one in the center, as black as the space around her. One was a Ruby engulfed in engravings of flames; an Emerald tangled in vines; a Sapphire in river waters; and sparkling diamond amidst clouds.

“You will wear this pendant always, Deiji. When Arill is near, it will… remind you.” He gave a mysterious smile, then his tone turned serious.

She remembered the pendant’s glow and grinned.

“Are you sure you consent to this?”

“Then I purge you through fire! Deicio Ferula!” Mowat commanded.

The stars and the Teacher faded away, and Deiji found herself lying in ocean waves.

A deadly plague ravages both humans and mystical creatures alike in the divided world of Nigh. A young woman named Deiji is recruited by a mysterious necromancer named Mowat to break the spell on each of the four elements, in order to quell the fever that Mowat’s mortal enemy, Relant, brought upon the world and thereby reunite the continents. Hoping to escape an arranged marriage, Deiji is all too eager to accept Mowat’s proposition. She leaves her simple village life behind and is thrust blindly into distant regions of the unmapped, uncharted world. She must enter the elements of fire, water, earth, and air, where she subsists on a desert island, tracks her way through the deep forest and even explores the ocean as a mermaid. She battles tigers and giant squid, all leading to the final struggle against the evil Relant himself. Only time will tell if Deiji has what it takes to meet the challenge and save her world.

Davina Marie Liberty (yes, that’s her real name!) works as a traveling Equine Sports Massage Therapist and Holistic Hoof Care Practitioner across northern California. She takes her own horses in Endurance rides and horse shows for fun and in her spare time (it does happen!) she writes and travels internationally. Davina lives in the northern California redwoods with her husband Lu Liberty, and their dogs and horses. This is her first novel.