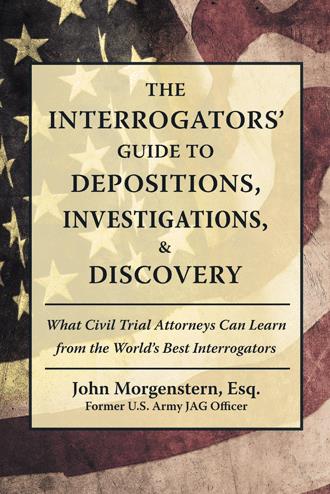 When details of the treatment by certain service members of detainees at the Abu Ghraib prison emerged, traditional interrogation tactics and techniques immediately came under close scrutiny on the world stage. The scandal could not have come at a worse time as many American and Coalition service members had made meaningful connections in many local communities. The sudden avalanche of anti-American sentiment put the lives of every service member and the people who had begun to trust them at risk.

The Army’s entire curriculum on intelligence interrogation, which was first implemented in 1956, was opened to scrutiny before the highest levels of our government and the intelligence agencies of our allies. Commentary and guidance was sought from the most learned sources in America and abroad. Changes in our interrogation techniques were implemented immediately. We tried all sorts of different approaches for interviewing witnesses, debriefing members of friendly military forces, and interrogating suspects, including captured enemy combatants. Our intelligence community carefully compiled notes and statistics on which techniques worked and others that did not work at all. We learned which of our former techniques were counterproductive and produced no useful intelligence while fueling our foes’ determination to defeat our cause. We discovered new tactics that produced useful intelligence as well as loyal citizens and reliable sources of information moving forward.

As a result of the changing times, the military, intelligence, and law enforcement communities have made greater strides in recent years in interrogation methods than during any other period in history. The law enforcement community is making vast improvements to its methods for identifying the best, fairest, and most effective ways of eliciting information, evidence, testimony, and confessions. The military and intelligence communities have come up with new ways to quickly and effectively gather information necessary to keep the world safe.

The greatest minds in military, intelligence, and law enforcement interrogations came together and produced revolutionary new tactics for gathering human intelligence that are directly applicable to investigations and depositions in civil litigation.

Since Abu Ghraib, there has been a renewed focus internationally on the techniques used by the German Luftwaffe’s master interrogator, Hanns Joachim Scharff, during World War II. This book presents the proven methods used by Scharff during interrogations of downed American and British fighter pilots that work well today in investigations and depositions in civil cases. Section One discusses these and other historical, time-proven methods for gaining information in addition to the latest approaches that have become the new standard in the military and intelligence communities.

Section Two is about using personality profiles, reading body language, and exploiting other indicia to conduct effective depositions and interviews. This section offers advice on working with difficult and challenging witnesses, including children, disabled and infirm individuals, and particularly uncooperative witnesses.

Section Three presents important practical skills of trained interrogators for preparing for depositions and setting the stage for a successful and productive encounter with any witness. It instructs on taking and keeping control of the physical environment as well as planning the timing and sequence of your deposition. This section will tell you how to maintain your bearing and composure under pressure for extended periods of time, including the best ways to fuel your brain for mental acuity and endurance.

The process that began in 2006 by President George W. Bush’s Executive Order 13440 of July 20, 2007, led to President Barack Obama’s Executive Order 13491 of January 2009. Ultimately, the efforts of both Commanders in Chief toward recreating the U.S. government’s intelligence program culminated in the September 2016 report titled Interrogation: Review of the Science from the High-Value Detainee Interrogation Group (“HIG”). The HIG collected and analyzed decades of statistics virtually all available data on interrogations. This book traces the history of interrogation techniques from the beginning of our nation and applies the most relevant features of today’s military, intelligence, and domestic police programs to the legal profession.

Captain John Morgenstern served in many roles in America’s War on Terror during his military career as a JAG officer in the U.S. Army.

While overseas, he saw the most effective and successful interrogation and investigation methods, and during his civilian law career, which includes defending officers accused of civil rights violations, he’s developed expertise on public law enforcement methods.

In this guide for civil trial lawyers and investigators, he shares the most effective and appropriate ways of communicating with witnesses and deponents to obtain truthful, reliable, and verifiable testimony and evidence to help make your case.

You’ll also learn how to use personality profiles, read body language, and exploit other indicia to conduct effective depositions and interviews, including with children, disabled and infirm individuals, and uncooperative witnesses.

Get the practical skills you need to prepare for depositions, and maximize your chances of enjoying productive encounters with witnesses with The Interrogators’ Guide to Depositions, Investigations, & Discovery.

John Morgenstern, Esq., is a top-rated Philadelphia attorney. In his prior military career, he was awarded the Bronze Star Medal in Iraq in 2004. He is rated AV® Preeminent™ by Martindale-Hubbell®, the highest possible rating for both legal ability and ethical standards, and has been named among America's Top 100 Civil Defense Litigators (PA). He lives in Wilmington, Delaware, with his wife and their two children.