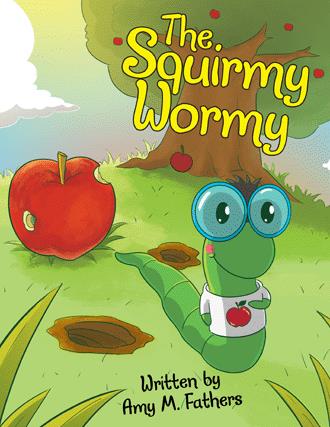 There once was a little wormy.

All of his friends called him Squirmy

He loved to dig holes in the dirt

And wore an apple on his shirt.

Squirmy lived in the front of a big old house

High up on a hill with his friend Squeak the Mouse.

Andy the Ant was also part of the squad

When he wasn’t down deep and stuck in the sod.

The crew lived in a town called Apple Creek,

And when it rained hard, the roofs would all leak.

Up and down the hill the two would go,

But when the winter came, there was snow.

Then the spring would arrive, and the flowers would sprout,

And there was no reason for Squirmy, Squeak or Andy to pout.

Squirmy Wormy, Squeak the Mouse, and Andy the Ant live a charmed life in the little town of Apple Creek. They play in the countryside and enjoy the four different seasons. As the months change, the trio gets to play in the snow, smell the spring flowers, bask in the summer sun, and see the beautiful leaves changing in the fall.

A picture book for children, The Squirmy Wormy helps young ones learn about the fun aspects of the varying seasons and serves to inspire their own adventures in the natural world.

Amy Marie Fathers grew up in Belmont, Massachusetts, where she spent her childhood enjoying summers in the sand, winter on skis, fall in apple orchards, and spring mostly under umbrellas. Amy has been in the public relations industry for nearly twenty years, working with clients in the financial and professional services industries. She spent two years in Bangalore, India, and she traveled extensively throughout that country and elsewhere in Asia and the Middle East. In her free time, Amy volunteers at a local animal shelter and trains for her next marathon! She currently lives in Manhasset, New York, with her husband, John, son, Peter, dog, Sula, and cat, Mathey.