Five Hospitals and a Medical Journey Through Hell

Don’t Think This Couldn’t Happen to You 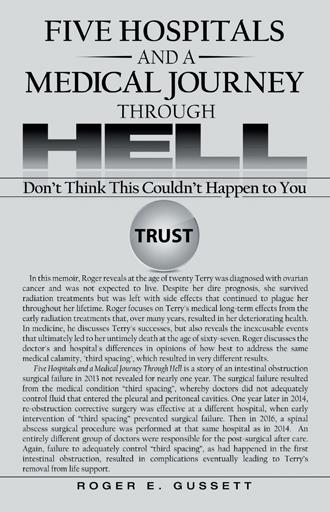 There are some people in this world that go through life with merely a blemish. Others such as Terry, my companion for over thirty years, endured hardships from the very early years of her life and continued those hardships throughout her lifetime. This is a true story of one of those unfortunate truly remarkable individuals that despite all life's misfortunes became a successful entrepreneur. Her father who was initially a very successful business man, due to a business failure committed suicide while Terry was the tender age of nine. Her mother then became an alcoholic and her grandmother assumed the responsibility to raise her. At the age of twenty Terry became a victim of ovarian cancer and was not expected to live. Despite her dire prognosis she survived radiation treatments but was left with life long side affects that plagued her throughout her lifetime. Even still her entrepreneurialism allowed her to proceed through life to experience the joy of achievements of many occupations. Her biggest achievements were as an interior decorator which led her to becoming a builder of homes and ultimately to become a developer. The main scope of this book centers around her medical long term affects from radiation treatments that over many years resulted in a gradual deterioration in her health. In medicine it exposes the successes, but in the end it reveals some of the inexcusable events that led to her death. We together traveled thousands of medical miles hoping for a resolution that never came. My profession was a veterinarian small animal practitioner, owner of my own small animal business for over 40 years. Prior to that I had been a member of the United States Army Veterinary Corp serving in multiple capacities as food inspection, large and small animal disease treatment and prevention. Through my medical experience and training I was able to assist Terry in her daily struggles. This story has been presented factually to the best of my ability as to remembering events and timelines as we together traveled through " five hospitals on our medical journey through hell".

In this memoir, Roger reveals at the age of twenty Terry was diagnosed with ovarian cancer and was not expected to live. Despite her dire prognosis, she survived radiation treatments but was left with side effects that continued to plague her throughout her lifetime. Roger focuses on Terry's medical long-term effects from the early radiation treatments that, over many years, resulted in her deteriorating health. In medicine, he discusses Terry's successes, but also reveals the inexcusable events that ultimately led to her untimely death at the age of sixty-seven. Roger discusses the doctor's and hospital's differences in opinions of how best to address the same medical calamity, "third spacing", which resulted in very different results.

Five Hospitals and a Medical Journey Through Hell is a story of an intestinal obstruction surgical failure in 2013 not revealed for nearly one year. The surgical failure resulted from the medical condition “third spacing”, whereby doctors did not adequately control fluid that entered the pleural and peritoneal cavities. One year later in 2014, re-obstruction corrective surgery was effective at a different hospital, when early intervention of “third spacing” prevented surgical failure. Then in 2016, a spinal abscess surgical procedure was performed at that same hospital as in 2014. An entirely different group of doctors were responsible for the post-surgical after care. Again, failure to adequately control “third spacing”, as had happened in the first intestinal obstruction, resulted in complications eventually leading to Terry’s removal from life support.

Roger E Gussett was born in Columbus, Ohio. His parents divorced at an early age, and the family moved to a small 75-acre farm to live with his grandparents. The rural setting resulted in Roger’s interest in Veterinary Medicine. In 1968, Roger graduated from The Ohio State University Veterinary College and then joined the Army Veterinary Corp for two years. Following service, Roger entered private practice to form Airport Animal Hospital, specializing in small animal medicine. He recently retired following 40+ years of service. Roger’s interest in becoming an author was piqued following 3 years of shadowing the human medical field of his companion of 30 years that was placed on life support following unusual circumstances.