The Chase after Midnight 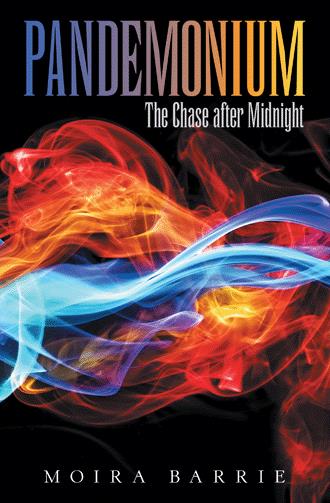 As we taxi out, I rest my head alongside the window and just stare out, thinking about going home. Something odd is happening on the tarmac. There is a situation between a man in a long black coat and one of the baggage handlers. My eyes must be deceiving me when the coated man reveals his face.

Sporting the same evil, dark black eyes that were glaring back at me in the bathroom mirror. He is dressed in black from head to toe, with military-style boots on the outside of his pants. At the snap of his finger two creatures appear beside him. Four-legged, like dogs, but without paws. Instead they have what look like hands with long, green nails. They are covered in white fur, with no eyes that I can see from here, just black holes. They both have wolf like bodies and faces. Their curly tails reach the center of their bodies. What the hell are those things?

Victor makes eye contact with me, and for a second everything stops, including those growling hellhounds. Time pauses. He is walking closer to me. Why do I have to be trapped on a plane? Just great. Stillness takes over me instead of panic. I just watch as he continues to now glide across the air and hovers outside my window. He has an emotionless face as he tries to read into mine.

My brother, here, impossible. I turn to look at Dino, but he is frozen in time along with everyone else on this plane. In that second, when I gaze back out the window, Victor has moved. He is back by the evil creatures and snapping his fingers. Suddenly, time resumes as the hellhounds bare teeth and attack the baggage man.

My screams awaken everyone on the plane from their trance, just in time to see the baggage man dying on the tarmac, with no one near him.

After graduating from university, twenty-four-year-old Ava Buchanan has moved to a tiny town in Pennsylvania in order to keep her mother company. Victor—her brother and a member of a secretive military organization—calls her every year around her birthday for an awkward conversation, but otherwise, her life is generally peaceful.

Recently, however, Ava’s dreams have turned odd and foreboding: a handsome protector emerges to save her as the world she knows becomes a postapocalyptic wasteland. Add to that the dark and unexpected presence of Victor in her life for more than the occasional call, and Ava begins to feel like something is amiss. At first, she is able to convince herself her dreams are just that: dreams. But she won’t be so lucky. As Ava unravels the mystery of her destiny and connects with people who can help her fulfill it, she discovers there are dark forces intent on destroying her.

In this novel, a young woman having strange dreams discovers that she has powers beyond her imagination—and must face equally unimaginable dangers.

Moira Barrie is an avid animal lover. When she is not working her day job or writing, she is outside enjoying all Mother Nature has to offer. She finds comfort in family and volunteering when she can. She currently lives in Marlton, New Jersey.