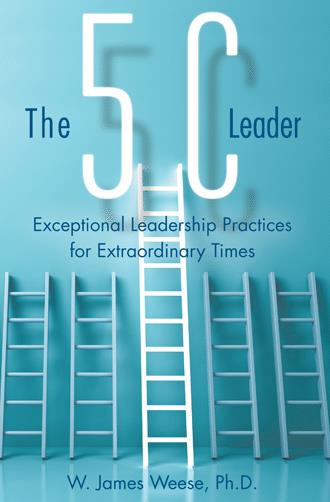 Want to be a leader, or perhaps a better leader? If so – The Five C’s of Leadership: Exceptional Leadership Practices for Extraordinary Times is the book for you.

Weese distills over 100 years of leadership research and theory development, couples it with his extensive research program, mixes in his consulting experience and his practical experience and delivers a leadership book for the ages. This book is required reading for anyone interested in learning more about leadership and/or being a more effective leader.

In Chapter One, readers are taken on a journey through the theoretical developments in leadership research. Readers will know that the area of leadership has captured the interests of scholars and practitioners alike. Readers will also be provided with information on the profound impact that leaders can have on people, and on the groups or organizations that they lead. This material, coupled with the “On the Shoulders of Giants” section provide the rock-solid foundation for his Five C concept.

Readers are also presented with a diagnostic tool that they can use to measure their Five C Leadership Practices and determine their relative strengths and areas for development (i.e., LAQ - Self form and the LAQ - Other form). An interpretive guide is provided to add meaning for the specific LAQ - Self and LAQ - Other scores for each of the five scales.

This book has been prepared to focus on the area of executive leadership and the application of its contents will help current and aspiring leaders deliver exceptional leadership. Examples of leaders from a plethora of industries and settings are profiled to help explain and apply one or all of the Five Cs. While contemporary examples of transformative leaders like Angela Merkel, Elon Musk, Mark Zuckerberg, Justin Trudeau, Sheryl Sandberg, and Jeff Bezos are highlighted and highly appropriate, their leadership practices and accomplishments are ongoing. As a result, Weese takes a page out of a good biographer’s guidebook and focuses on leaders whose major accomplishments are complete. They can’t change course. Their work is done. As a result, you will read about Steve Jobs, Pierre Elliot Trudeau, Herb Kelleher, Barack Obama, Bill Clinton, and Mary Kay Ash in addition to understanding the leadership practices of leaders like Ray Kroc, Sam Walton, Ronald Reagan and Frank Purdue.

Being an effective leader is not easy, but the good ones make it look easy. They build strong leadership teams comprised of members with complementary skill sets and orientations. They ensure and communicate a clear, clairvoyant vision that the overwhelming majority of members embrace and take ownership for attaining. They lead from an emotional intelligence base that brings the best out in stakeholders. They ensure that a crystal-clear vision and behaviour code and progressive edge is baked into an organizational culture that supports and sustains success. Sounds easy – and it could be. That said, anyone who has been a leader knows that there are high and low periods. However, effective leaders stay the course, and in so doing, serve as a breath of fresh air to their organizations and to the people who comprise them. Unfortunately, effective leadership is not omnipresent and when it is observable, it is often fleeting.

Leadership researchers routinely suggest that people lack confidence in their leaders. However, it is Weese's contention that effectively leading a group is not as arduous, fleeting, or impossible as some suggest. Blue ribbon examples of effective leaders abound in a host of different situations from sports, government, business, education, and social movements. To a large degree, effective leadership involves the application of a few common-sense principles that need to be universally and consistently applied. Weese provides a clear and practical blueprint for current and aspiring leaders who seek to heighten their effectiveness.

Some leaders make it look easy. Others who have every opportunity to lead effectively make it appear impossible. One thing is certain with leadership: People notice it when it is absent.

W. James Weese, a professor of leadership at one of Canada’s top universities, advances the concept of leadership in his exciting book.

In doing so, he argues that the best leaders exhibit 5C qualities: credibility, compelling vision, charismatic communicator, contagious enthusiasm, and culture builder. He explores how leaders can effectively:

engage as a partner and a participant in the leadership process;

develop a community of leaders committed to a clear vision; and

open the way to greater clarity, alignment, and effectiveness.

The author provides a thorough overview and theoretical grounding for each of his 5C’s in addition to exercises and a diagnostic tool so readers can assess their leadership strengths and areas for development.

Discover the foundational components you must cultivate to inspire others, overcome challenges, and achieve results with the lessons outlined in The Five C Leader.

Dr. Jim Weese is an authority on leadership, a gifted speaker, and a community leader. He teaches and conducts research at one of Canada’s top universities, where he also excelled in senior leadership roles. He has also consulted with some of the most admired companies in the world.

Weese is a professor of leadership and the former dean of the faculty of health sciences (2004–2015) at The University of Western Ontario in London, Ontario, Canada. He has also served as the special advisor to the provost and later as the acting associate vice-president (international) at Western. He was the dean of the faculty of human kinetics (1999–2004) at the University of Windsor prior to moving to Western in 2004. He is a transformational leader who has garnered impressive results in a variety of senior leadership positions throughout his distinguished career. He has engaged and informed audiences across many sectors on the merits of a team approach to leadership. His Five C Concept of Leadership serves as the foundation to his approach to leadership.

He is heralded as a transformational academic leader whose research papers appear in the top journals in his field. He is a dynamic speaker who has delivered a number of scholarly and keynote addresses to national and international audiences, as well as to practitioners who find his content and delivery style to be highly relevant and scalable. He has served as a leadership consultant with both nonprofit organizations and multinational companies, and he specializes in delivering workshops to academic leaders.

Those who have been influenced by his writing or presentations or experienced his leadership firsthand understand the importance and utility of his Five C concept, credibility, compelling vision, charismatic communication, contagious enthusiasm, and culture building, to facilitating leadership success and survival. Weese places specific emphasis on the importance of team leadership and leading from an emotional intelligence perspective. Through his words and actions, he teaches others how to effectively engage colleagues so they feel valued, engaged, and respected. It is not lost on him that others are writing and speaking about the merits of a team approach to leadership. It has made sense to him throughout his thorough training and his distinguished career.

He has served in a number of senior leadership positions during his career, including serving as the president of the North American Society for Sport Management and president of the National Deans Councils for both Kinesiology (CCUPEKA) and Health Sciences Deans (CAHSD). He is currently a member of a number of volunteer boards, including the YMCA of Western Ontario and the Sunningdale Golf and Country Club.

Dr. Weese lives in London, Ontario, with his wife, Sherri; son, Zach; and daughter, Haylee. His passions include golf, hockey, guitar, and gardening.