Life from the Ashes 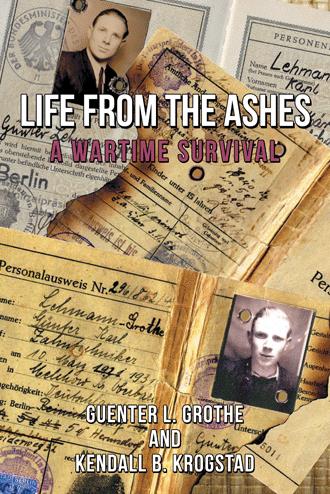 We knew the Russians were coming into our area when we heard the noise of the tanks and other armor. My father was a hunter and had several guns, and when he heard the Russians coming, he quickly gathered the guns and hid them in the concrete trash bin between the apartments and the dairy. He reasoned that it would be safer not to have the guns in the house.

I was fourteen, the age of first communion -- Jugendweihe. The ceremony had required a new suit of clothes. The suit was new and dressy, and my mother told me to put it on instead of my usual work or school clothes. It was the only suit I had, and I was soon dressed in it.

Everything resembling normal life was at a standstill. All businesses and schools were closed. Even the dairy behind the apartments had been abandoned.

The Russians arrived early that morning, April 21, at about 9 AM. Tanks came first, followed by horse-drawn wagons and trucks, all well armed, and there was no German military resistance. It wasn't long before the Russian infantry came into the village. The Russian army consisted of Soviet Russians, Cossacks, Mongols, and other ethnic groups or tribes. We considered them all to be Russians.

From our second-floor apartment vantage point, we saw that the Russians had collected several local men, perhaps six, from the town. We did not know why those particular men had been selected and assembled into a captive group. Treating the men roughly, the Russians forced the men to stand side by side, lined up along the stone wall at the cemetery that we could see from our windows. The Russians summarily executed all of them. Shocked and horrified, I couldn’t believe my eyes as I was witnessing the murder of townspeople I had lived near and had come to know. My mother turned and put her head against my father's chest, sobbing. The Russians turned and left, letting the men lie where they had just been killed.

Within minutes after the execution, three Russian soldiers were discussing something among themselves and were pointing at our apartment. Then they approached our apartment building. We were terror stricken.

The three Russians, carrying automatic rifles, stormed up the stairway and entered our apartment without hesitation. We huddled together in the kitchen as they went from room to room to assure themselves that no one in the apartment was armed. We had no defense.

They were shouting "Rous, rous!" and motioned us to the door. In their broken German they were telling us to get out of the apartment because the Russian commander wanted to take over the apartment as their headquarters. My mother told me to go get some chickens, and I started toward the door. My father quickly gathered some clothes and blankets. My father, Hildegard, and I were then forced to go downstairs as some men forced my mother, now wailing hysterically, into the bedroom.

I ran to the barn to gather the chickens and release the rabbits. I was confused, upset, and angry. My world was turning upside down. I was terrified of what might happen to us, and I was in a state of agitation and shock as I mechanically carried out my parents' instructions. I was to take the few chickens alive in a bag, but I didn't realize that they were supposed to remain alive, and in a daze and stifled anger, I chopped their heads off and put them in the bag. Then I released all the rabbits from their hutches, freeing them into the yard. I carried the bag to the front of the house.

My father had been allowed back upstairs to get some additional necessities, and my mother was then coming down the stairs with him. She was sobbing. She had been raped.

We were allowed to gather a few survival things that we put in a hand-drawn wagon -- Handwagen -- that was one-and-ahalf meters by a meter, with four wheels, the front ones steered with a long handle. We had also loaded two of our bicycles with belongings, but the Russians roughly took the bicycles from us, saying that we could not take them. They did not speak German but brokenly, and with crude hand gestures expressed their displeasure at our actions and presence.

One of the soldiers, grimacing, grabbed my arm and roughly took my watch. Grinning at me, he put it on himself. The watch had been given to me only the previous month for my fourteenth birthday. I dared not indicate any umbrage, but I was inwardly hurt, resentful, and angry. I learned later that few Russians had watches, and it was a coveted status symbol.

It was clear that the four of us had to get away from them as soon as possible. The only belongings that we could save we piled onto the wagon; clothing, what food we could sneak out, a few dishes, and whatever else we had hastily gathered that we might need including knives, forks, a couple of cooking pots, a couple of light blankets and our water bottles.

I made a quick run to the dairy house and found a large block of butter -- a couple of kilos -- which I brought back and managed to sneak onto the wagon. We didn’t have room on the wagon for all the provisions we had taken from the house and had to leave some of the bulky items on the ground.

One young, slim Russian soldier about my size, seeing me dressed in my new suit and motioning to me, demanded that I had to remove my pants, shoes, and jacket and give them to him. Standing by the wagon in the snow, I had to undress and hand him my clothes and shoes. He also wanted my silver and gold high school class ring that had my initials engraved on the top of it. I had it since I started high school. The soldier grabbed my hand and tried to take the ring off my finger, but the ring would not come off. He produced his knife and was about to remove my finger. My mother stifled a scream as my father held her tightly. I was terrified, and in a panic I managed to get the ring off my finger and hand it to the soldier. Inside I was racked with fear, hatred, and anger, but turning away, I dared not display any emotion.

Guenter L. Grothe was born in Melchow, Germany, in 1931, at the height of the great depression. Adolf Hitler was becoming a political powerhouse, promising jobs and proposing the reclaiming of that portion of Poland that had been removed from Germany as part of the World War I armistice. His agenda was popular with the general public, and he was elected chancellor in 1933. Hitler then began his autocratic rule.

In the late 1930s, life for Grothe and his family was pleasant and calm, but after Hitler's army invaded Poland on September 1, 1939, the war rapidly escalated to World War II, against the reservations of most of the German population. The Grothe family lived through the relentless destruction, but as Germany succumbed, a lawless army of Russians rampaged through eastern Germany murdering, looting, and raping. The Grothe family survived but lost everything. Destitute and living under an oppressive communist regime, they tirelessly strived to survive, rebuild, and restore dignity to their lives.

Under threat of arrest, Grothe defected and had to wait three years before getting a visa to come to the United States of America, where he became the independent owner of a successful dental laboratory.

Join Grothe as he looks back at surviving the horrors of a dictatorial, dispassionate, regime that viewed German workers as slaves, and how he immigrated to America to achieve his American Dream.

Kendall B. Krogstad has forged the Grothe memoir into a readable excursion into living through the horrors of WWII and rising through the ashes of war to become a successful businessman and the epitome of the American Dream.
Krogstad is also the author of Exploration Pilot - The Flying Adventure, which is a compelling account of his extraordinary, often risky missions, including gripping episodes of calamities and near disasters, finally ending in an enigmatic, criminal incident.

Guenther Lehmann Grothe and his family were victims of the cruel Russian invasion of Germany at the end of World War II. Despite living under an oppressive regime, he dedicated himself to restoring his family’s dignity. After defecting, he waited three years before getting a visa to come to the United States of America, where he became the independent owner of a successful dental laboratory.

Kendall B. Krogstad is also the author of Exploration Pilot - The Flying Adventure, which is a compelling account of his extraordinary, often risky missions, including gripping episodes of calamities and near disasters, finally ending in an enigmatic, criminal incident.