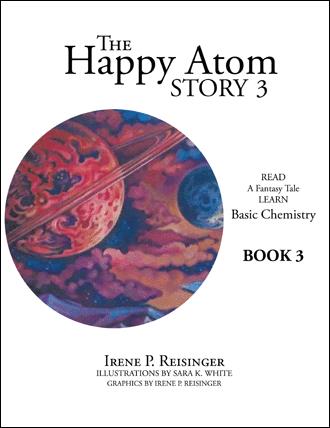 Professor Terry answered, “There’s a lot to see here and lots of magic in Periodic Table Land. There’s even some new magic that you haven’t seen yet. Let’s get to Sodium’s house and see what special surprise he has for us today.”

They passed Lithium’s place on 1st Street and soon they were at Sodium’s house. Sodium was sitting in his rocking chair on the front porch waiting for them. Sodium said, “I’m happy you made it so soon. I have a surprise for you on the other side of my house.” When they turned the corner of Sodium’s lovely home, they saw what Sodium had ready for them. It was a large bubble, different from the one Guy had used to fly around Periodic Table Land. They walked closer to get a better view of it.

As Sodium and Professor Terry began discussing details about the bubble, Guy wandered over to look more closely at the new flowers Sodium had planted in his rock garden. He spotted a frog swimming in the little pond in the middle of the garden. While Guy was enjoying nature, Professor Terry climbed into the bubble to check out the interior and the controls in the bubble. When Guy returned from admiring the garden, Professor Terry seemed to have vanished. Guy said, “So where’s Professor Terry?”

Sodium said, “Professor Terry has not gone anywhere, she is in the magic bubble.” Guy was looking right at the clear bubble, yet he couldn’t see any sign of her. Sodium said, “Stick your head into the bubble, Guy.” He looked in, and there was Professor Terry big as life sitting inside. Sodium explained, “This magic bubble will make you and Professor Terry invisible.” Guy’s face lit up as his imagination ran wild with possibilities. “Professor Terry wants you to learn how compounds are formed. This magic bubble will allow you to be really close to where the atoms are becoming compounds without being in the way. You can be right up close and you will not interfere with what is happening. There is even a button on the control panel which will make the entire bubble invisible. Now, climb into the magic bubble and fly to 7th Street. I’ll be there soon,”

Professor Terry waved the magic wand, the bubble rose straight up, and then floated effortlessly over the trees, moving quickly and quietly toward 7th Street. There they would hopefully witness Sodium and Chlorine create their first compound. The atoms have been sad for so long that seeing them form a compound and become Happy Atoms will be a historic event in Periodic Table Land. “Let’s set up where the action will take place,” said Professor Terry.

Not too much later, Sodium arrived in his bubble. His family’s light green balloons lowered him to a gentle landing on the grassy field behind 7th Street. He walked the short distance to 7th Street’s entrance on the trail through the pine forest.

Chlorine was busy planting colorful flowers at the base of the Halogen’s flag pole. The lovely Halogen flag was hanging limply above as the wind had died down.

Sodium cheerfully greeted Chlorine. “Hi there. Do you remember me? I’m that element who stopped by to see you while I was searching for a Happy Atom.”

“Ah yes, and looking at your smiling face, I would guess that you found one,“ said Chlorine.

“Well, yes. I found more than one. As a matter of fact, I found a whole family of Happy Atoms on 8th Street. Astatine was right when he said he heard a faint sound of laughter coming from 8th Street.” He then recounted the whole exciting story of his discovery. “Now I’m here to share with you a plan I’ve devised to make us all Happy Atoms like the ones I found on 8th Street.“Let me hear your plan. We have been sad too long,” said Chlorine.

Sodium Explains How to Become a Happy Atom

“OK,” said Sodium. “Becoming a Happy Atom is all about our Outside Energy Level. If that level is complete, an atom can be happy. It’s that simple.”

Chlorine said, “Back track a little. What does it mean for an Outside Energy Level to be complete?”

Chlorine said, “We live on 7th Street, Group 7A on the Periodic Table. So all the Halogens have seven electrons in our Outside Energy Level.”

Sodium said, “That’s why you are sad. To be happy you need 8 electrons. You are missing one electron. You have an empty space in your Outside Energy Level. You need to get one more electron to be complete.”

Chlorine looked at his Outside Energy Level and said,“You are right. if we need 8 electrons to be complete, all the elements here on 7th Street need to get one more electron. Then, we will become a Happy Atom.”

“It’s even better than that Chlorine. Together we are going to create something new, a compound. It’s very exciting.”

Chlorine glanced again at his outside energy level and saw that one empty space that needed to be filled if he was going to be a Happy Atom, and form a compound. A ray of hope began to grow in this sad little atom. 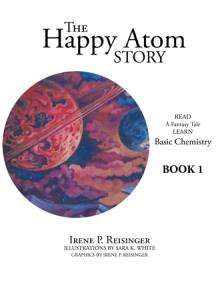 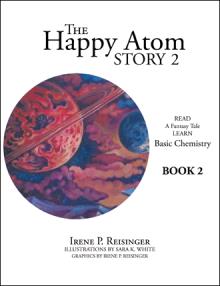 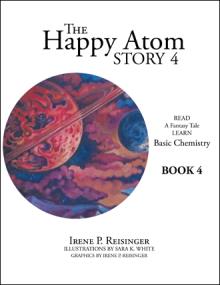 Welcome to The Happy Atom Story–Book 3. If you’ve read Books 1 and 2 you know that Guy’s adventures in Periodic Table Land are woven into a fantasy tale. It’s the silly electrons, the proper protons and the dear little atoms who help Guy learn about the Periodic Table, the structure of the atom, and the Chemical Families. As Book 2 ends, we discover that the elements are incredibly sad with tears running down their dear little atom faces. Sodium’s investigation to find a way to make them happy ends successfully on 8th Street where he discovers a whole family of Happy Atoms, the Noble Gases. The secret is –atoms are happy when their Outside Energy Level is complete with the right number of electrons. In this book the little atoms discover that something spectacular happens when they become happy. They become a new creation, a compound. Word soon spreads to all the Chemical Families in Periodic Table Land. Then, there is no stopping them. As you read Book 3 you’ll discover the many ways the elements find to form compounds. Climb into the magic bubble and become invisible with Professor Terry and Guy. Swoop off to 7th Street and watch the Alkali Metals form the first Happy Atom ever with the Halogens. See their smiles as they finally become happy. Observe why compounds need an exact number of atoms to make a compound. Note the elements get a new name and a formula when they become a compound. Be there when Guy excitedly discovers the meaning of water’s formula, H2O. Before the book ends Guy learns the Valence Method and discovers how easy it is to write chemical formulas. You will too. Let the Happy Atoms get you excited about chemistry. Read, enjoy and learn!

Mrs. Reisinger possesses a rare combination of talent needed to produce this book: a comprehensive knowledge of chemistry, a deep understanding of the middle school student and the imagination needed to change solid basic chemistry into a fantasy tale. She earned her Bachelor’s Degree from Fordham University receiving the university’s gold medal, awarded to the graduate with the highest honors in Chemistry. Working as a chemist on a medical research team and nineteen years of experience teaching basic chemistry gave her a command of the concepts of chemistry and an understanding of the middle school student needed to write this book. Through her Masters Degree in Science Education, earned at New York University, she learned to be a creative science teacher. Her creativity and imagination were enhanced as she became involved in primary education, and as she raised her five children. She created the story about Happy Atoms on which this book is based one day when her students were not getting the lesson taught traditionally. This story was widely recognized at her middle school for its success in helping students learn chemistry. Her colleagues, especially the special education teachers, urged her to publish her story because it would help so many people. It was when she retired that she had time to write. The author wrote The Happy Atom Story to help anyone at any level attain a firm knowledge of basic chemistry on which to succeed in a chemistry classroom.