The Many Worlds of Rorlitzer Screw 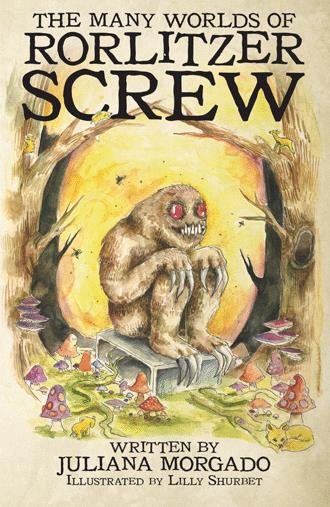 The Many Worlds of Rorlitzer Screw Preview Text:

It was then, while suspended and afraid, that he realized he wasn’t alone. Hunched bodies crept up and down individual ladders all around him. Their eyes glistened red in the darkness. Sharp teeth protruded from their mouths, and their dark furry bodies moved as silently as stars. He couldn’t tell if they noticed him or not, but he continued down the snaking ladder, shaking with every step.

After what felt like miles of descending, Collin made it to the last rung. Exhausted, his last step was more like a fall from the ladder, and a great clang came from his feet landing on the ground.The surface of this new world and every part of its scenery was made of rusting metal. Pipes coiled all around them like vines in a jungle. The golden animals strode forward like tiny sunspots in an eternity of corrosion.

“I know you’re there. I’ve felt you following me,” Collin whispered.

“Good instincts,” the creature said. It crept down a pipe with such impossible physical ease that when their faces met, Collin was upright and the creature was upside down. Collin recognized its kind from the ladder world.

“What are you?” Collin asked.

“I’m from a species known as Realm Watchers.” The creature’s voice was a hiss that lingered in the air.

“You use the ladders?”

“To go where?” Collin asked.

“To go everywhere,” it answered.

“Everywhere in the world?”

The creature paused for a moment and then said, “To go everywhere in your world and everywhere in all worlds and all the times in all the worlds that have been and will be too.”

Collin’s eyes examined Rorlitzer Screw, and he noted that there was something eerily familiar about it, like reading your own name on a tombstone while walking through a graveyard.

“Better keep up with the Tinies, Collin.” Rorlitzer Screw nodded toward the golden animals. “Not everyone who finds us is lucky enough to have protection.”

In secret worlds connected to our own there are ageless creatures that know each of us intimately well. Tasked only to observe and instructed never to interfere, they monitor us from afar throughout our lives. I have one. You have one. And on a curious quest through the unknown, eleven-year-old Collin meets his. Its name is Rorlitzer Screw.

In her debut book The Many Worlds of Rorlitzer Screw, author Juliana Morgado takes us on an adventure through strange realms. Prompted by the awakening of his father’s long-held secrets, Collin follows a trifecta of tiny golden animals out of his bedroom window and into dangerous worlds unexplored by most humans. In order to make it home alive, he’ll have to survive hungry monsters and threatening terrain. Hardest of all—with Rorlitzer Screw ever at his side—he’ll have to confront the realities of life, death, and the meaning of sacrifice.

With Morgado’s entertaining text and Lilly Shurbet’s whimsical illustrations, an imaginative world unfolds that one can usually only dream about.

Juliana Morgado was born and raised in Birmingham, Alabama. She writes poetry and fiction that explore the depths of magical realism.

Lilly Shurbet, also a Birmingham native, has tried to translate and recreate the dreamworld since 1996. This is their first book.