An Old Chaos of the Sun 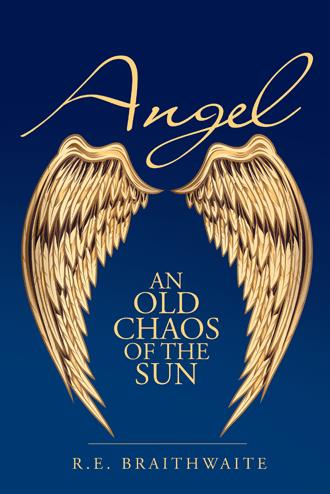 Angel angled the light next to the bed so it wouldn be in Jackie's eyes and found his bookmarked place. Gulley was pondering how he should paint Sarah Monday, his Eve, his muse. Gulley examined an old painting he had done of her. It was bulky, and the lines and shapes weren't quite right, but there she was, Sarah, the old Sarah, still new and shiny in her bathtub, staring back at him from the canvas, and Gulley knew that he had been on to something when he painted her. He had heard something straight from The Old Horse, and he had gotten it down. He could poke at it with a critical eye, but it wouldn't disappear. Angel listened to the rain through the window and to Jackie's light breathing. He smiled at her, thinking of their day together, and he knew that, like Gulley, he had gotten it right. He slowly climbed out of bed. He peed and then went to the kitchen where he got a Coke from Jeremy's beer cooler. Going out onto the balcony, he watched the rain beat a steady tattoo on the water. When he began to shiver, he went inside, took another sip, and put the Coke in the refrigerator. Back in the bedroom, he pulled a curtain over the window to shield them from the morning light and climbed in bed next to Jackie. He read for more than an hour, closed Gulley, and switched off the light. When he shut his eyes, he went inside his head. There, Jackie and the pattering cadence of the rain made music. He listened and danced silently to it, his music of no tone. Very Keats. Angel felt pure and whole. His anger had dissipated and been replaced by a peace even he didn't understand. He felt for Jackie with his hand and patted her shoulder. She wiggled happily.

At home equally in Palatka, Florida or on the Dartmouth campus, Angel finds love (and pleasure) in nearly every second of his life. You will, too.

R. E. Braithwaite is the author of the widely acclaimed Angel: A Chant of Paradise. He has been a teacher all his life and has an M.A. in Fiction Writing from the University of Florida and a B.A. from Dartmouth College in literature. At Florida, he wrote for and worked with Harry Crews and Nelson Algren.