We’re in DANGER! Who Will HELP Us?

Refugees and Migrants: A Test of Civilization 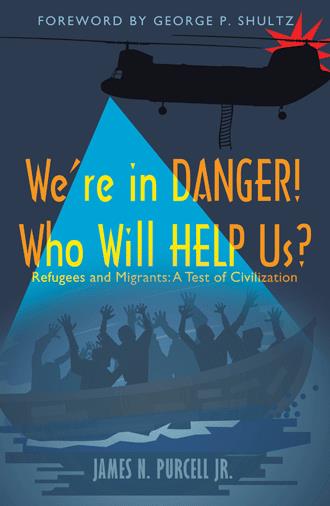 It has been almost a half century since the world came together in Geneva, Switzerland, to launch a global solution to its most vexing humanitarian problem: Indochina. They put a creative and exciting strategic plan in place at a boat people conference in July 1979 and left executing governments the job of bringing the problem to a humane and durable solution. Then, a pulsing world conscience seized on the plight of doomed and drowning souls and forced governments to act. That conscience would not accept delayed or weak responses and insisted that Indochina refugees be placed centrally in government planning and action. It took two decades, yet it happened. Results were historic. Since the era of vast human upheaval in Indochina, I have been in positions to observe the rises and declines in global activism on behalf the world’s endangered, displaced, and disrupted people. As I have pondered and researched the world’s response to the on-going Syrian crisis, I am left heart-broken and angry. There has been no sustained outcry. The world’s conscience has been dormant, gone quiet, and governments have been left free to ignore or trivialize their moral obligations to humankind, to look away from the suffering. I have been astounded that the world’s humanitarian advocacy community, that played such a vital role in Indochina, has been so weak as to be barely audible. And millions of innocent people have been killed, driven from their homes, or made destitute while seeking safety and help. A few advocates have stepped up, but governments have acted mostly with half-hearted indifference, incompetence, or lethargy. They seem to be more interested in self-preservation than in sharing with and helping global neighbors. Civilization’s new test is whether we can help free the world’s conscience from the bonds used to tie it down and, once freed, to stir our hearts and minds to regain a sense of moral outrage, purpose, and resolve to face its responsibilities directly, no longer to look away, to act. Caring societies cannot continue to hide from these daunting challenges and shirk their moral duty to endangered brothers and sisters. That does not mean we need to bring all the world’s needy to our shores or assume responsibility for all its destitute. Far from it. But, as caring members of the international community, we must determine our appropriate and equitable roles in solving systemic dysfunctions that bring people to the brink of despair and equitably aid those we can. While ever-vigilant to deny entry of terrorists and criminals, let us not let fears blind us to the continuing need to welcome deserving refugees and immigrants, as in the past. We must reclaim high moral ground, first by recognizing that civilization is at a crossroads regarding its indispensable role to protect the weak, the most vulnerable, and the defenseless. The world is perplexed, wondering why tyrants like Syria’s Assad, who murder and torture their own citizens with impunity, are not called to account and made to pay for their actions. By all objective measures, we are currently failing civilization’s test. If the international community cannot come together and resolve Syrian and other global crises, including famine in Africa, in a more timely and humane way, the losers will not only be today’s victims, but untold future multitudes who will lose confidence and hope in the humanitarian system—and accept there are no trustworthy defenders. And, how can we neglect or overlook that the extremes of today’s horrors go by many names, and one is barbarism? Shame on us if we become the first civilized society in contemporary times to say we’re afraid, we don’t care, we want someone else to do the heavy lifting, or we don’t know what to do. We can find a better way, and some specific strategies are included in this book and surely there are many others. I invite all like-minded humanitarians and nations of good will to join me in a campaign to meet our civilizational crisis head-on by rejecting fear, timidity, and weakness in defense of the persecuted, the voiceless, the “least of these among us.” Henceforth, I trust we will say when tested, “We will find a way, together.” Perhaps that is what motivated President Trump to defend civilians by responding militarily to the chemical attacks in Syria, April 2017 and a year later. Perhaps that is what motivated Presidents Trump and Putin (on their May 2017 phone call) to discuss the possibility of working toward a cease-fire in Syria. It is far too early to tell whether these are one-off concessions for the sake of expediency or whether they can endure, given past hostilities and disappointments; but gestures like these are significant. For, as the saying goes, “the proof of the pudding will be in the eating.” Until the world’s protagonists and combatants can relate with honesty, clarity, and courage, differences cannot be bridged, and innocent civilians cannot be protected. How nations express or fail to express their shared values and fellowship affects their identities as civilized defenders of the world’s most persecuted and vulnerable. This book is based on the belief that as civilized people, moving forward to better lives for ourselves and others, we can find deep within our souls the courage and wisdom to be keepers and defenders of endangered brothers and sisters. Even as we tend to our own needs, let us not be unwilling to expand our capacities for love and caring for endangered people and keep their needs central in our hearts and attention. Vice President Walter Mondale led the U.S. delegation to the 1979 Indochina refugee conference in Geneva. At a critically low point, he spoke eloquently for humanity when he challenged assembled governments: “… Let us fashion a world solution. History will not forgive us if we fail. History will not forget us if we succeed …. Truly, it’s a test of civilization.” His words still resonate.

Victims of wars, oppression, and famine depend on well-prepared interventions for their basic survival. Yet in the twenty-first century, the world's conscience has gone dormant, and governments have been left free to ignore or trivialize their moral obligations to humankind. Caring societies cannot hide from these daunting humanitarian challenges. As in the past, only experienced, bold leadership can marshal allies for proposed twenty-first century solutions.

We're in DANGER! Who Will HELP Us? is the chronicle of one humanitarian leader's experience working on behalf of civilian victims of war, oppression, and famine, fully revealed in American know-how, initiative, and grit. James N. Purcell Jr. writes from leadership perspectives gained directing global humanitarian organizations and shares his and his team's daring interventions into the humanitarian crisis in Indochina following the Vietnam War and in other world regions—interventions that saved, protected, and restored the lives of millions of refugees. Presidents, feisty congressional debates, and strong volunteer groups helped Purcell and his team marshal allies for twentieth-century solutions, and today he makes the case for the same unyielding spirit for humanitarian crises in Syria, the Middle East, Africa, Asia, and Central America.

Civilization's new test is whether we can help free the world's conscience and regain a sense of moral outrage, purpose, and resolve to face our responsibilities directly and to act. As caring members of the international community, we must determine our appropriate and equitable roles in solving systemic dysfunctions that bring people to the brink of despair—and help those we can.

James N. Purcell Jr. led American and international refugee and migration programs, serving as director of the US State Department's Bureau for Refugee Programs and director general of the Geneva-based International Organization for Migration for most of his career, since 1979. Today he lives in Maryland and works with humanitarian groups.