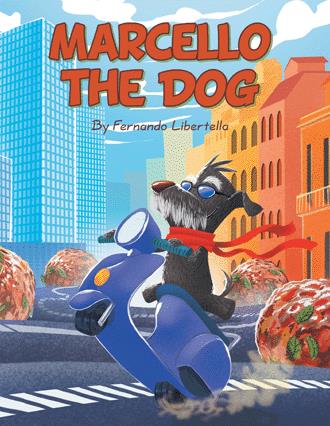 One day Marcello was in a very deep sleep, dreaming of meatballs of course, when the owner of the trattoria came out with the meatballs for the day. Marcello was so asleep that he did not hear everyone eating, thoroughly enjoying all the “meatbally” goodness.

When he woke up there were no meatballs left! Marcello was so hungry! He looked at the bowl again and again, hoping that something would appear in the remnants of the tomato sauce, but nothing appeared. Just as the grumbles in his stomach were growing loud, a delivery truck stopped in front of the building where Marcello lived. The driver ran out in a great hurry with a box to deliver. As Marcello sat next to the truck his sensitive nose detected something he could immediately recognize, but simply could not believe. Marcello could smell meatballs in the truck! Could it be?! Could it?!

Marcello leapt into the truck and began eating the meatballs. As he ate he could not believe his luck, and when he finished he thought it would be a perfect time for a nap. Marcello saw an open box filled with springy newspaper and decided that it was the perfect place to catch a few Zs. Little did Marcello know that he would soon begin the most amazing adventure ever.

Marcello is a scruffy little dog who lives in a brown box outside of a small trattoria in Italy with his five brothers, seven sisters, four cousins, and two great aunts. The best part about his life is the plate of meatballs served by the trattoria’s owner each day. Oh, how Marcello loves those meatballs. He dreams of those meatballs.

But one day, the allure of the meatballs leads him on an exciting adventure. He finds himself in a new home with a new owner and the scent of meatballs nearby. Marcello needs to sneak into the neighbor’s house and get his paws on those delicious meatballs. He concocts a number of ill-fated plans to get what he wants.

Based on a real-life story, Marcello the Dog follows one dog’s hijinks to fill his tummy with delicious meatballs.