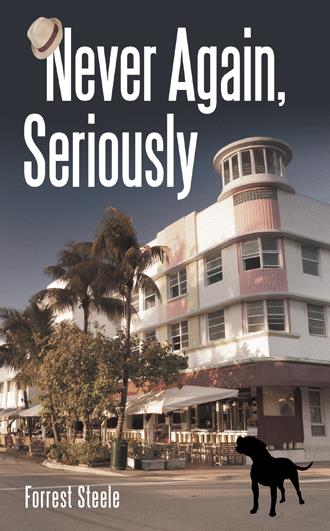 Chapter 1 The image of Malcolm Weaver barged into in Jake Foster’s consciousness unbidden, and the wave of anger that broke over him left behind a rancid residue of despair. He couldn’t understand how the thought of his boss could crush his spirit, but it did. When Jake exhaled a long sigh, the scruffy ponytailed guy on the barstool to his right spoke again in his tobacco-stained voice. “I didn’t mean nothin’ special. Just, you’re good lookin’ and talk like you’re smart. Tall, curly hair, hooked nose. That happen in basketball?” “Sorry. My mind was somewhere else.” “You could be at Guajiro. It’s only a block away, and the chicks there like to party. If that’s what you like.” The guy’s grimy hands and soiled clothing said drifter. He smelled of motor oil. Jake drew away for a better look. The quick motion made his head swim. The man said, “Hey. I ain’t hittin’ on you. Sometimes I don’t say things right, is all. Sorry. Name’s Paul.” Jake shrugged and shook the extended hand. “Jake. No offense taken. I’m comfortable here at Billy’s Dog.” His words came out mushy. Paul’s hand clapped Jake’s shoulder, fingers trailing briefly down. “I hear that, good buddy.” Jake shuddered, unnoticed by Paul, who examined the remains in his beer bottle. “I’m passing through Miami. Left Marathon Key over a fight about my bike. Some asshole thought he was gonna hold it until I paid for repairs, stuff he didn’t do right. Put the guy in the hospital. I’m goin’ up north. If it’s too cold, I’ll come back, especially if there’s a reason to.” Jake shifted on the barstool and leaned slightly away from Paul. “Yeah, you get used to the weather here. Blood thins.” Boozy bar talk had become Jake’s weekend pastime, buzzed out, demons at bay. He had no friends to speak of, no steady girlfriend. He lay awake for hours every night. He always felt tired. Jake muttered, more to himself, his voice breaking. “It wasn’t always like this. Wife left me three years ago. Took her stuff and left in a hurry. Tore me up.” “Don’t worry about it. We all got some kinda shit, don’t we?” Paul swallowed the last of his beer and talked about the owner where he’d last worked, making local deliveries. Something about unfair schedules, how management favored the other drivers. How he never got his last paycheck. “I took care of him, too. Beat the tar out of him. Should’ve killed him. Now that I think of it, that’s what I’ll do. Go back and finish the job, then head north.” Fury assaulted Jake again. Narcissistic takers—Weaver, Arlene, and Paul’s boss. Never giving or helping, just taking advantage. Why do they get away with it? Can’t kill ’em, though. Of course not. If this guy means what he’s saying, I don’t need to be around him. Or even if he doesn’t. I don’t own a gun because I don’t trust myself with one. He had reason to fear losing control. Once, after returning from Afghanistan, he’d gotten into a senseless fight in the parking lot of a roadside bar. It had started when the guy made a remark about his appearance, which didn’t fit in with the seamy clientele. This escalated to a shoving match, and then everything went red. When Jake came to his senses, the guy lay on his back in the gravel. Jake took off, hoping no one had seen, counting on the fact no one there knew him. He read in the paper that the man died. Now, several years later, guilt stayed with him, although he told himself whatever happened wasn’t intentional. Paul had raised his face to the screen above the bar. The announcer’s voice boomed out a news item about fraud at a local jewelry chain. The company’s chief financial officer had vanished with several hundred thousand dollars in cash and jewelry. “Hey, sorry what I said about killing my boss,” Paul said. “I was just lettin’ off steam. I apologize.” Jake cleared his throat and nodded toward the screen. “I’ll bet that guy’s boss is an asshole, too, bet he deserved it.” He sipped his scotch. “Fraud can be simple if conditions are right and you know what you’re doing.” Paul gazed at Jake, concentrating. “Yeah?” “I could make off with a couple million dollars from the sonofabitch I work for before anybody found out. Boy, would he deserve it. That’s not enough money to put Global Source Enterprises out of business, even though most of the loss wouldn’t be covered by their lousy insurance. But it would wipe the grimm . . . grin . . . off his face.” The words had crawled across Jake’s tongue in a sluggish procession. Paul’s eyes opened wide and he lowered his voice. “How could you get away with so much money?” “Security flaws all over the place. For example, I know where the spare key is kept for a supposally . . . um, secure area in the warehouse.” Jake’s stomach churned with alarm as he realized he was blurting out details he should be keeping to himself. How stupid, to be running off at the mouth with a guy like this? Paul lit a cigarette and gestured toward the mirror, where they could see out through the open double door. “Check that out. How some people live.” Miami Beach at full throttle, Ocean Drive, the park, and the beach beyond teeming with beautiful people, affected, on display, posing as though for a photo shoot. Riotous color in the blazing sunlight—Spandex in neon hues, shiny old cars in pastel colors, hair from bleach-blonde to violet to fire-engine red. Oiled bodies, buffed in the gym. Rollerblades. Paul didn’t fit in this hotel bar. The dining room held a sprinkle of well-groomed tourist types, and more people dined in the covered area outside. The lone bartender bustled about filling orders from the service bar, appearing when needed.

Jake Foster is a divorced Afghanistan veteran with PTSD working a crap job for a crap boss in Miami. Malcolm Weaver, owner at Global source Enterprises, has no redeeming qualities. He's pompous and treats his coworkers like trash, so when Jake has the alcohol-fueled notion to defraud the company for a couple million dollars, it seems like a good idea.

Although Jake is usually an honest, regular guy, he's been through enough bad experiences to deserve a lucky break. Maybe committing fraud is just the ticket. After all, "Fraud can be simple if conditions are right and you know what you’re doing." Of course, then, there's the bank auditor, Sharon Scott--attractive, smart, and onto Jake's dirty dealings.

Together, they take the money and run, seeking anonymity and a life of luxury in central Florida. Turns out, though, Jake really isn't cut out to be a criminal, especially when some deadly characters pursue him and even abuse Sharon's younger sister. Bad guys like Jake aren't the worst guys. In the end, Jake might even end up a hero.

Forrest Steele is originally from North Carolina. He retired from investment banking and now lives in Florida.