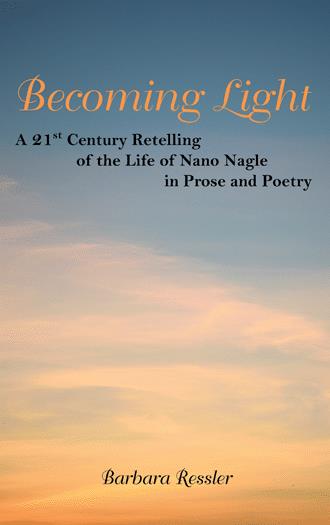 “Prose and poetry, narrative and dream-like interludes vie with each other in a series of vignettes, charting the twists and turns of an amazing journey under the shadow of the Penal Laws. Nano emerges in stages as a bright and vivacious child, as a privileged young woman moving in royal circles in Paris, as one listening to the voices and influences which beckoned her to risk everything for the Reign of God, as Lady of the Lantern on the dark, impoverished streets of Cork. This novel successfully presents a portrait of Nano Nagle which is credible and inspiring. It is well-written and well-structured.”

Department of Theology and Religious Studies,

“Barbara Ressler has taken a unique, creative approach to Nano’s life and spirituality in Becoming Light: A 21st Century Retelling of the Life of Nano Nagle. This original, quick-moving portrayal of Nano, her charm, simplicity, courage, and above all her steadfast love of, and trust in God, fills a void.”

Author of A Dream Unfolds,

“Becoming Light: A 21st Century Retelling of the Life of Nano Nagle, by Barbara Ressler will be especially attractive to this century’s readers. The inventive interweaving of poetry and story in a fast-paced read leaves one wanting to know more about this daring woman called Nano, who challenged injustice with education and empathetic service.”

The Persian poet, Rumi writes, “Respond to every call that excites your spirit.” Retelling the story of Honora “Nano” Nagle, foundress of the Sisters of the Presentation, for the contemporary reader excited Presentation Associate Barbara Ressler’s spirit. “Writing Becoming Light, the story of this eighteenth century Irish woman brought me great joy. I hope readers experience inspiration from her life as I have.”