A Holistic Approach to Change Management

by Joel Bigley & With Kent Rhodes 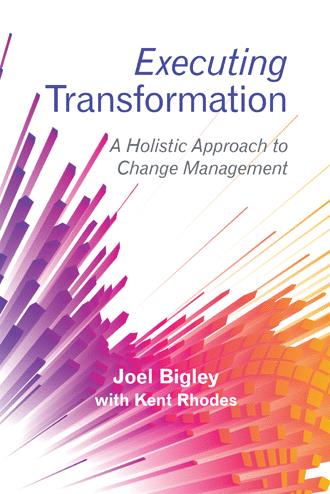 PART I: IntroductionPART I: IntroductionSuccess rateSeveral recent articles have indicated that the success rate of change management efforts is surprisingly low, given the amount of information available on the topic. In fact, as reported in the Journal of Change Management (Hughes, 2011), most studies indicate that 60 to 70% of change initiatives for organization-wide projects fail to meet expectations. Other sources consistently suggest that the failure rate to meet expectations is likely to be closer to 70%. It might be surprising that this failure rate occurs even though the discipline of change management has been in existence for more than 50 years. Moreover, even though an Amazon search yields over 100,000 books about this topic, the success rate has remained constant since the 1970s. Confusion continues through the proliferation of more than 2,000 known management methods. Given the current change management success rate, why would anyone try to make a living as a change agent? If the dismal success rate could be a significant driver for leadership turnover among change agents, might mediocrity or status quo be safer? Even though change leaders constantly look for strategies to make things better, this failure rate is frustrating because change leaders know that they will take the blame if expectations are not met on time and under budget. Stakeholders feel it too. When initiatives and leaders fail, collateral financial damage occurs to the organization and to each stakeholder. Taking the organizational damage into consideration, it is no wonder that stakeholders in change activities tend to resist transformation initiatives, preferring instead to continue with their familiar routines. They choose to avoid the familiar pain of short-term failure in favor of the longer-term status quo.Change leadership literature is complex, fragmented, and characterized by diverse approaches and opinions. No single universal change model or best practice to successfully implement change exists. However, organizational change theory does exist, and we can derive various useful approaches from that. Some significant factors required for successful change leadership include:• A clear sense of oneself• Awareness of a changing environment• Readiness for change• Understanding the drivers of change• Knowing how to enhance organizational learning• Origins and mitigation of resistance• Recognizing what constitutes organizational transformationMany companies unable to see change leadership as a process—as well as an art—have gone on one cost reduction initiative after another without sustained success. Participants become frustrated and over-taxed. Lacking the internal capability to effect change, leaders turn to consultants. The consultants are typically paid to assess the situation, but then nothing happens because nothing is changed until the recommendations have been leveraged. To make matters worse, companies often resort to reckless, reactive, and dramatic cost reduction actions that lead to reduced service or quality resulting in negative consequences to the top line. Clients generally do not see this as positive change and look elsewhere to meet their needs. Internally, a series of deployed fads create change fatigue due to a lack of impact. Companies give the transformational activity a pithy name, put it on T-shirts, and distribute shirts to stakeholders. Organizations are kept from experiencing profitable growth when they don’t deal with the root causes behind their performance issues. Adding to the resistance, stakeholders might decide that they will incur less risk by simply leaving the situation alone and see where the current path takes them. Maybe circumstances will change, and the organization will get lucky. A hero might appear on the scene and save the day. This may feel like skiing down a steep slope with your eyes closed. An operational posture like this can easily turn unrealized opportunities into unmitigated threats. While your organization is trying to cut its way to success, are competitors dealing with the issues at hand? At what point in an organization’s life cycle does the rate of change become meaningful for survival?Navigating the competitive landscape is probably not as difficult as it seems. Hope exists because a few companies in every industry show consistently superior profitability relative to their peers. They are nimble. Their employees are engaged. Service is good, very few mistakes occur, and when they do happen they are corrected quickly never to reoccur. A common theme among these companies is their ability to adapt their businesses to change continuously, quickly, and consistently over long periods of time (Williams, Worley, & Lawler, 2013). When the competitive environment changes, these companies are already poised to exploit the opportunities in their markets. In order to have a long run of success in a global setting where the competitive environment requires significant business change, a company needs a culture of agility. This culture must enable organizational transformation as a matter of routine. Drastic change should be an expected event, not a surprise. Stakeholders should expect or demand it as transformation supports their own prospects of success. For organizations embedded in a culture of routine and slow incremental change in response to their environment, this is a paradigm shift. Successful companies can make change happen more quickly and reliably than their competitors. Agility confers a competitive advantage. In some cases, resilient companies can survive a major disaster and emerge stronger and better, rather than bankrupt. For example, a company might diversify or shed ancillary businesses that are unprofitable with little hope of recovery. A company might restructure to reduce overhead. It could move its headquarters. It could move athletically into new markets with its core products. Any number of combined strategies could emerge as part of a dynamic and flexible recovery or renewal plan.

With the competitive landscape changing faster than ever before, leaders understandably favor what has worked for them in the past.

But that kind of approach doesn’t give anyone the motivation to develop new and better strategies to execute and navigate change. As a result, change leaders and practitioners find themselves asking the same-old questions:

• With no time for failure, how can initiatives be moved forward?
• How do you fit the right change method to the change objective?
• How do you create a roadmap that is designed for success?
• Why do some organizations succeed with change while others struggle?

The authors also propose a holistic meta-framework to create a path for enterprise-wide change. With the insights from case studies, you’ll learn how to create a customized and robust transformation plan for your own organizational change initiatives.

Joel Bigley and Kent Rhodes have been working in high stakes change management for more than twenty-five years in a variety of businesses and organization types. In this book, they combine their experiences and reveal a method that any person involved in organizational change can use to get better results. Their experience includes turnarounds, integrations, start-ups, green/brown field initiatives, as well as overall organization recalibration around new expectations.