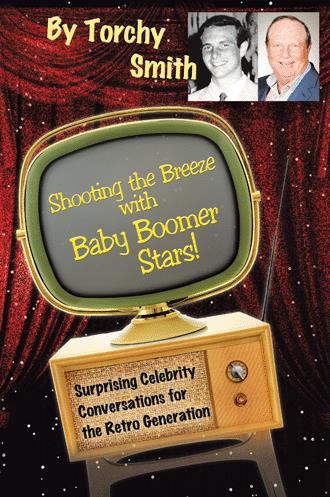 Popular TV and film of the American 50’s and 60’s evolved over time, but themes of family and fun never wavered. Many Baby Boomers look back and miss those old days, but surprising, hilarious, and even shocking stories hid in Dark Shadows despite so many Happy Days. Now, secrets are revealed as celebrities share their memories and mishaps.

Shooting the Breeze with Baby Boomer Stars is a collection of first person stories and histories shared with Baby Boomer radio host, Torchy Smith. Torchy’s celebrity connection began before his own kids entered the entertainment business. He always had an interest in seeking a way to combine his nostalgia obsession with communications, which resulted in his own radio show where he interviewed actors from the past.

Read trade secrets never before revealed as stars chat about being on set for Animal House, Star Trek, Leave it to Beaver, and more. Go back in time with Baby Boomer icons as they relive behind-the-scenes snafus and fights all while honoring the glory days of television. Where are they now, and what are they doing? You’re about to find out.

Edward “Torchy” Smith was born with bright red hair in 1947. The nurse brought him to his mother and said, “Here’s your little torch.”  From that moment on, Mrs. Smith referred to her son as “Torchy,” and to this day, he has relatives and friends who don’t know his real first name.