From Fudge to Freedom

From Sweet Treats to Healthy Eats 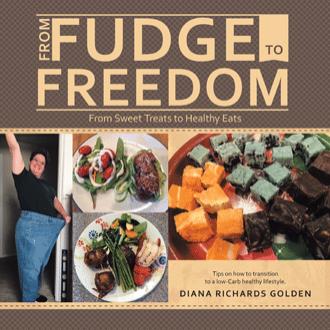 From Fudge to Freedom is a recipe book that includes a variety of options for fudge, pies and various other sweets such as cookies and brownies to healthy low-Carb recipes like cucumber salad with peanut sauce and tips on cooking eggs in a variety of ways. Everything Diana has learned about Cast Iron cooking, using rubs and marinades and being creative with foods is also included in this book.

She has learned much in the past year and wants to share all her new knowledge with you, the reader. Fall in love with food again by learning new ways of cooking and get excited about being healthy.

When Diana Richards Golden went for a routine doctor’s visit, she learned she had borderline diabetes and hypoglycemia. If she didn’t change her diet, she’d probably get full-blown diabetes.

Golden, who loves baking and making sweets, knew she’d fallen into some bad eating habits. She was never a skinny girl, and sugar always drew her to unhealthy foods.

Her health took another bad turn after she suffered multiple strokes. The medication she was put on gave her cramps and stomach aches, and she became increasingly frustrated. Something needed to change.

With the help of her husband, family, and others, she discovered a healthier lifestyle focused on low-carbohydrate eating in just nine months—one revolving around various recipes she shares in this book, including smoothies, marinades, asparagus roasted with balsamic brown butter, blackberry salmon, and sweet treats.

Whether you’re carrying a few extra pounds, suffer from pre-diabetes or full-blown diabetes, or crave a healthier way of life, you’ll be inspired to make positive changes with the guidance and recipes in From Fudge to Freedom.

Diana Richards Golden is not a dietician or nutritionist, but she has struggled with her weight for years. After suffering multiple strokes in 2010 and reacting poorly to medications, she focused on becoming healthy. She hopes to inspire others to pursue a healthy way of life with this book. Diana currently lives in Salt Lake City, Utah.