A Journey of Peace, Justice, Culture, and Environment 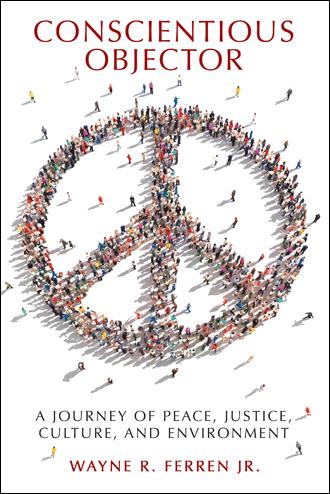 The internet makes connections, and it reveals things you never could have imagined. It also can affect your life in ways you never could have anticipated. In the early 2000s, a friend asked if I had ever looked up my name on the internet; there were hundreds of entries under “Wayne Ferren.” In response, I pointed out I’d worked at the University of California, Santa Barbara for more than twenty years, published various scientific articles, and given lectures or led field trips for many environmental organizations. If every event I was involved in was announced somewhere on a website, the event would likely come up when my name was searched. Lots of folks would find this to be true.
Still, I occasionally wondered about the extent of information available online and if access to this information was useful or not. I was not particularly interested in or curious about what might be listed and considered my recurring reflection on the issue just a natural interest in the unknown. One night in 2002, while working on a report associated with my research on wetlands, I decided it was probably worthwhile to use a search engine and see what would come up under Wayne Ferren, so I Googled my name.
On the first page of the search, among various listings of my activities and accomplishments, was the entry “PANEL 42—VIETNAM WAR MEMORIAL.” My eyes settled immediately on this line. But, I thought, I am a living conscientious objector who in the early 1970s completed two years of alternative civilian service in lieu of military service as a result of being drafted during the Vietnam War. Is this posting some kind of sad joke? A mistake? I thought for a moment. Perhaps it had been concocted by my father, with whom I had not spoken for more than twenty-five years. He disowned me the day he learned his white son was going to marry an African American / Puerto Rican mother with two kids, so he and I had quite a history! I moved from New Jersey to California with my new family in 1978 in part because of this family conflict, which developed in part as a result of my decision to have an interracial relationship. I figured three thousand miles might just be far enough away to reduce the impact of his threats. I knew I was dead to him, but would he really go this far? How did I even come up with the silly idea? How as it even possible? Dad was not that inventive. My mind was reeling! What did it mean? How did it come about?
I read further. To my shock, “Jerry” Wayne Ferren from St. Louis, who also was born in 1948, had been shot down and critically burned in a crash-landing of his plane at Khe Sanh Marine Combat Base in Vietnam on February 10, 1968. He died from his injuries on March 1, 1968, while I was a sophomore at Rutgers University. I stared at the monitor in a darkened room. My mind raced through images of two young men who’d faced similar situations with two astonishingly and tragically different paths. Jerry Wayne Ferren of St. Louis had volunteered to serve his country in the US Marines and was fatally injured in a foreign land during a controversial war. Wayne R. Ferren Jr. of Camden served his country as a drafted conscientious objector, a Selective Service classification obtained after a long defense of his beliefs during this same war. I completed my alternative service and lived a full, active, and productive life.
I have been haunted by this duality ever since my discovery. Now, more than fifty years after Jerry’s death, I have decided to write this memoir. I hope my account of these two young men, and a war forever binding them, will serve as a guide for those who find themselves facing a military draft or other life crossroads and who are uncertain of their path forward.
So, our story unfolds. Along the way, we meet other young lives and experience many milestones chronicling this important period of history.

What would you do if you were drafted to fight in a war?

As a conscientious objector opposed to all wars, Wayne R. Ferren Jr. had to answer that question during the Vietnam War.

He called on his religious and scientific backgrounds as well as his environmental activism to argue that he should be excluded from fighting in, or supporting this war. Following a successful defense of his claim, Wayne served two years of alternative civilian service, which influenced his professional and personal life for the next fifty years.

Decades after his service, he was shocked to find his name on the Vietnam War Memorial, which turned out to be that of another young man with a similar name born the same year Wayne was born. That man died in 1968 when his plane was hit by artillery fire and crash landed at Khe Sanh Marine Combat Base. He will forever remain a teenage father killed in a senseless war.

To this day, the duality haunts the author, and in this multifaceted memoir, he looks back at a lifetime and how his background, scientific training, and transcendentalism have guided him on a path of conscientious objection, service, and conservation, believing all things are sacred.

Wayne R. Ferren Jr. is a conscientious objector who performed alternative civilian service during the Vietnam War at the Academy of Natural Sciences of Philadelphia. He earned a bachelor of geology and a master of biology from Rutgers University. He worked as a botanist at the University of California, Santa Barbara, for twenty-six years, serving in various capacities, including the executive director of the Museum of Systematics and Ecology; director of the Carpinteria Salt Marsh Reserve; and assistant director of the UCSB Natural Reserve System. He is the author of numerous scientific articles and the recipient of many environmental awards and acknowledgments.